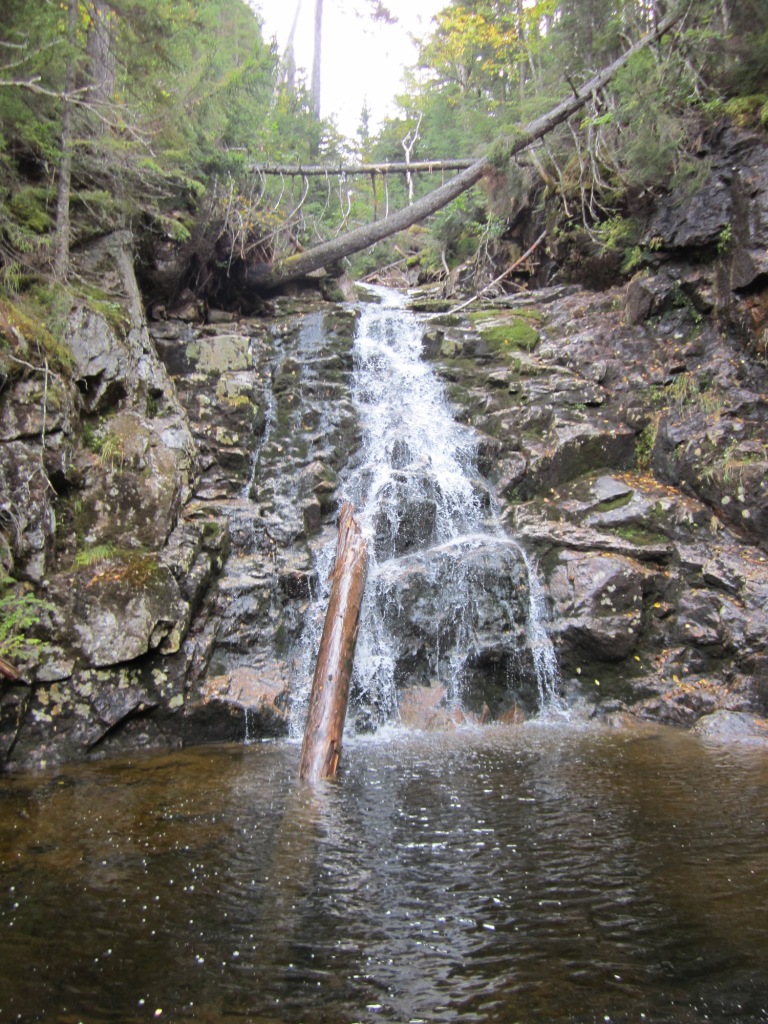 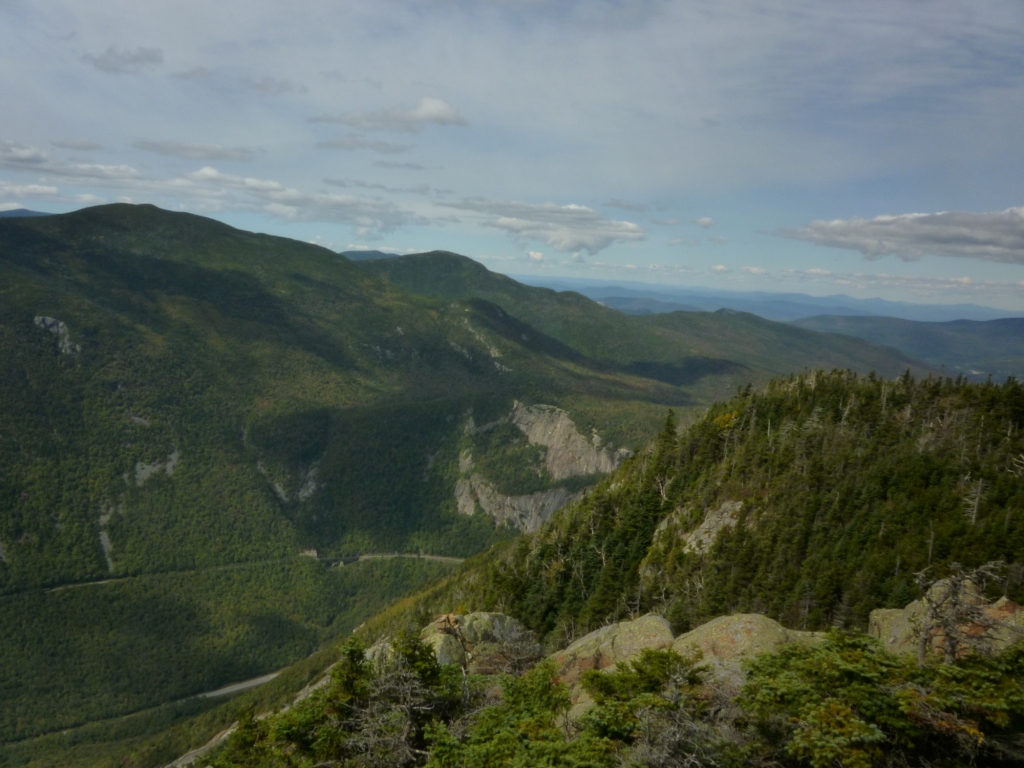 6.5 miles in that many hours may seem very leisurely, but the views from the tops of Webster and Jackson are so nice that it would have been a shame to hurry. Also the Webster-Jackson trail is pretty rough, particularly on the Mt. Jackson side. I've done this loop a number of times and would love to say that there is a "preferred direction" for it but really can't - this time Roger Gagne and I decided to do Webster first. From the trailhead at 1,900' we got to the loop junction at 2,800' and continued on to Webster. Shortly after the junction we crossed Silver Cascade (left). The cascade had predictably much less water than when I had visited it during snowmelt in May of last year, but the same log in the middle of the cascade was amazingly still in place. 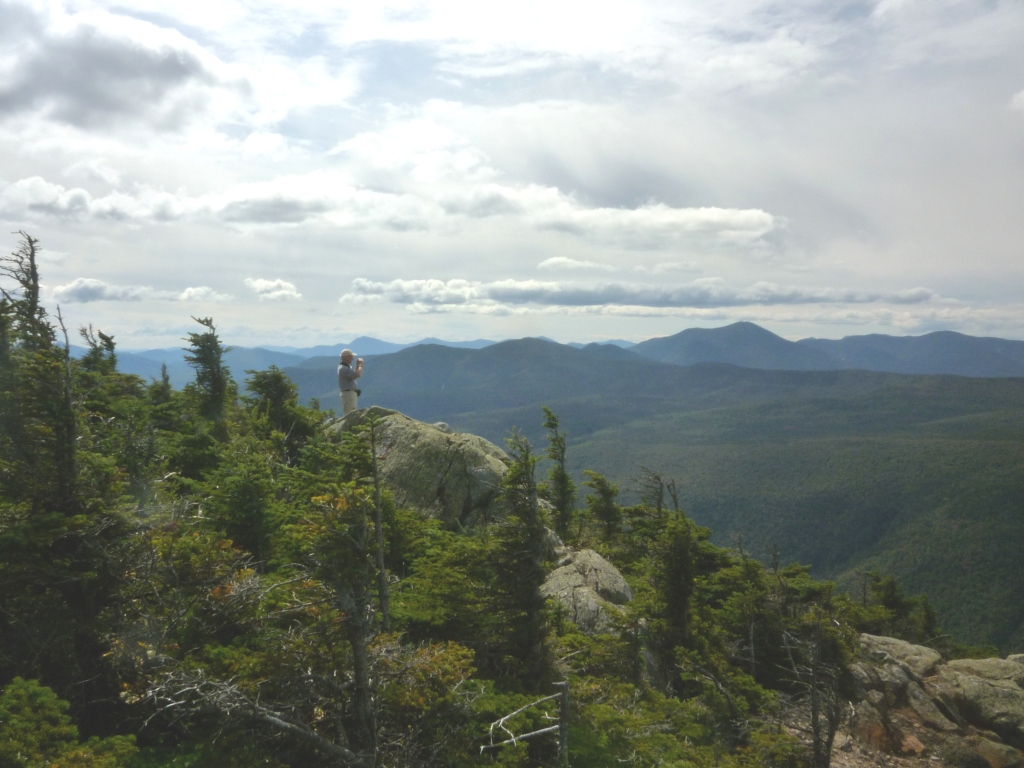 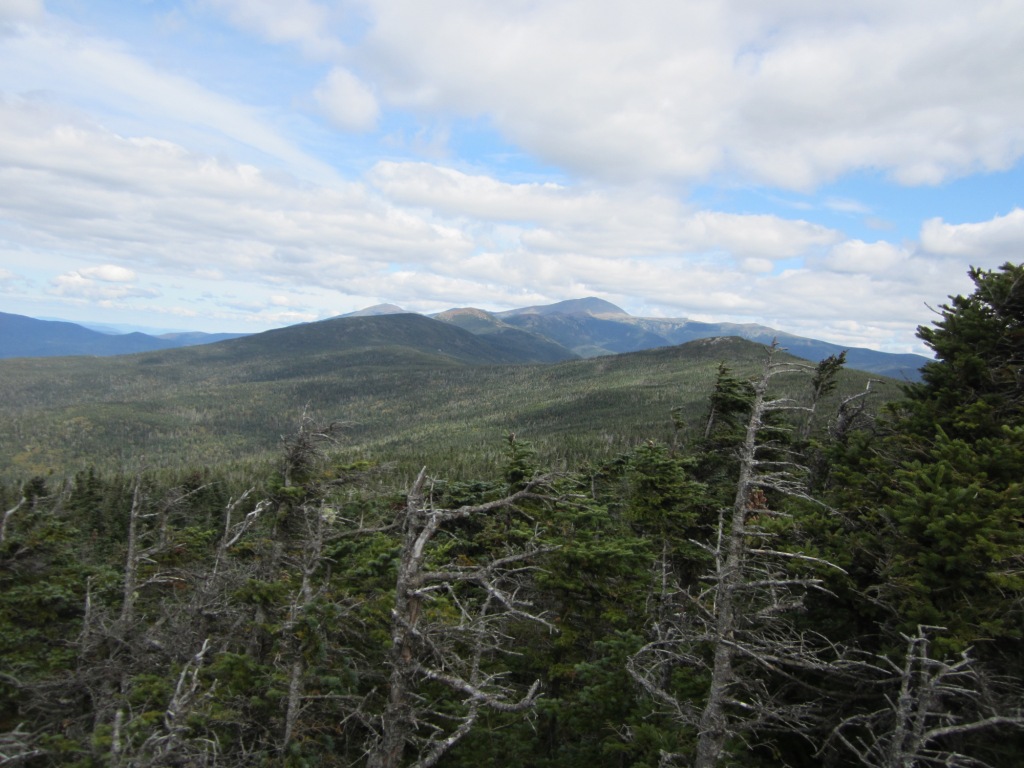 Mt. Webster (3,990') doesn't quite qualify as a 4,000 footer but it has fantastic views of Crawford Notch and of the Willey Range across the Notch (top right), as well as a wide view of the Saco Valley and mountains to the east (left) and of the Presidentials Range to the west (right). The colors were just starting to turn - red maples in the valley and yellow birches at altitude. On the same day last year I had climbed Huntington Ravine with Peter Wyatt and the birches had more color - Nature is a little late this year, no doubt because of global warming. 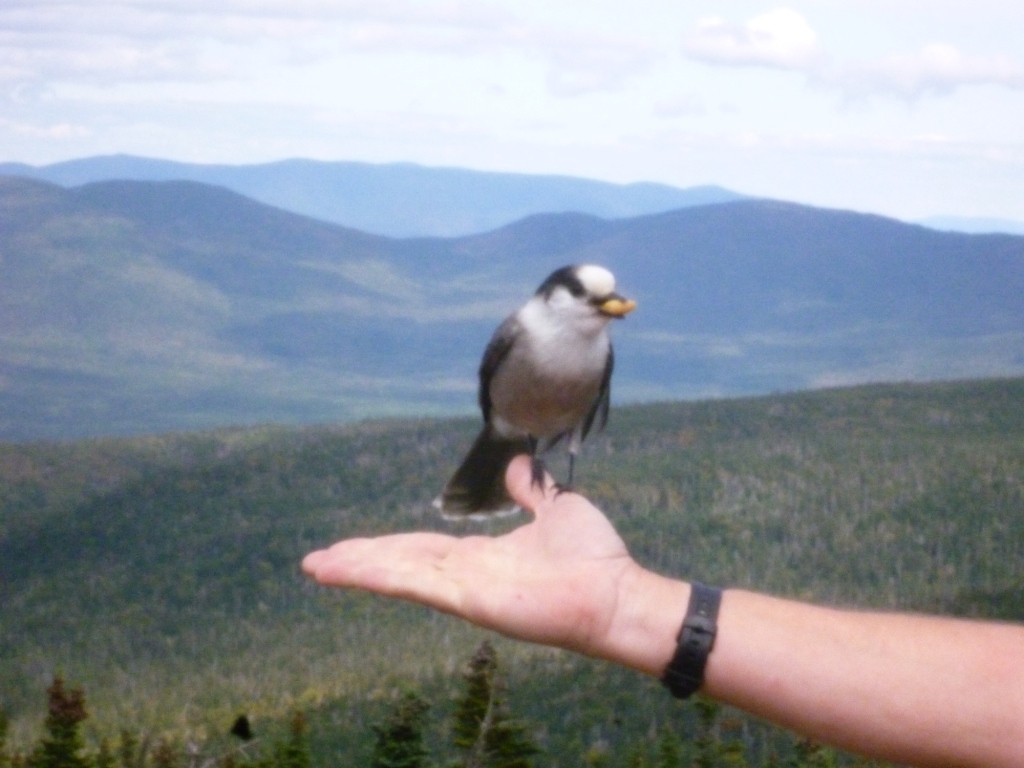 Webster and Jackson are one of the most reliable places to find grey jays in the White Mountains. I had been very concerned not to have seen any of these awfully cute and friendly birds in any of my hikes this year, and Roger and I could not have been more pleased to see that they were on duty at the top of Mt. Webster. They gladly ate peanuts on Roger's hand (left and right). There are a few interesting facts about grey jays, aside from their willingness to eat out of your hand. They live year-round at 4,000', because this is where there is a particular kind of spruce where they can store their food (peanuts, M&Ms, granola, sandwich morsels, etc.) under the bark and access it in winter. Also, they make lifelong pairs, sometimes with a bachelor in tow as friend of the family, which is why you never see a grey jay alone! 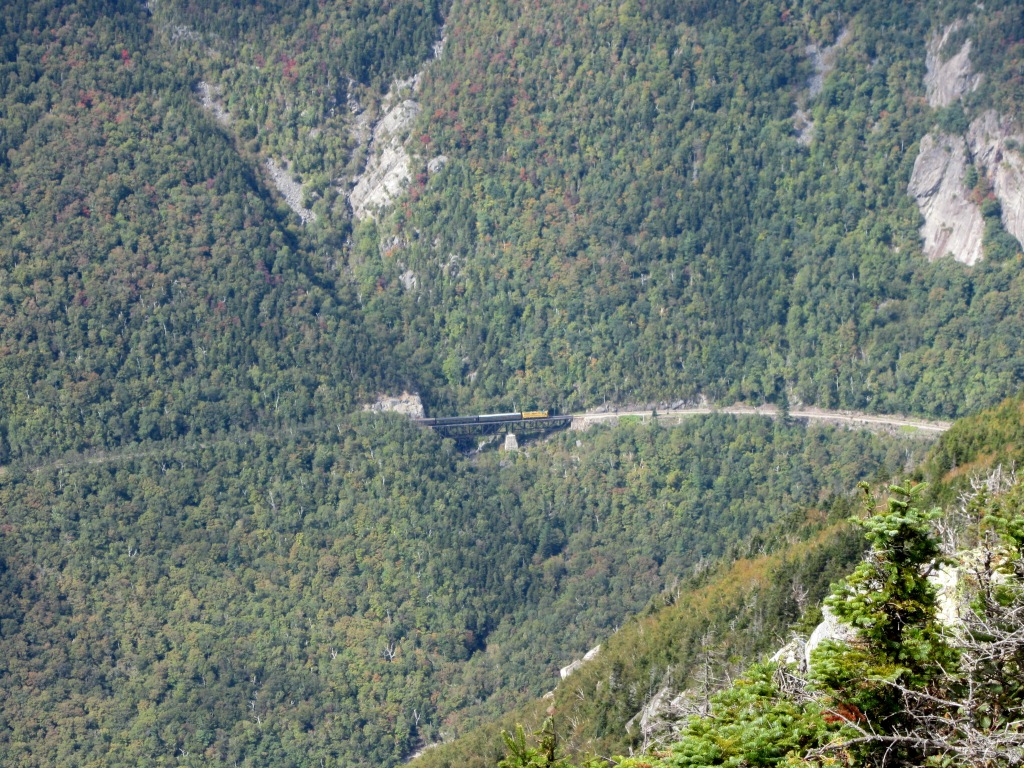 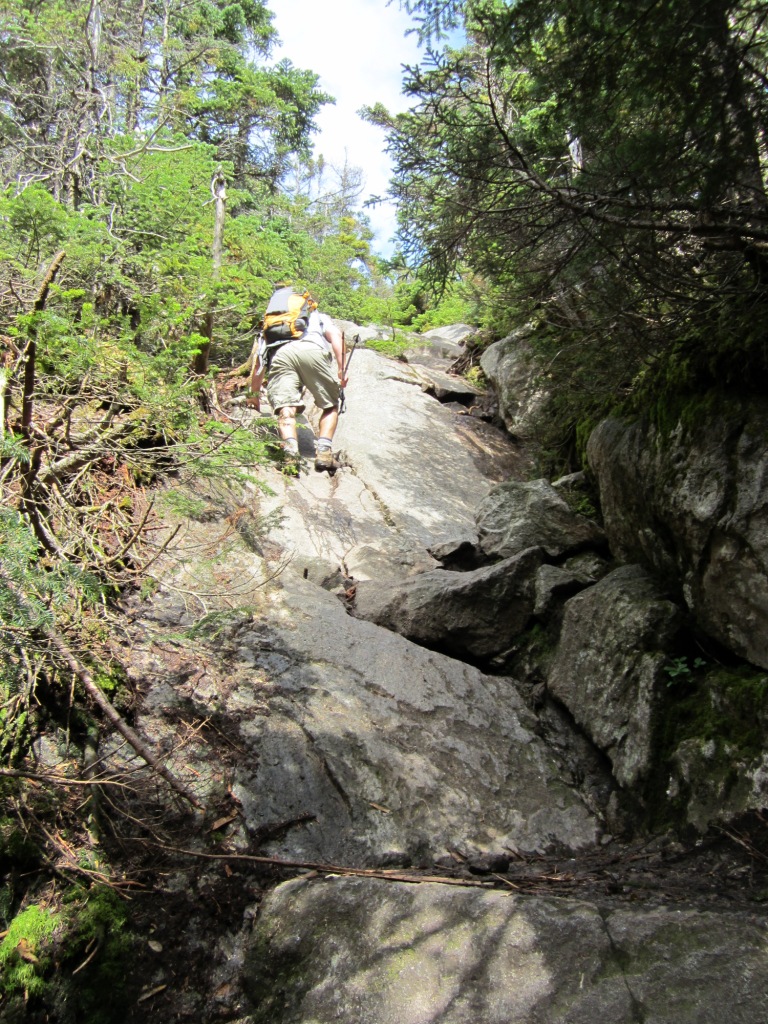 Another great view from Webster is that of the railroad tracks below - an engineering marvel of the 19th century along the flanks of the valley, with remarkable trestles over gullies, and still serving tourist trains. We watched a train going up Crawford Notch (left), and then suddenly stop and reverse to go back to Conway. What happened? An obstacle on the track? This shall remain a mystery to us, but the tourists in the train must have been disappointed. 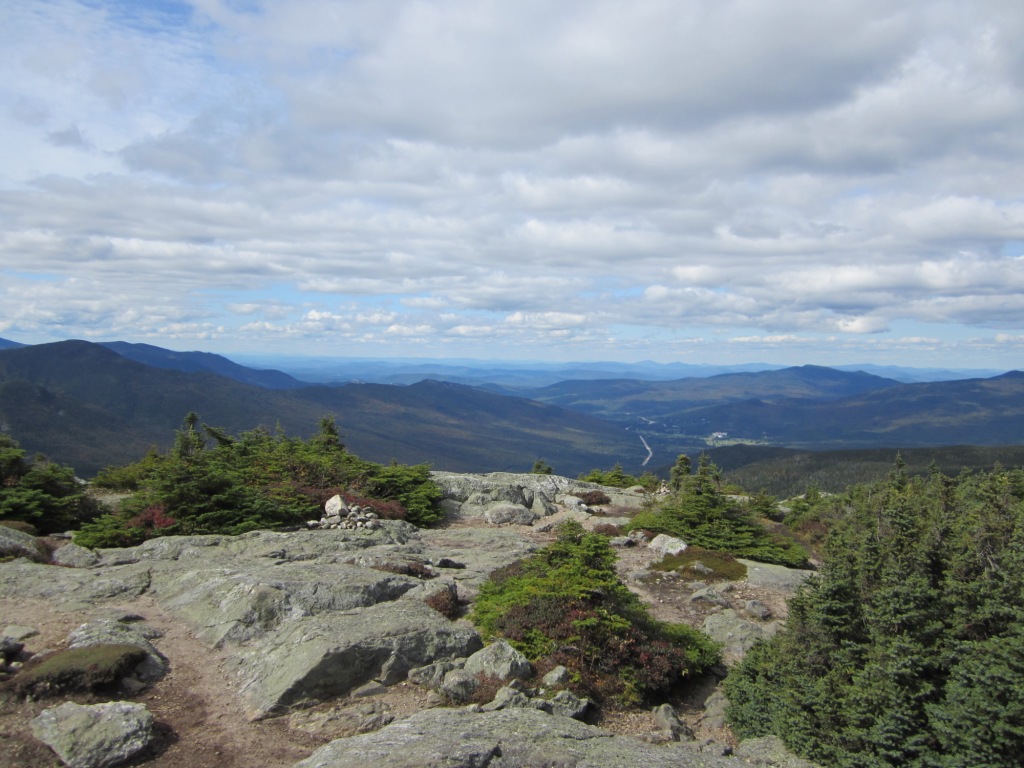 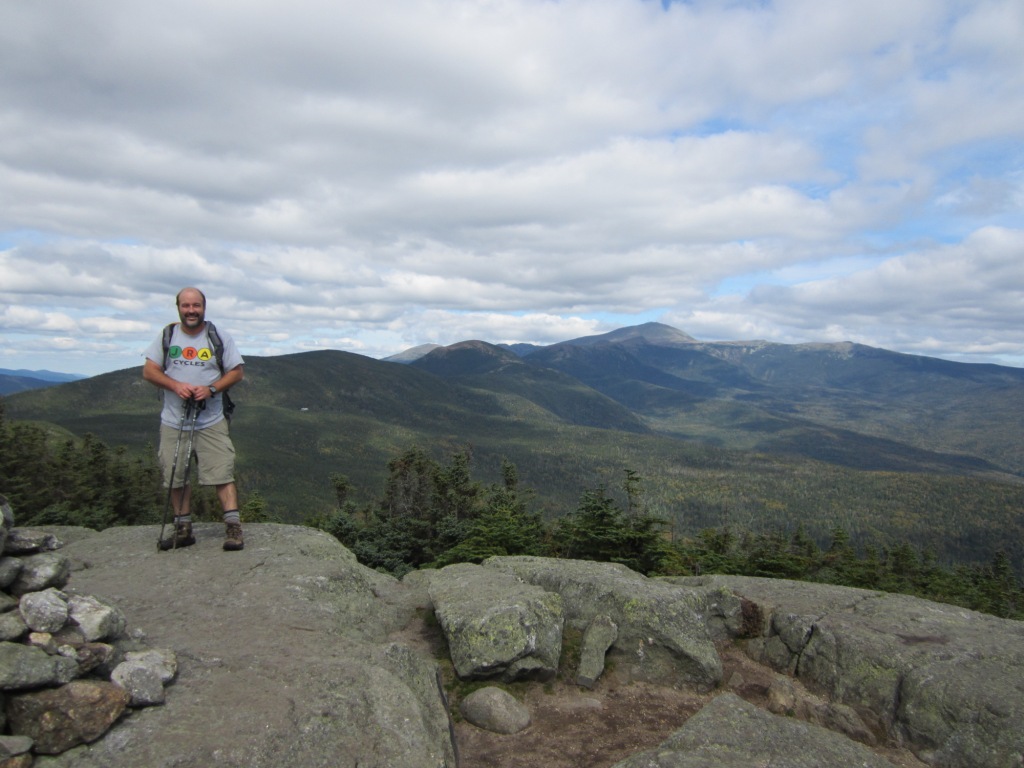 We went on to Mt. Jackson along the Presidentials ridge, a very nice ledgy trail with little elevation and little views, culminating in a steep scramble to the top of Jackson at 4,050' (top right). From the top we had fantastic 360o views, including towards the Ammonoosuc Valley with Bretton Woods (left) and towards the Presidentials with Mitzpah Hut appearing as a speck to my right (right). It had snowed on the Presidentials a few days before (first snow of the season!) but all that snow was gone by now - the only remaining we could see was a tiny speck between Mts. Franklin and Monroe, not even detectable in the picture at right. After hanging out for some time at the top of Jackson we headed back to the trailhead, with steep ledges and then a rocky and rooty traili taking us back to the junction at 2,800'. One could argue that it's better to do this portion at the beginning of the hike and going up, rather than at the tired end of the hike and going down, which would argue for doing the loop in the Jackson-Webster sequence. On the other hand, a case can be made to keep the spectacular view from Mt. Jackson for last, which argues for the Webster-Jackson sequence. Let this remain a point of debate, particularly since it doesn't matter.