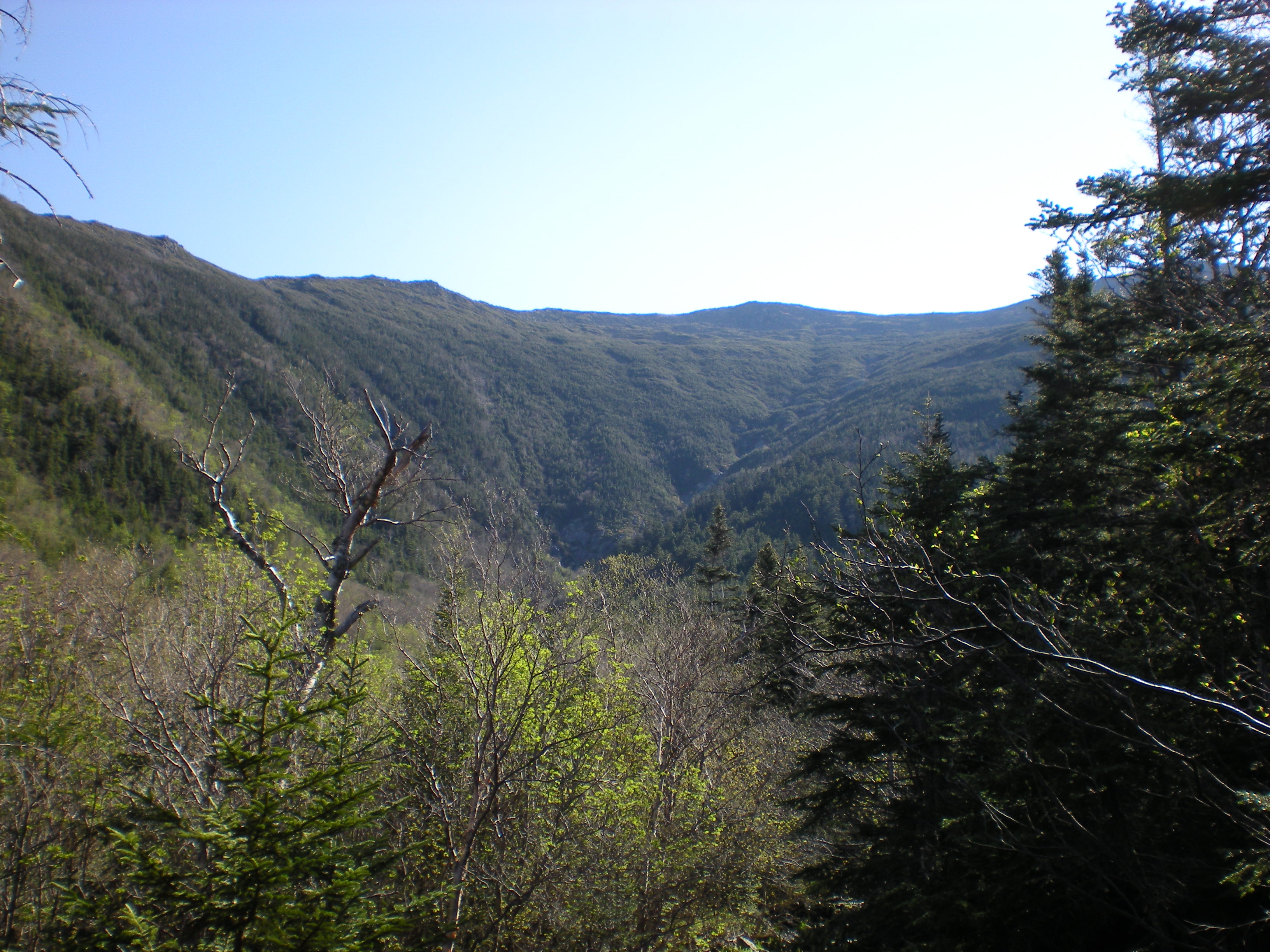 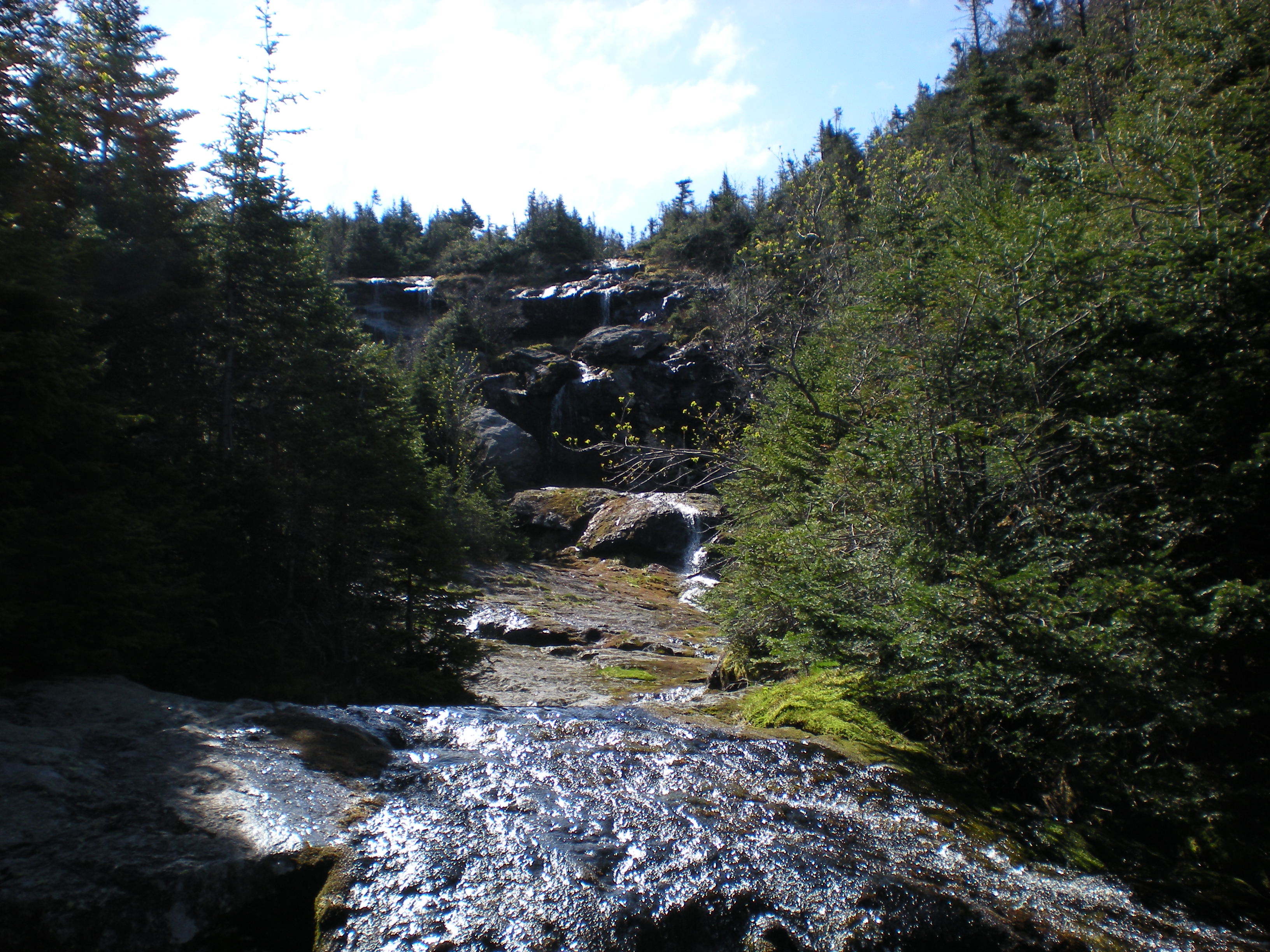 On June 6, Peter Wyatt and I undertook a west-to-east Mt. Washington traverse going up the Ammonoosuc Ravine trail, to the top of Mt. Washington by the Crawford Path, and down Boott Spur to Pinkham Notch where Peter's wife Nancy would pick us up. We initially had planned to go down the Tuckerman Ravine trail but it turns out it was closed because of snow. The Ammonoosuc Ravine trail affords beautiful views of the mountains and the stream (left and right). We encoutered our first snow at 4,100'. 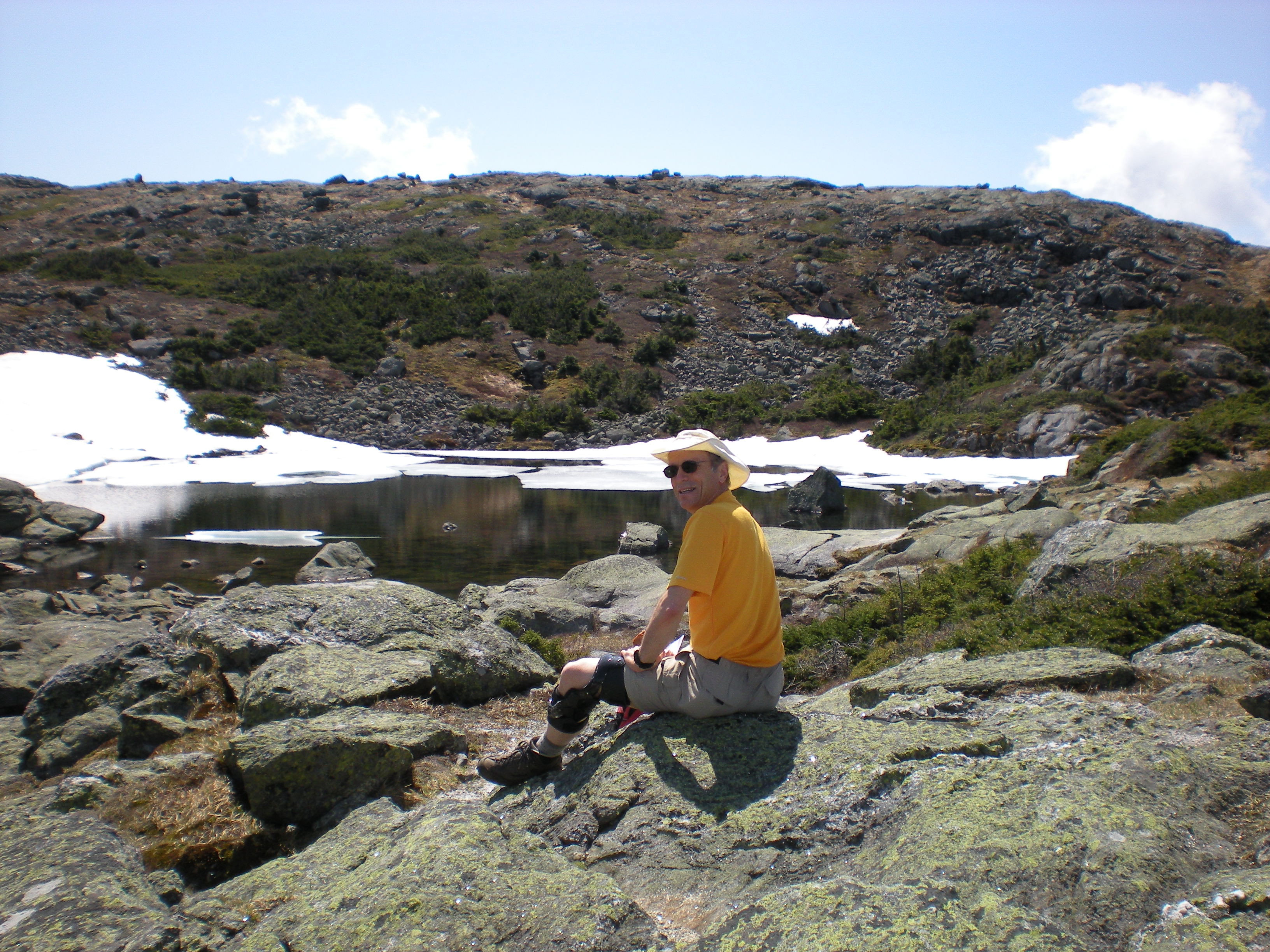 Lake of the Clouds cabin at the top of the Ammonoosuc trail had just opened that Wednesday for the season so we wandered in. A friendly but as it turns out clueless crew member told us we should have "no problem" going down the Tuckerman Ravine trail. We hung out for a while by the lakes (left) before heading up the Crawford Path to Mt. Washington (right) 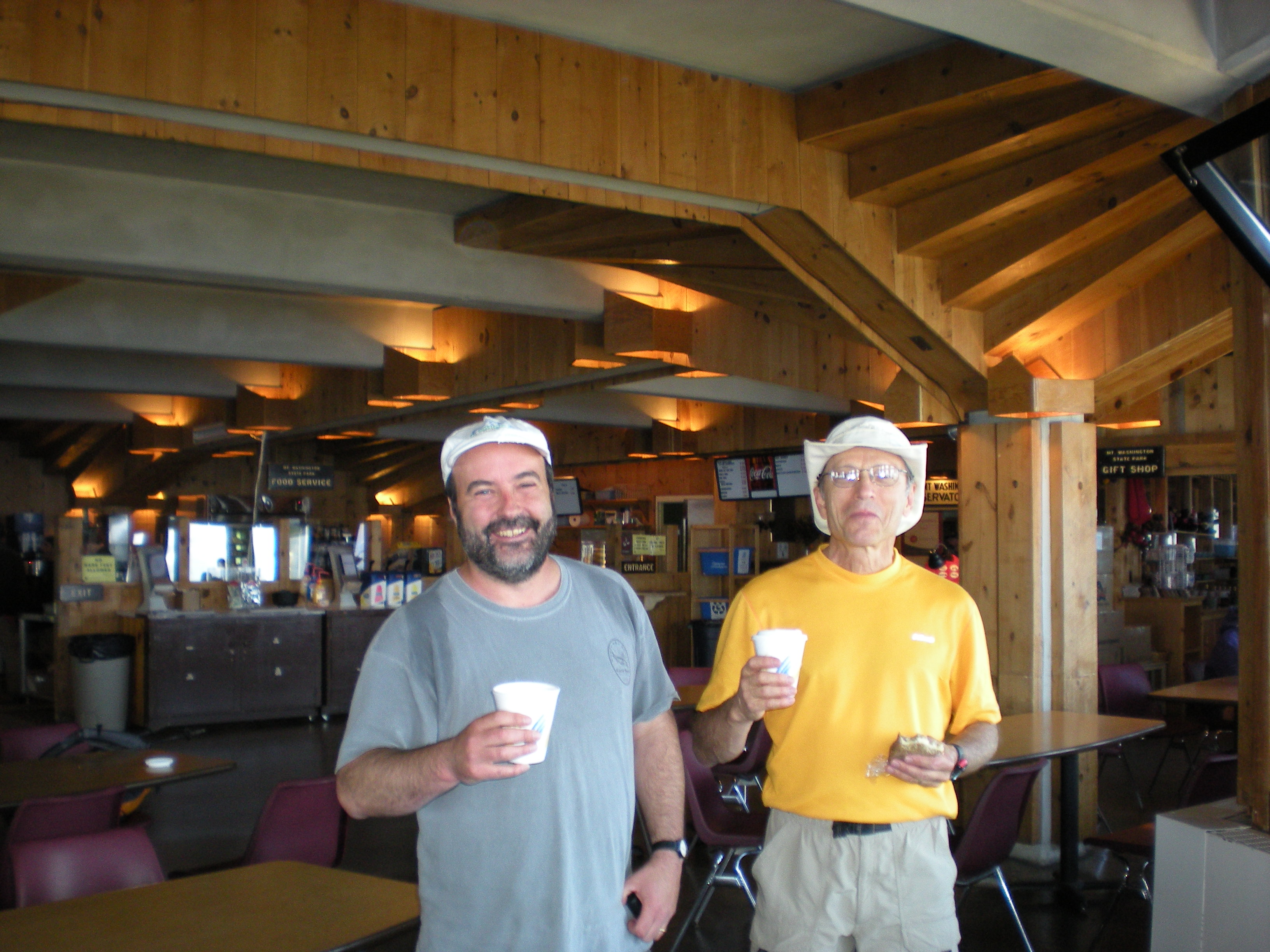 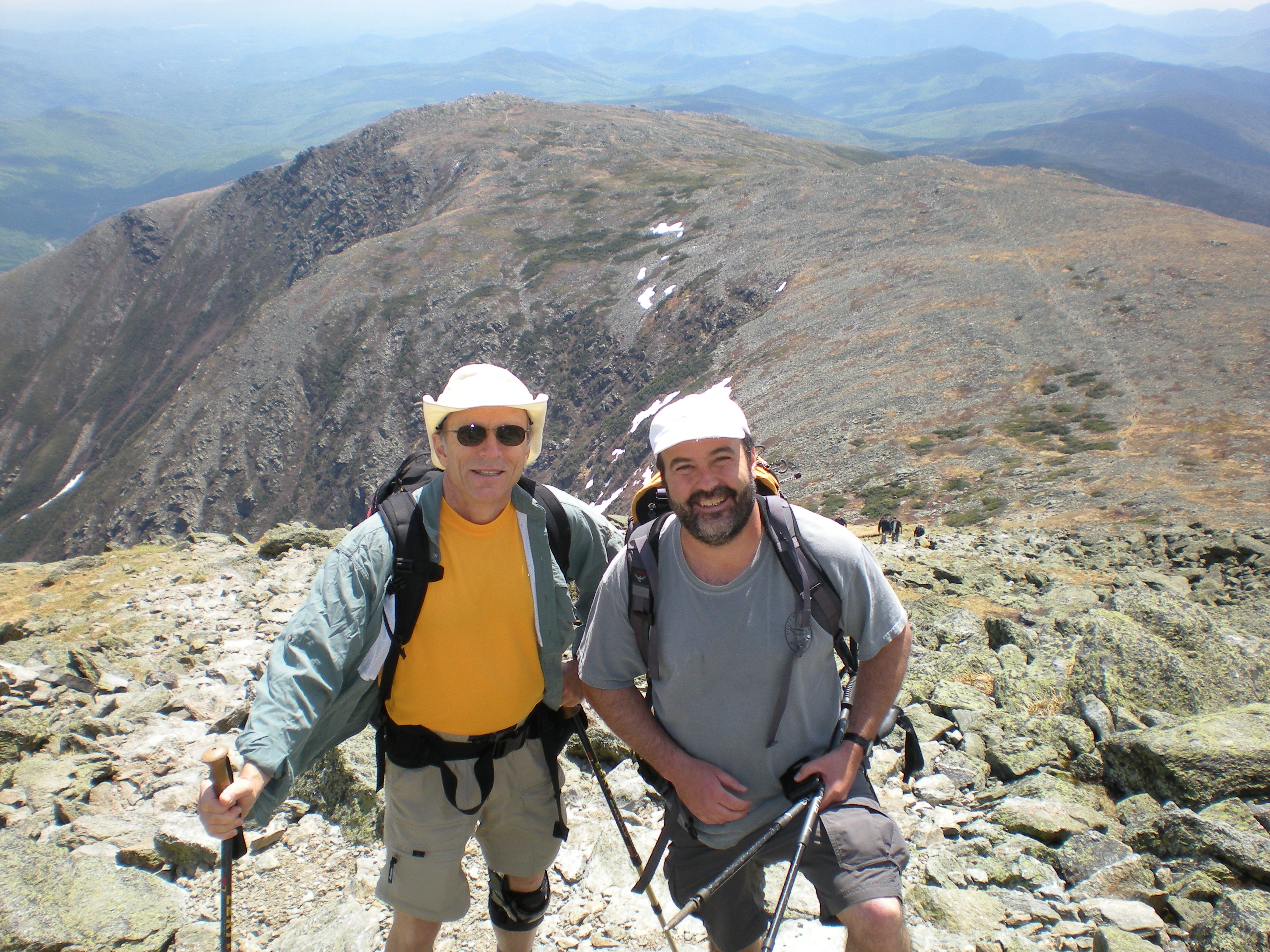 The summit of Mt. Washington is of course a mountain travesty with the road and the Cog Railway spewing hordes of tourists who wait in line to get their picture taken with the summit sign. We could do without this and instead repaired to the Visitor Center for a cup of coffee (travesty has its pluses). That's where we learned that the Tuckerman Ravine trail was closed because of tons of snow. Before leaving the summit we visited the Tip-Top House, which was the original 19th century hotel at the top of the mountain, and that was pretty cool. Fine dining but hard bunks. Here's us at right going down toward Boott Spur (notice line of cairns) with Tuckerman Ravine on our left. 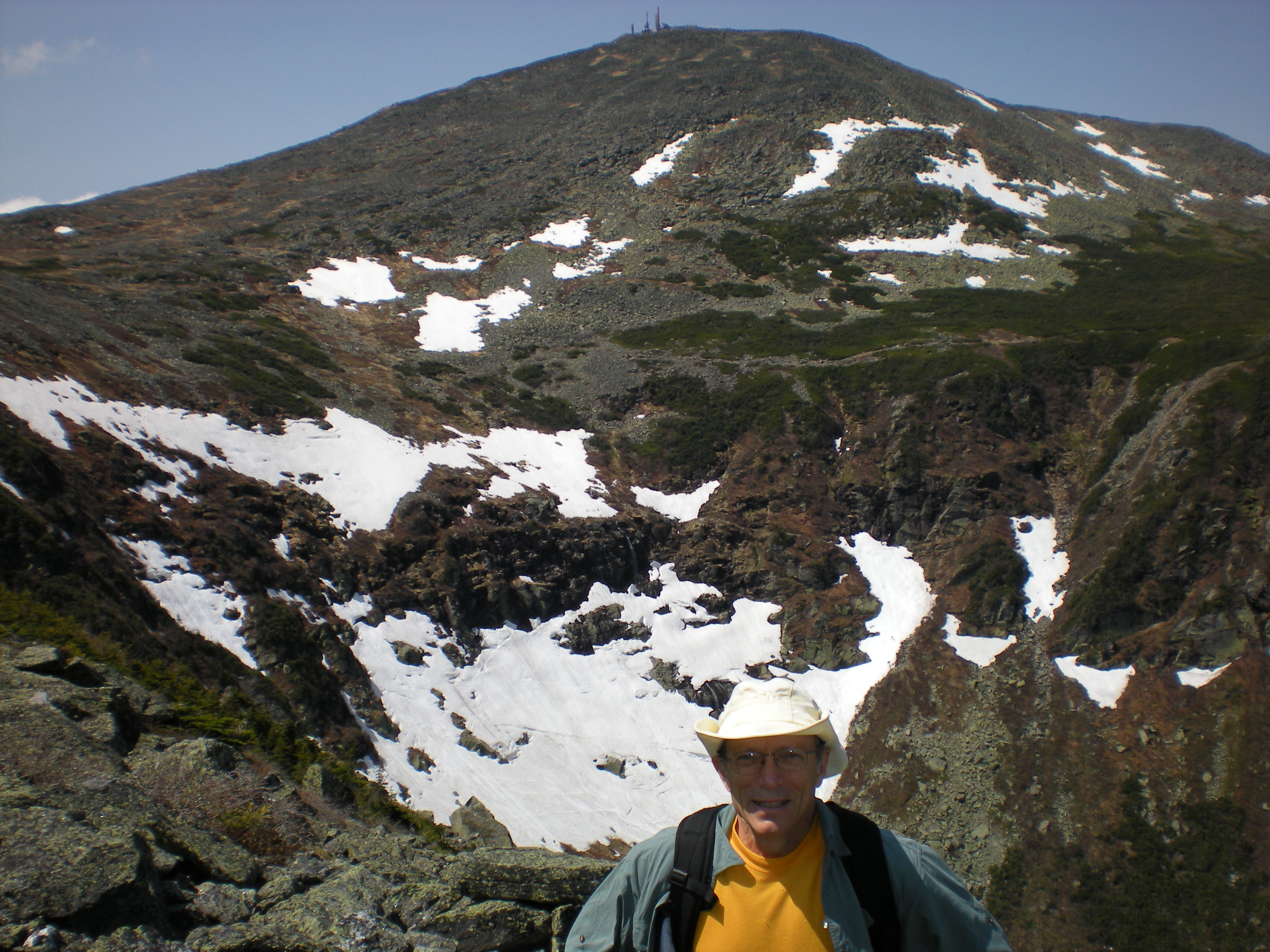 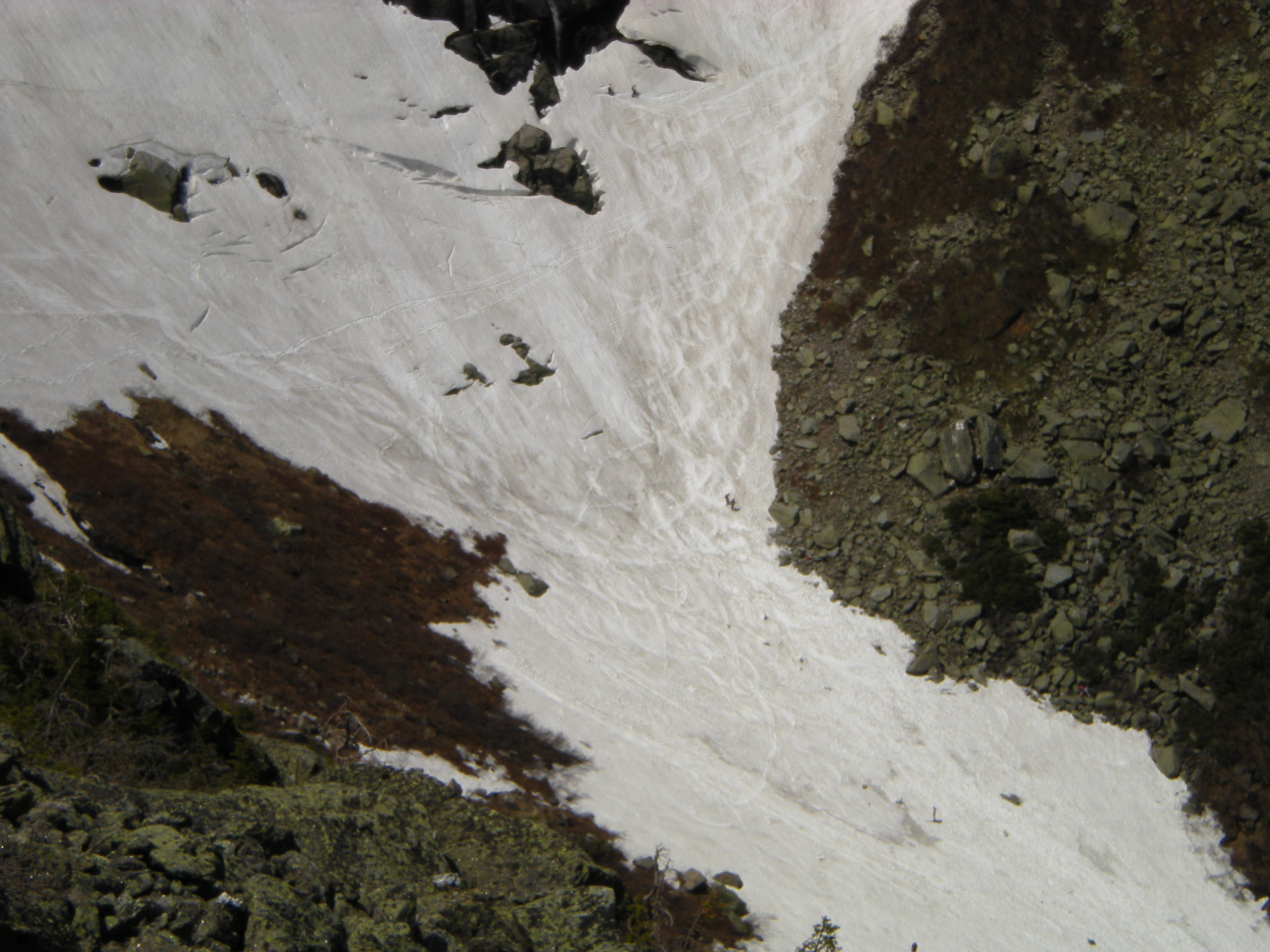 Boott Spur circles Tuckerman Ravine and a big attraction for us was to get good views of the Bowl, so we swerved off trail to get close to the cliff across from the headwall (left). There were still some skiers in the Bowl, as you can see if you blow up the picture at right! And they were having a lot of fun, even though the steepest parts of the headwall and the gullies were mostly bare. Going back on the trail we were rewarded with a lot of views of Tuckerman Ravine, including the full length of the Ravine (pictures below), before the trail finally descended into the forest to end at Pinkham Notch where Nancy was kindly and patiently waiting. This was a lot of fun, with balmy weather above treeline! 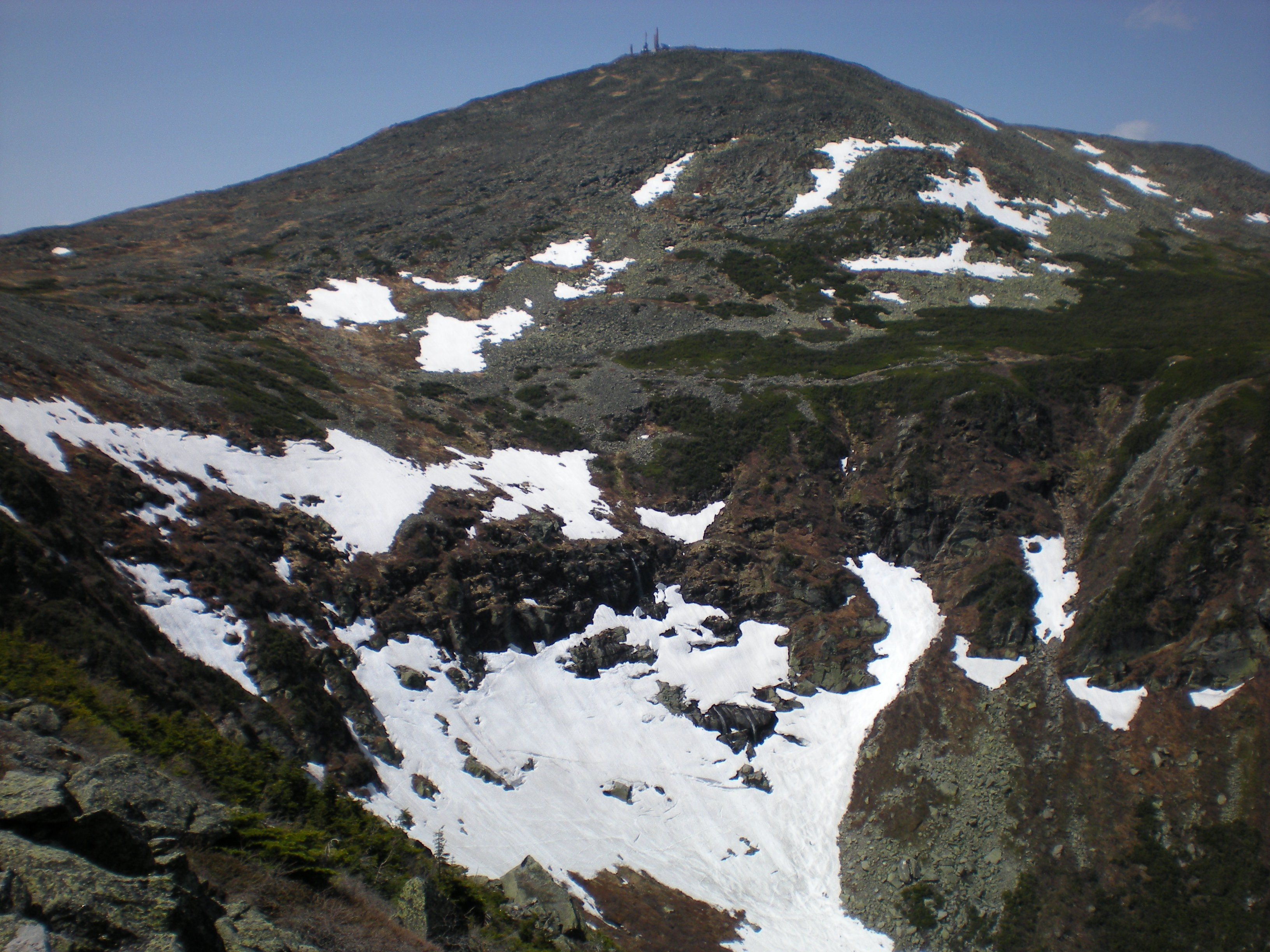 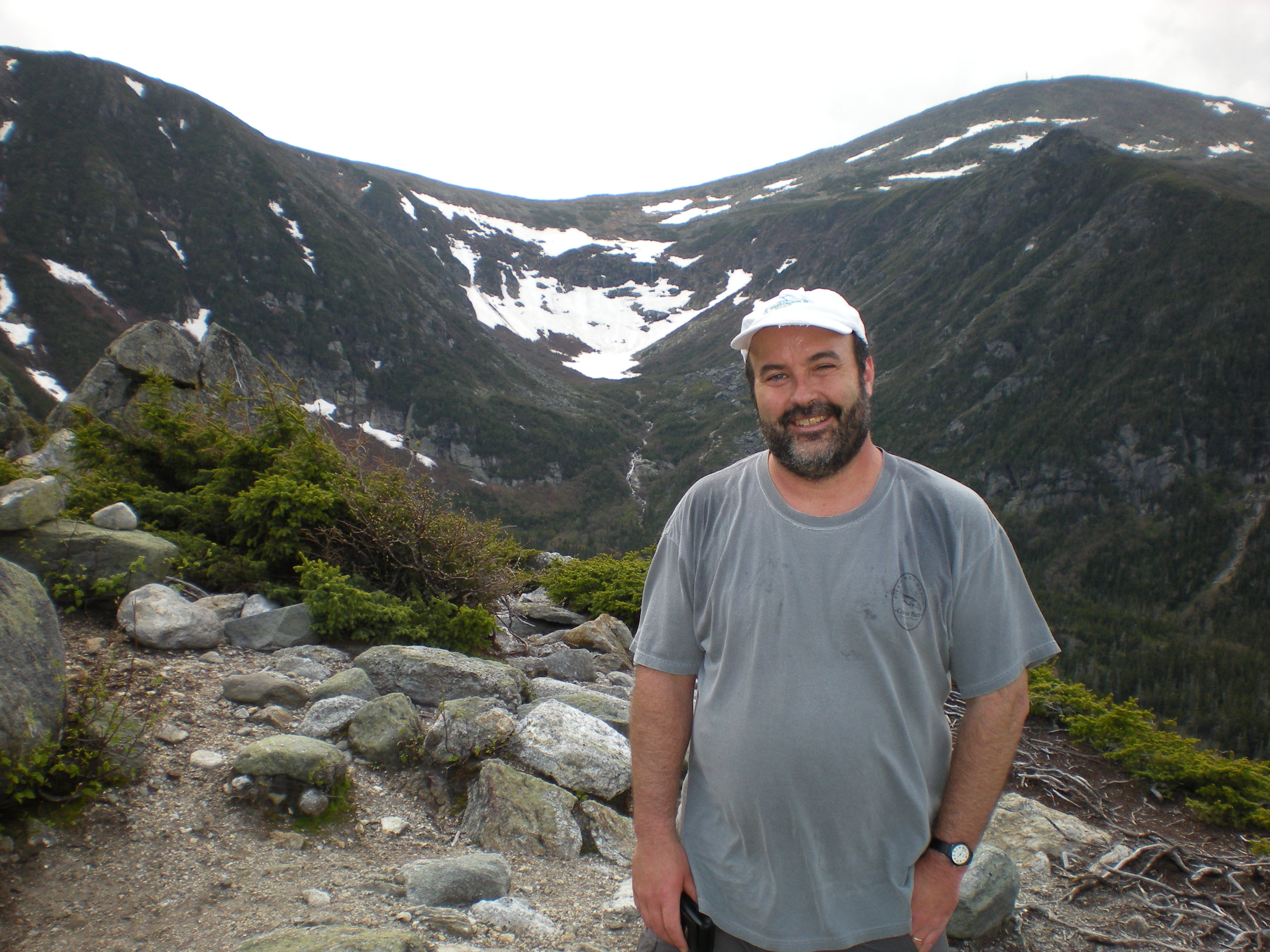 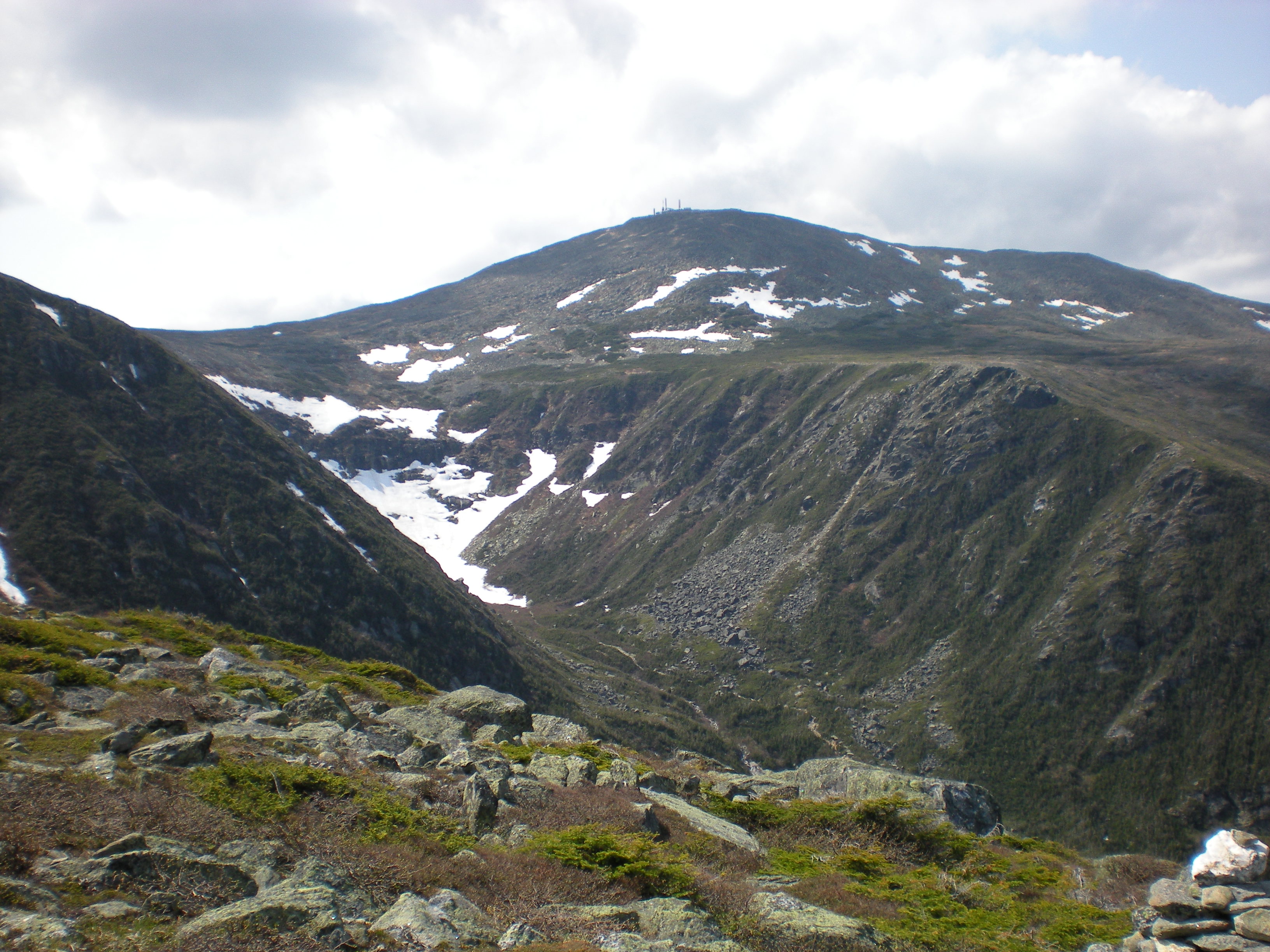