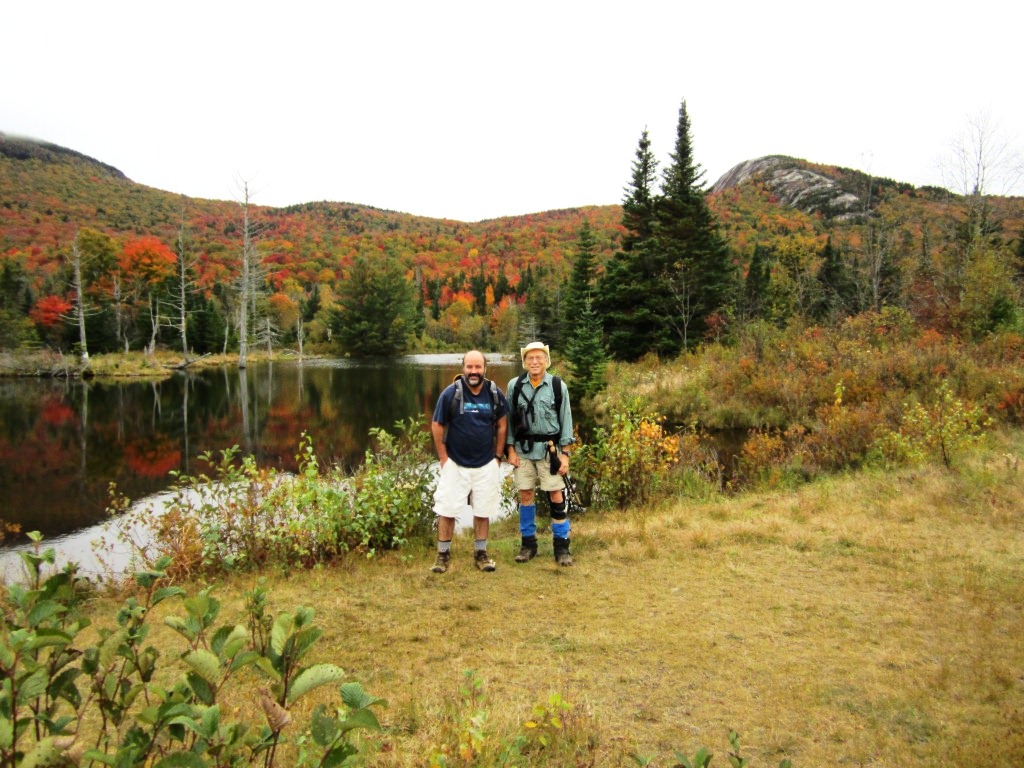 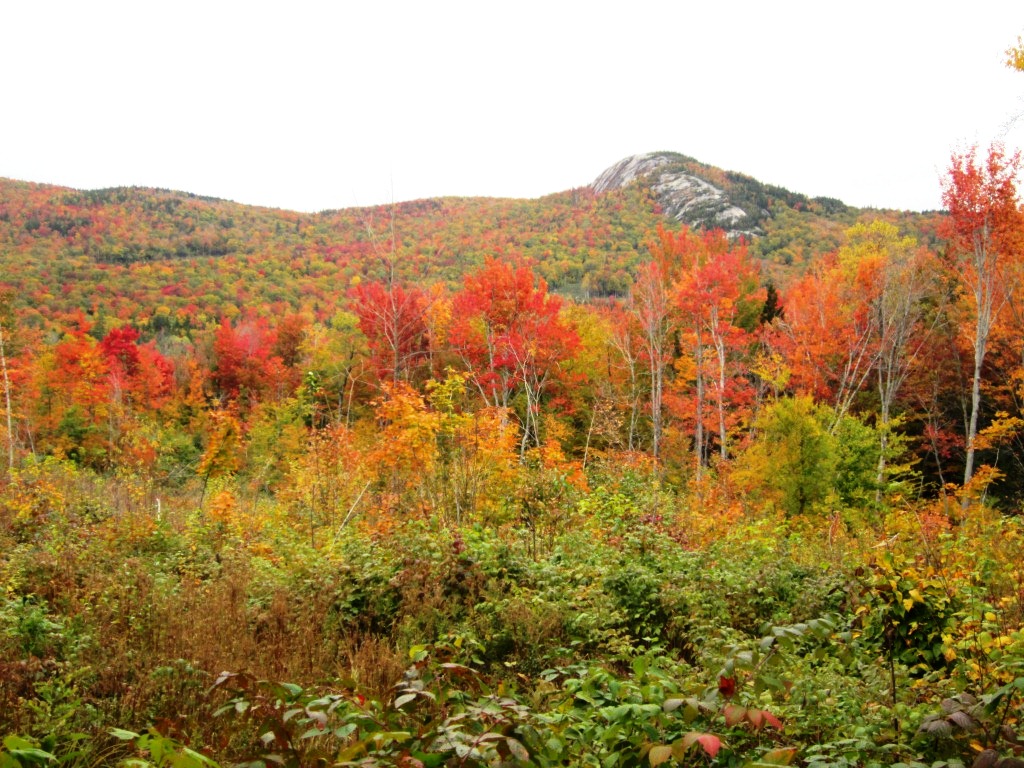 Clouds were hanging low and rain was in the forecast so Roger Gagne, Peter Wyatt and I went on a low-elevation foliage hike into the Zealand valley. We started from the Sugarloaf parking lot, crossed Zealand Rd., and took the snowmobile trail marked "Mt. Field/Mt. Tom" headed toward the backside of the Rosebrook Range. A small sign at the beginning of the trail advertised "Wildlife Pond" which was on a short side trail (left). A little further up the trail was a clearing with propane tanks, probably intended for helicopter service to Zealand Hut. A quest in this hike was to find the "moose graveyard" that our friend Peter Gordon had told us about. Apparently, somewhere up this trail is a place where the NH Department of Transportation dumps the carcasses of roadkill moose. Peter said we should be able to smell it, and that it was quite a sight. But he didn't remember how far up the trail it was. So on we went, with unique views of Middle Sugarloaf (right). 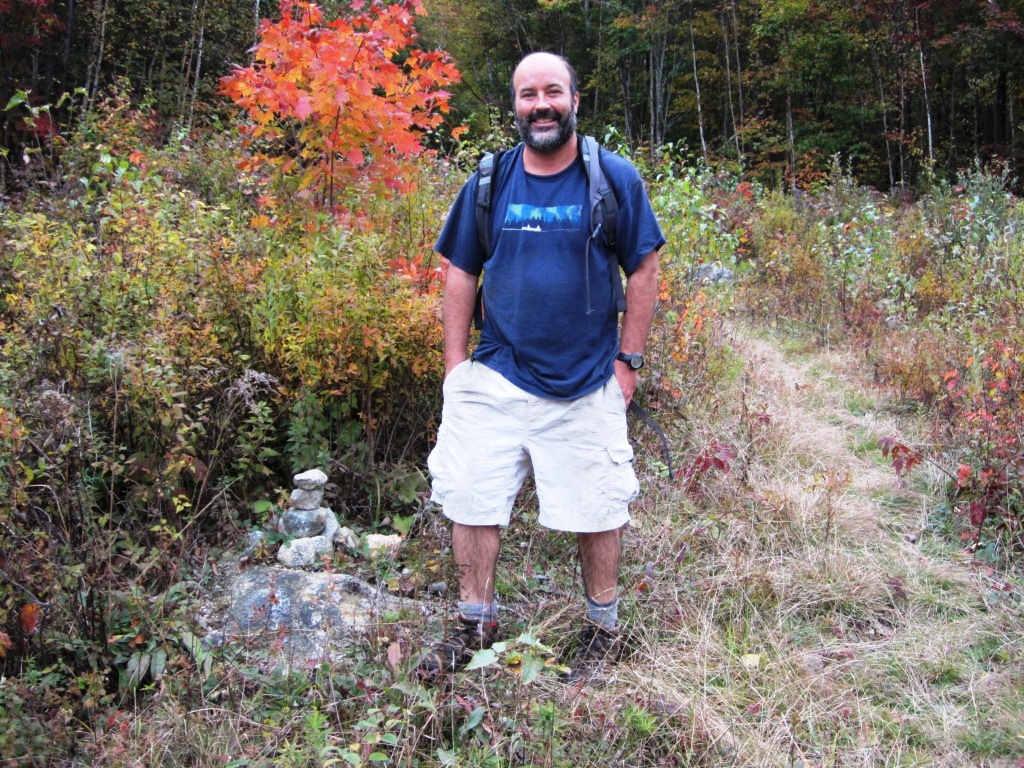 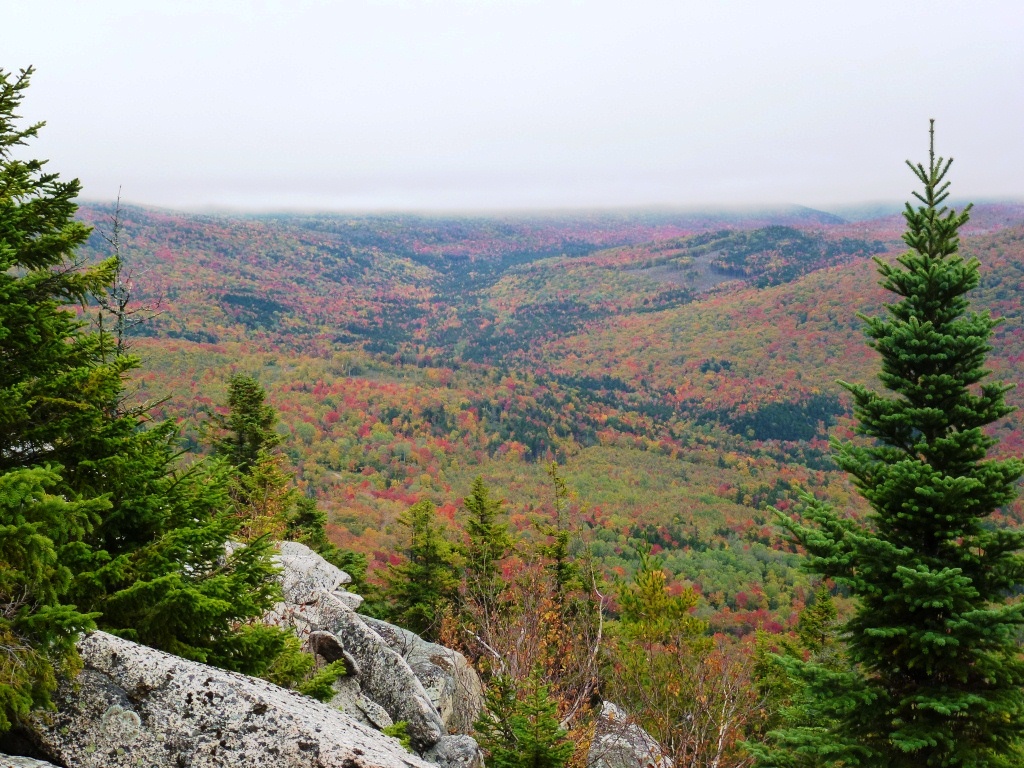 About 20 minutes up the trail we noticed a footpath diverging left, with a small cairn (left). I was curious to see if it would lead us up the back side of West Mountain, which is the western end of the Bretton Woods ski area and has great cliffs pointing down into the Zealand Valley. So we headed up the footpath, and in about 10 minutes found ourselves at the base of steep cliffs equipped with fixed pins for mountain climbing. We skirted the cliffs to the right in search of a passage and eventually found ledges up which we could bushwhack. The rest of the climb alternated ledges and thickets, with wonderful views of the Zealand Valley below the cloud deck (right). 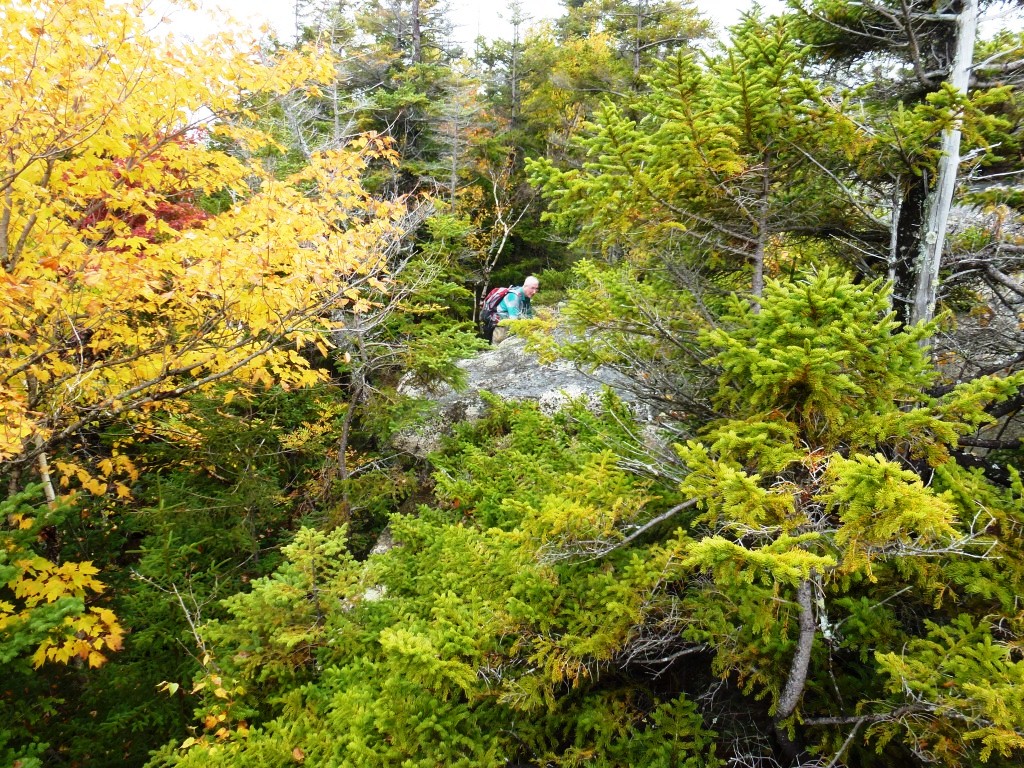 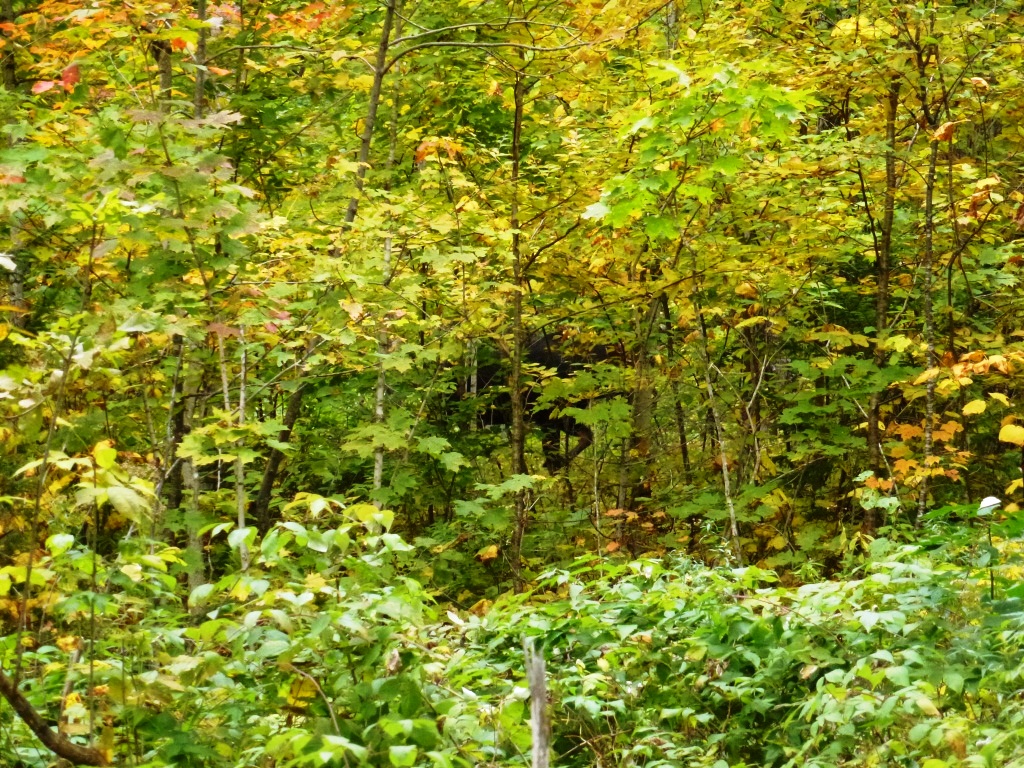 In this manner we eventually got to a final ledge (left) and tada! We were at the top of West Mountain, greeted by fog and by the top of the ski area chairlift. We didn't feel like going back down the way we came so we headed east along the Rosebrook ridge, taking a footpath that paralleled the Boundary Layer Glades ski trail. In this manner we arrived at the col between West Mountain and Mt. Rosebrook, where we saw a trail headed back down into the Zealand Valley and marked "West Wall - mountain climbers only" From all our years in Bretton Woods we had never seen this trail. It was initially in excellent shape but soon became sketchy. Eventually it ended at a cliff with a fixed rope. From there we continued to bushwhack down through the woods, occasionally crossing overgrown logging roads. 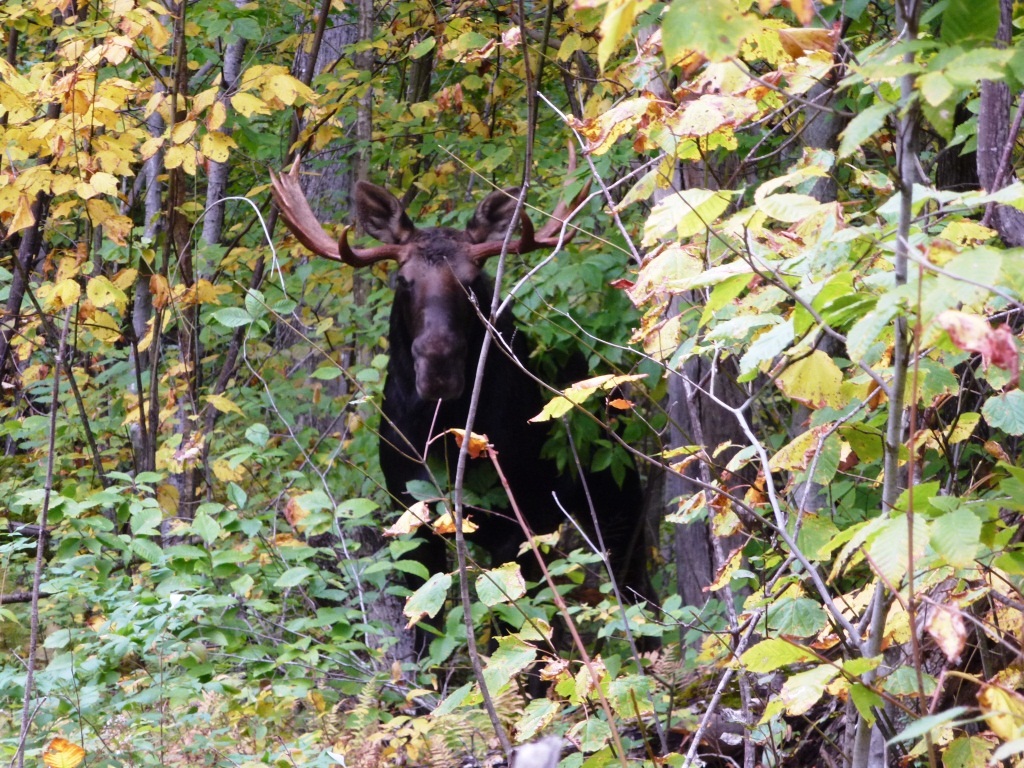 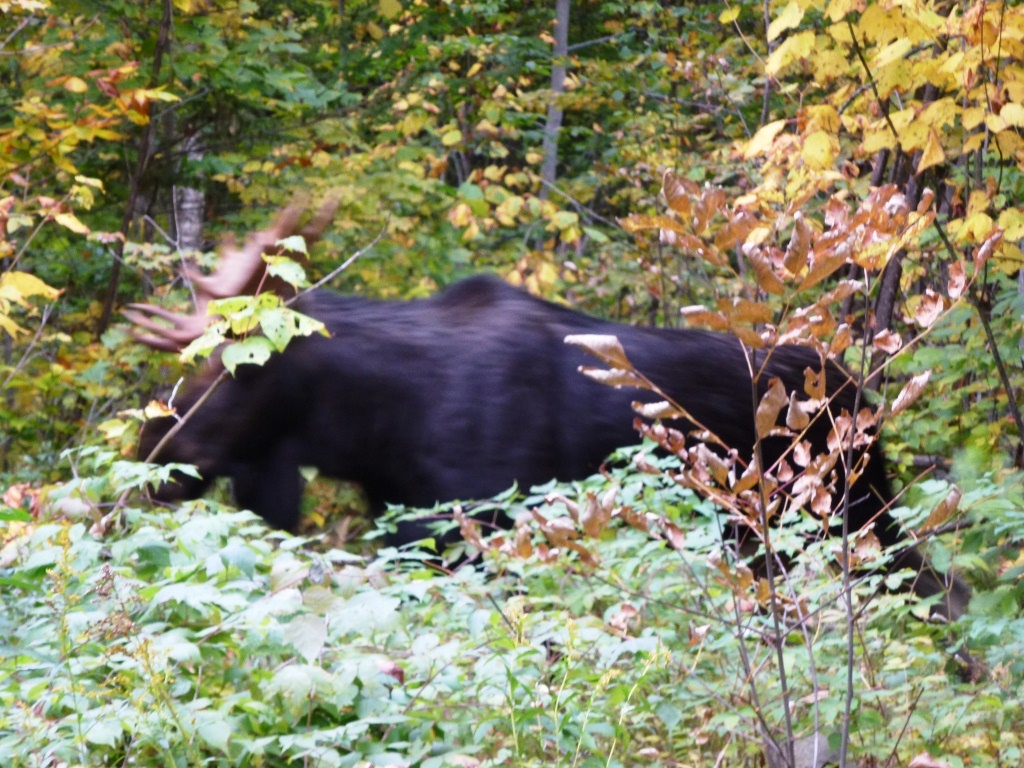 AND THEN ...as we were making our way down one of these logging roads I heard a trampling of branches and low croaking sounds. We froze and waited. A few minutes later a black form emerged from the woods (above right). It was a huge bull moose in rut. He crossed the road, saw us, and stared for a while (left), maybe wondering if we were enemies or potential mates. He must have been 30 feet from us. Peter whispered, "If he charges, run behind a tree" which is indeed the best advice. Eventually he walked away (right). 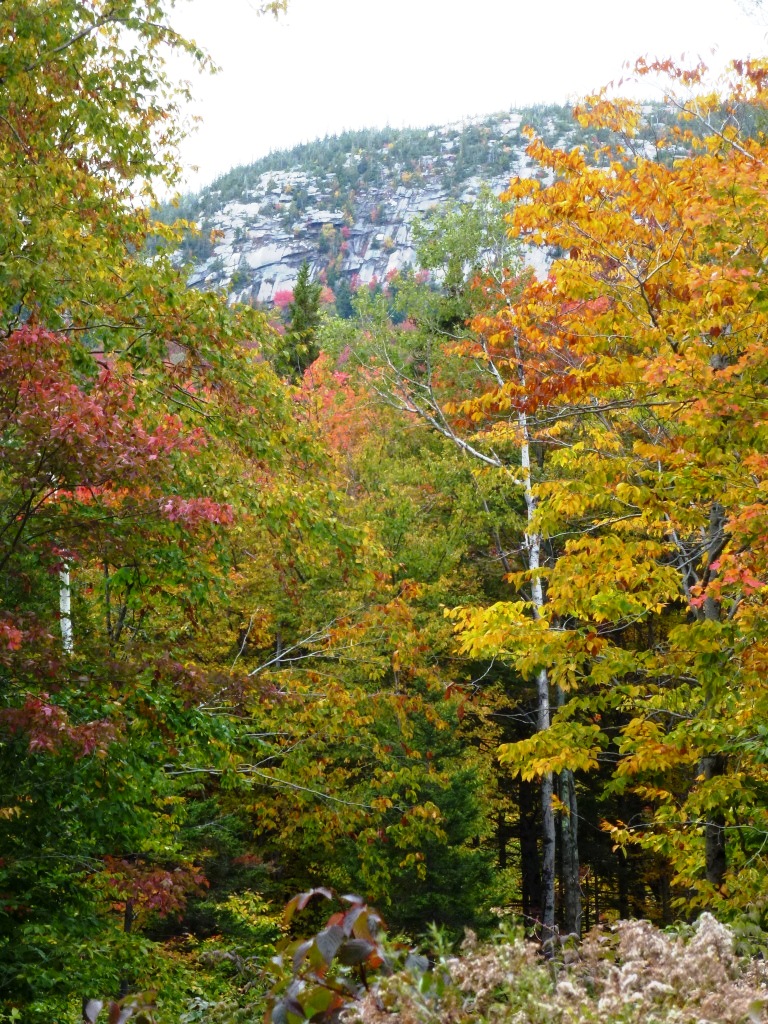 Well, that was major excitement for the day. We continued our bushwhack down and soon got back to the snowmobile trail. We still hadn't found the moose graveyard, so we continued on the trail for 30 minutes or so (left) but didn't see anything. We turned around, with great views of the West Mountain cliffs that we had just conquered (right). After the hike I looked up a snowmobile trail map and saw that the trail continued on for quite some distance. Next time I'll bring my mountain bike, and maybe I'll discover the moose graveyard!