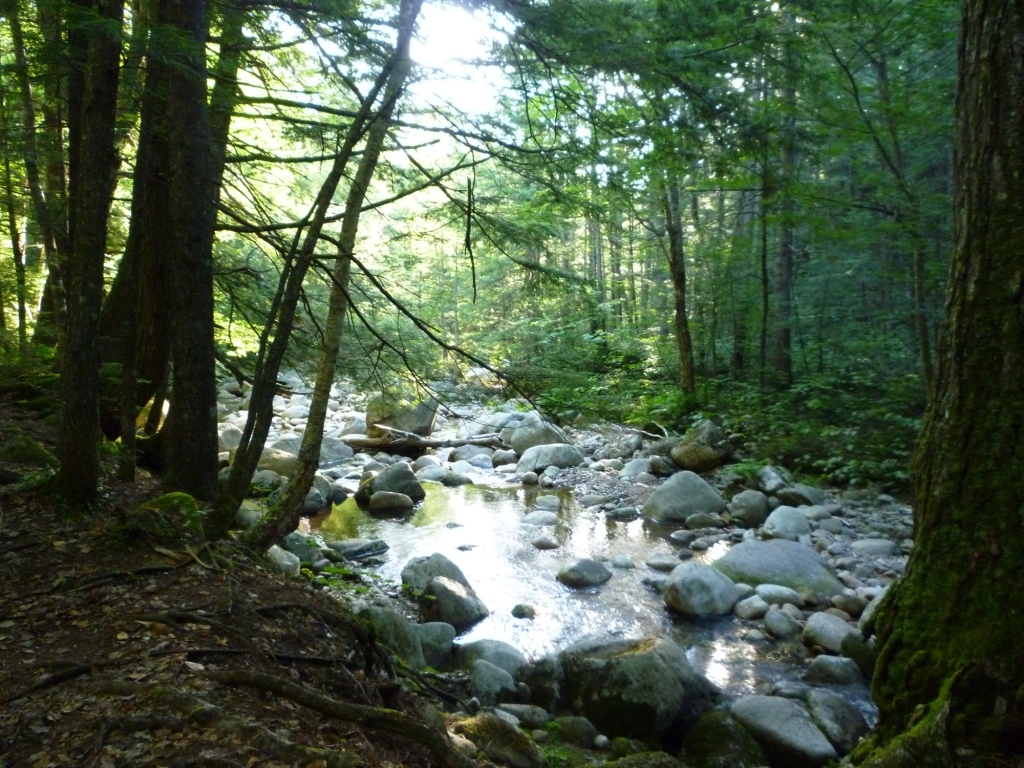 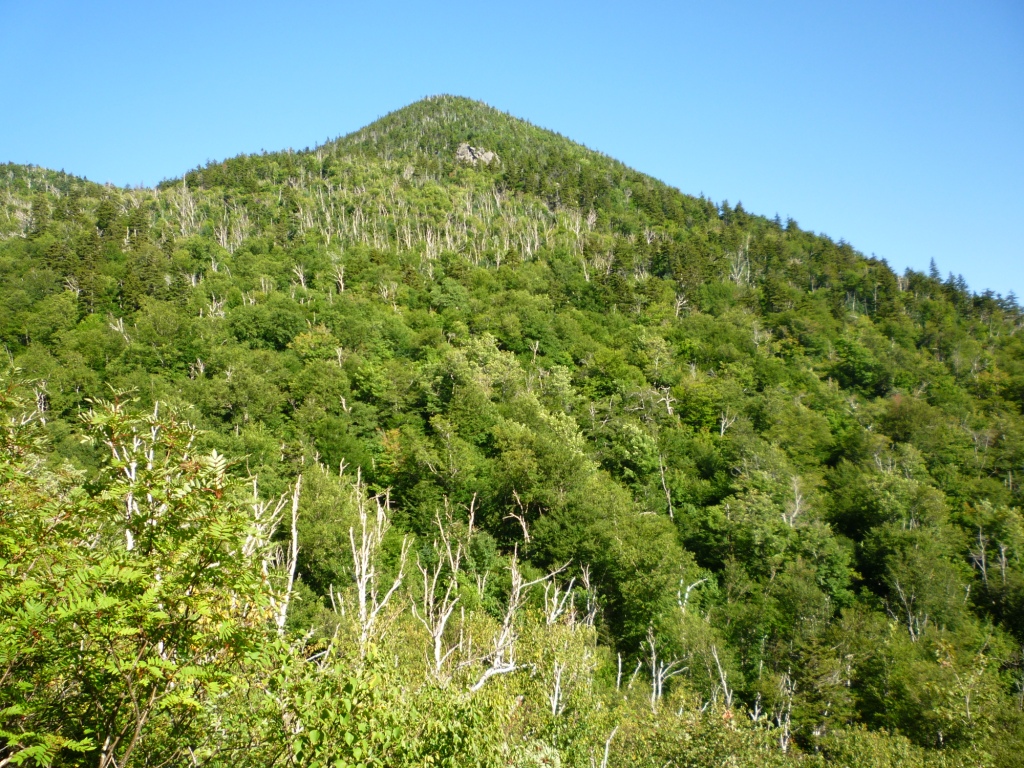 Alex and I did this two-peak trek from the north side, starting from the Olivarian Brook trailhead (1,200') off the Kancamangus Highway. We hiked in by the Olivarian Brook Trail, which goes along its namesake brook (left). The brook has broad flat banks covered with pine needles - perfect for camping. At 1.7 mi. we entered the Sandwich Wilderness and the trail predictably became rougher but still nothing difficult. At 1,500' we turned right on the Passaconaway Cutoff, which took us up to 2,550' to deliver us on the Square Ridge Trail. From there we kept on climbing through the open forest, with glimpses of towering Passaconaway across the valley to our right. A ledge above the trail at 2,900' gave us an open view of Passaconaway (right) as well as a beautiful view to the north (below left - ledgy Hedgehog Mtn. is in the foreground). 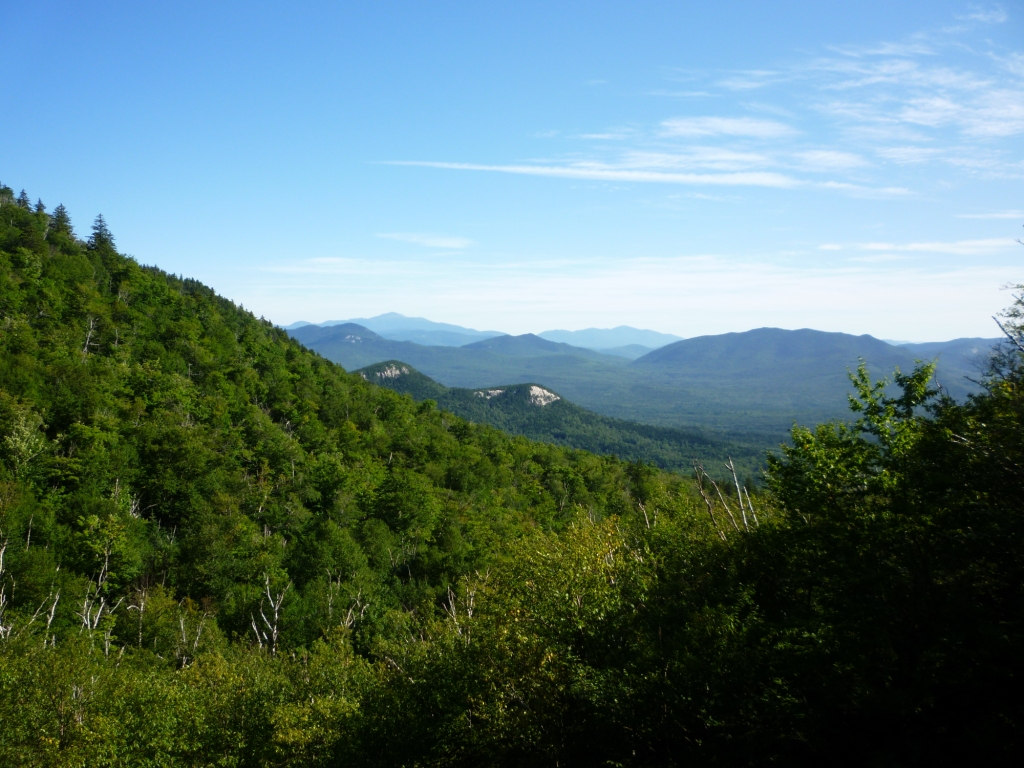 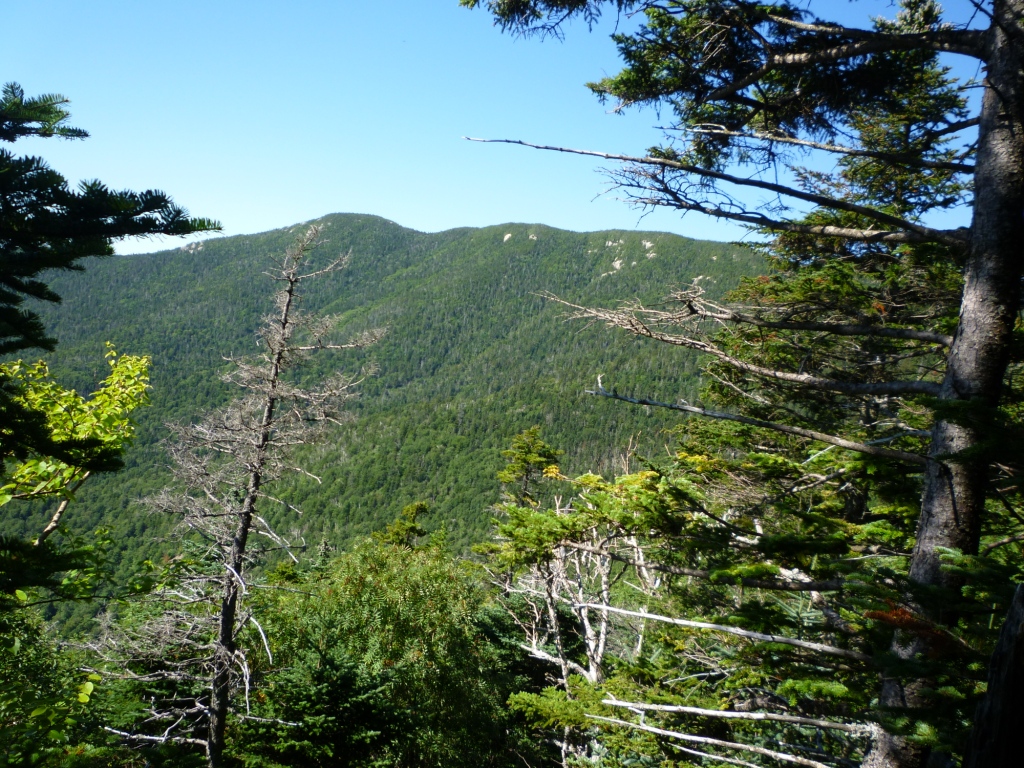 The Square Ledge Trail ended at 3,100' on the edge of the Sandwich Bowl. From there the Walden Trail offered to take us to the top of Passaconaway but we wanted to go to Whiteface first to get the furthest point of the hike out of the way. So after 0.1 mi. on the Walden Trail we took the East Loop for 0.2 mi., then the Dicey's Mill Trail for 0.1 mi., and on to the Rollins Trail which would take us to Whiteface. The Sandwich Range has an amazing density of trails, much like the north side of Mt. Madison, reflecting the trail-builiding enthusiasm of the summer hotel crowd at Wonalancet a century ago. Bless their souls. Somewhere along this maze of trails we got our first view of Whiteface across Sandwich Bowl (right). 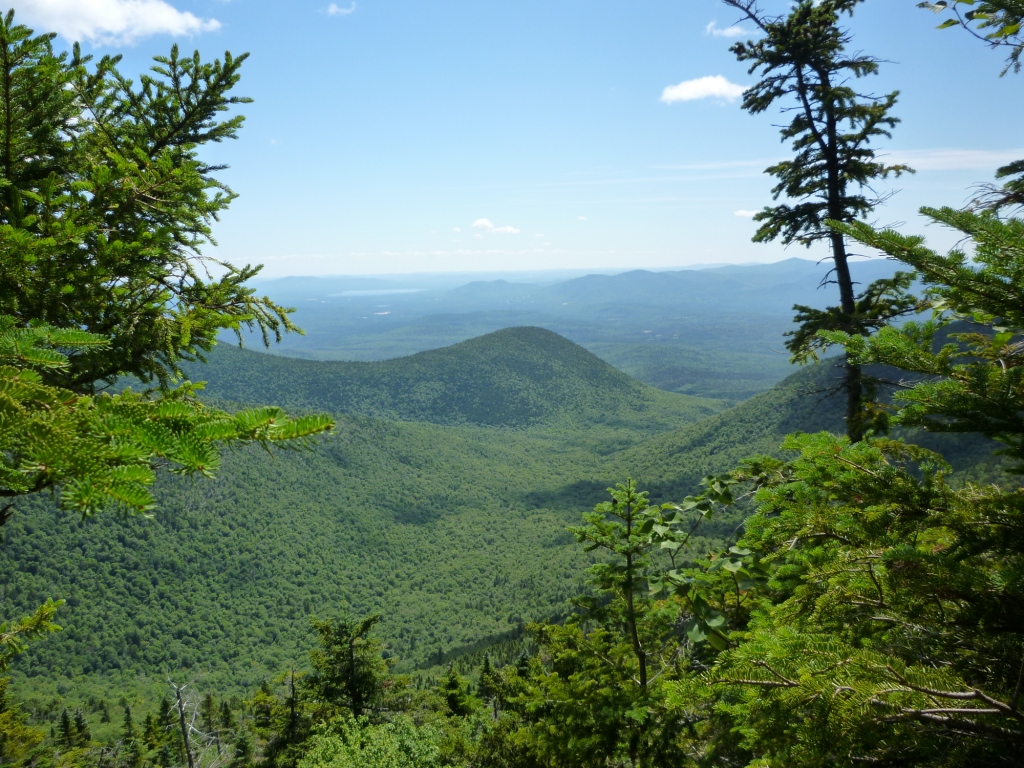 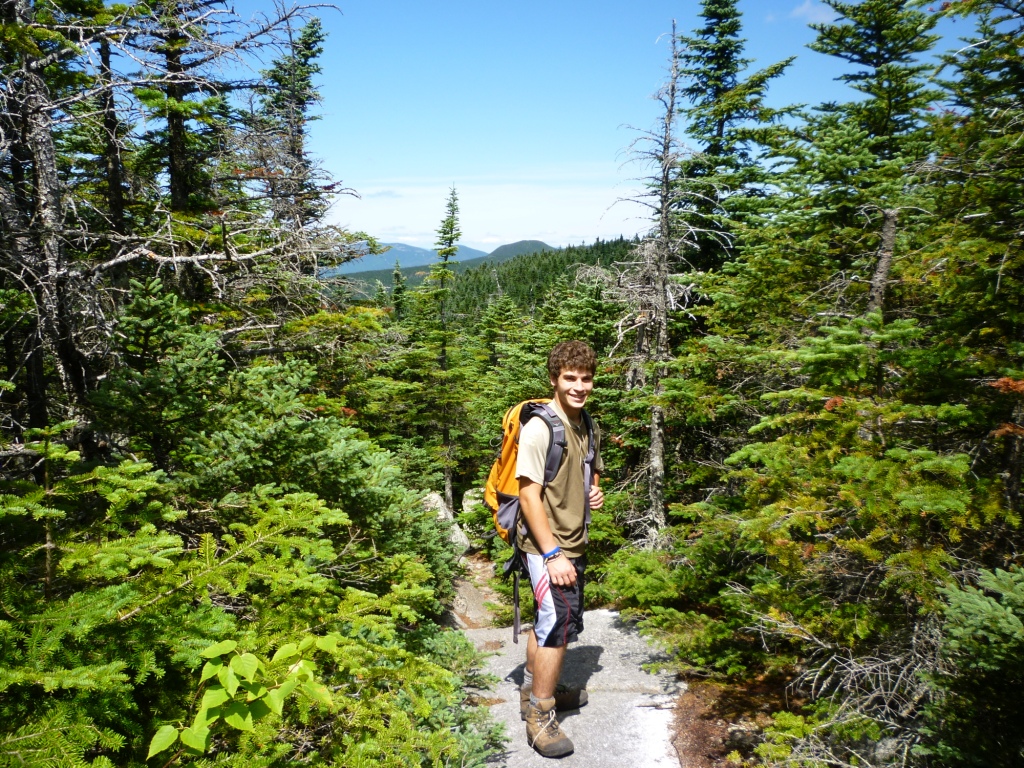 The Rollins Trail hugs the west side of the Bowl on a long circular ridge eventually reaching Whiteface. It's an easy and beautiful trail, with magnificent views of the Bowl as the trail clings to its edge (left). Whiteface is a relatively low mountain (4,012') and at the southern edge of the Whites, so the forest did not have the dense-packed character that you usually see when you get close to treeline but instead remained nice and open, with plenty of camping spots that obviously had not gone unnoticed (one still had smoke from the fire). As we approached the top of Whiteface we felt more and more on a knife edge, with ledgy terrain that was a pleasure to hike on (right - Passaconaway is in the background). 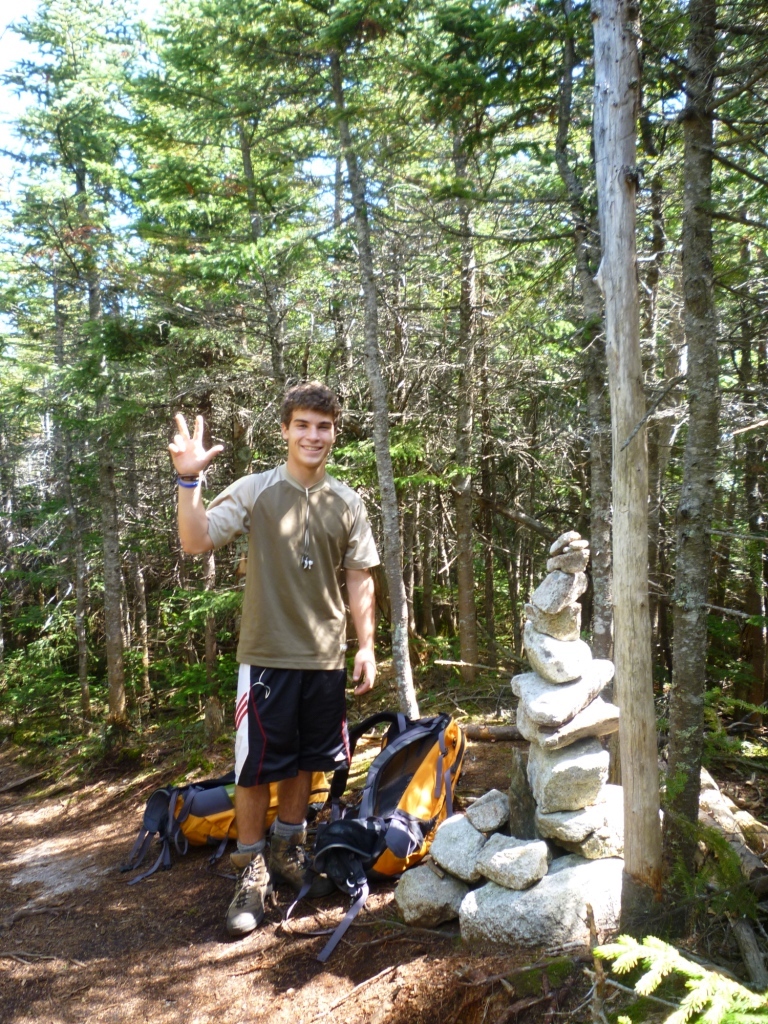 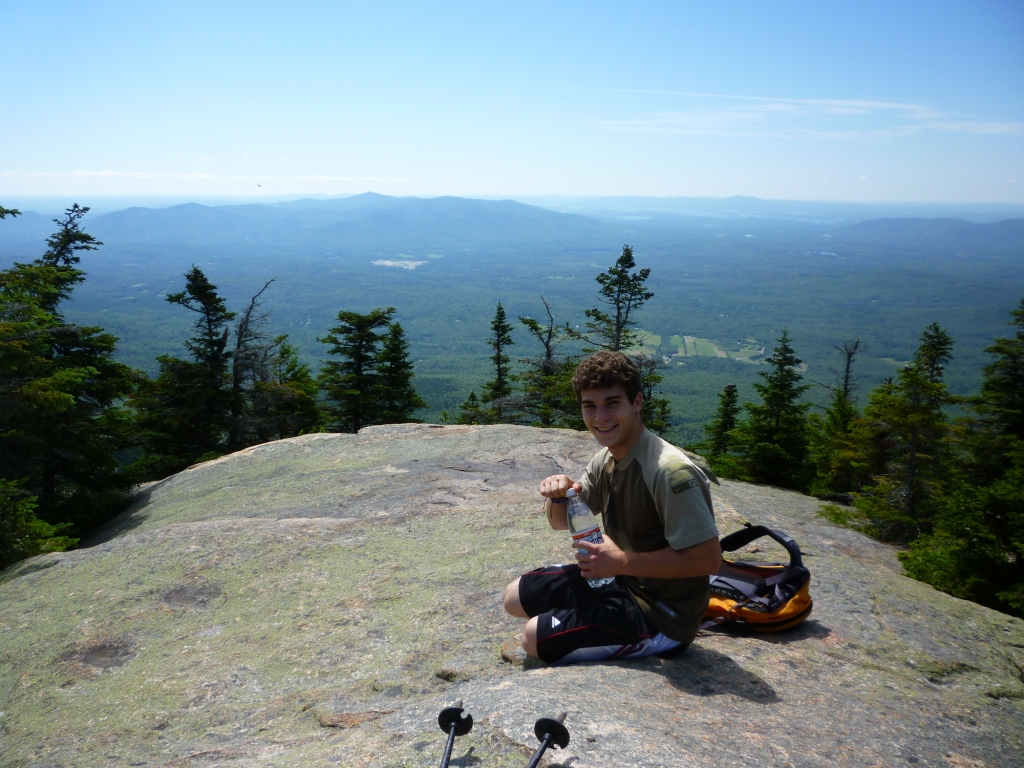 The peak of Whiteface is just a cairn in the woods (left) but that was Alex's 45th 4,000 footer - just three to go! We pushed on to the southern ledges of Whiteface, which provided us with a great and unusual 180o view to the south over the Lakes Region of New Hampshire (right and below left). We could see Winnepesaukee and Squam Lakes with the Belknap Range beyond Winnepesaukee featuring the slopes of Gunstock Ski Resort. The kids and I loved to go to Gunstock when they were little - just a 90-minute drive from Medford and enough glades and park to be fun. 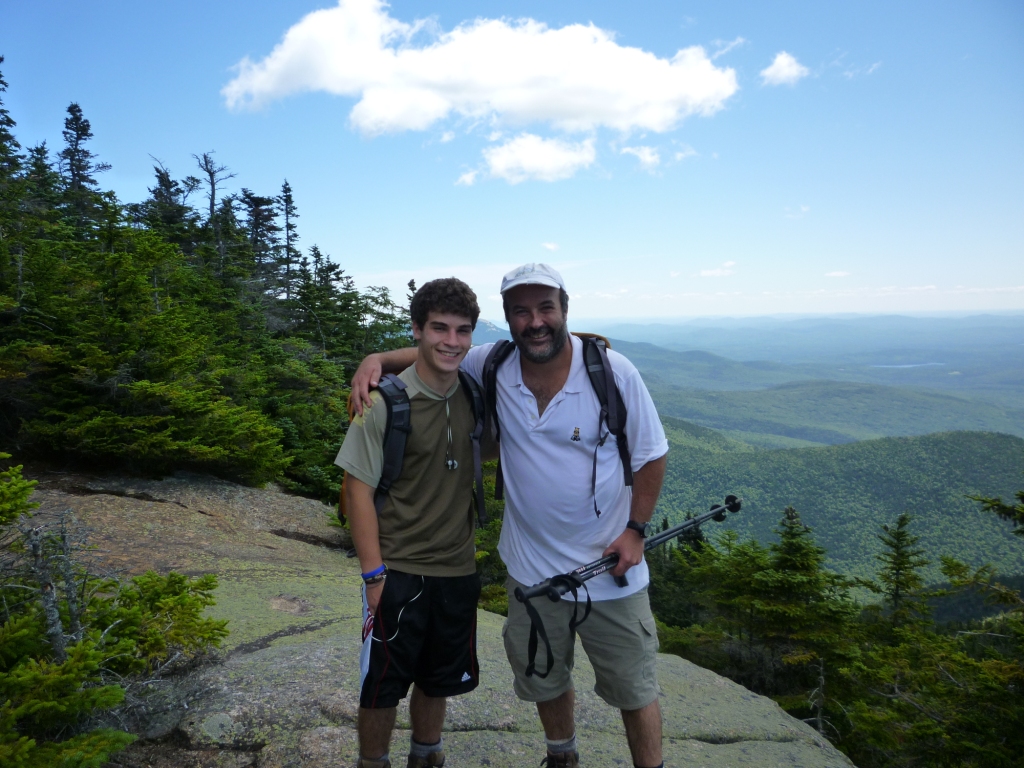 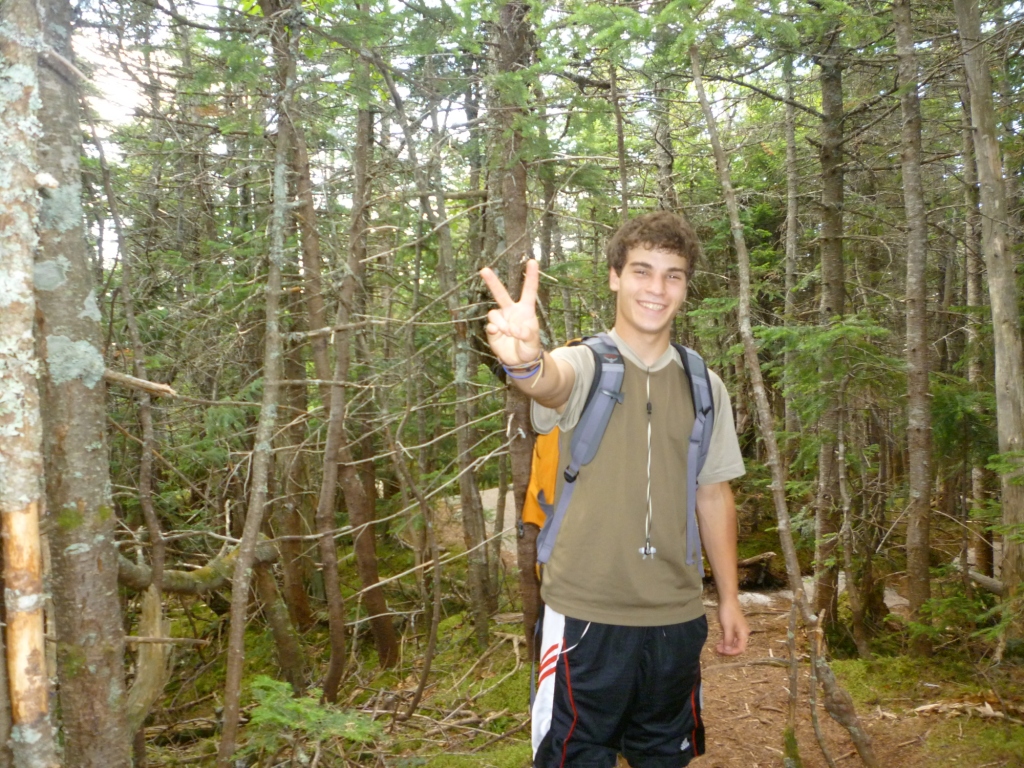 After soaking in the views for a while we started on our way back, to the Rollins trail and on for a date with Passaconaway. The advantage of an in-and-out route (instead of a loop) when doing a long hike for the first time is that you know what the return will be like - no surprises. Also, hiking in the return direction always offers a different perspective. In this manner we got back on the Dicey's Mill Trail and up Passaconaway. This was an easy climb from 3,300' to the top (4,050') except for the last 200' which were a steep mess of rocks and roots. As we got to the top of Passaconaway we were greeted by a ledge with a great view to the northwest. The top of Passoconaway is a small plateau and the summit itself is a viewless wooded spot, without even a cairn so we had to guess (right). Only two to go for Alex, there's no stopping him now! 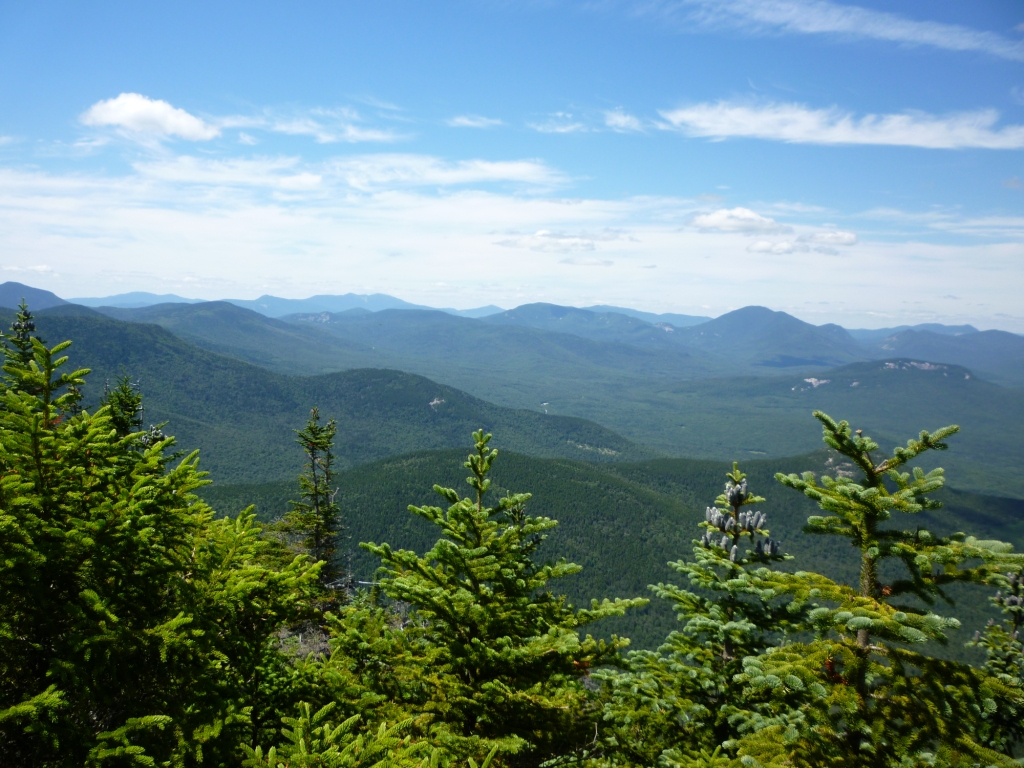 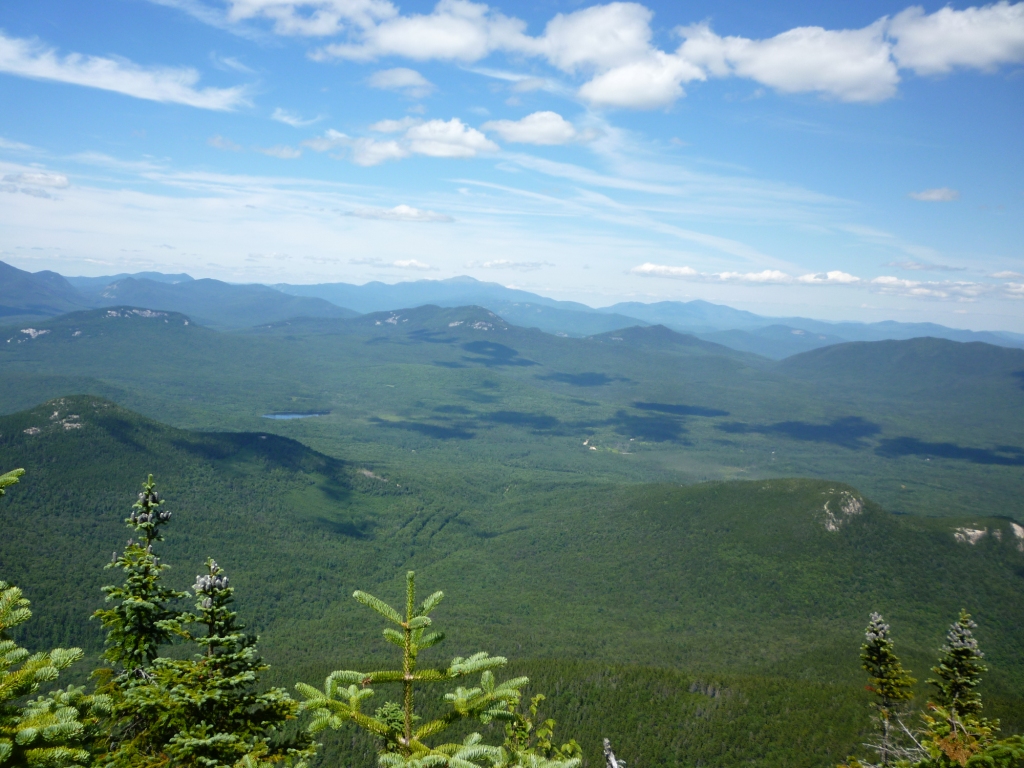 To the east of the summit there is another great ledge with views to the northeast. But I'm not showing you pictures of these ledges because the best view (and encompassing the above) is from an opening 200' below the summit, indicated by a sign east of the summit stating "View". We hiked down and indeed this is a phenomenal 180o panorama to the north, complementing the one we had from Whiteface to the south. At left is the view northwest, at right is the view straight north, and below left is the view northeast, completing the panorama. I had heard that Passaconaway was a disappointing climb for views, but considering its low altitude it really is pretty good. 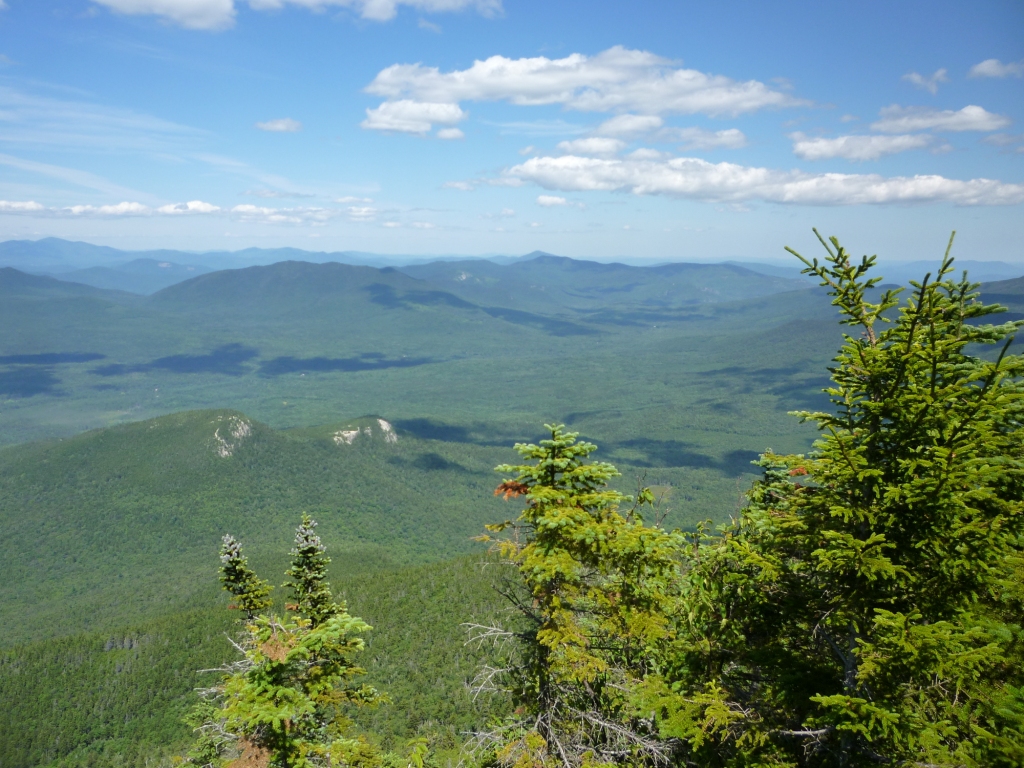 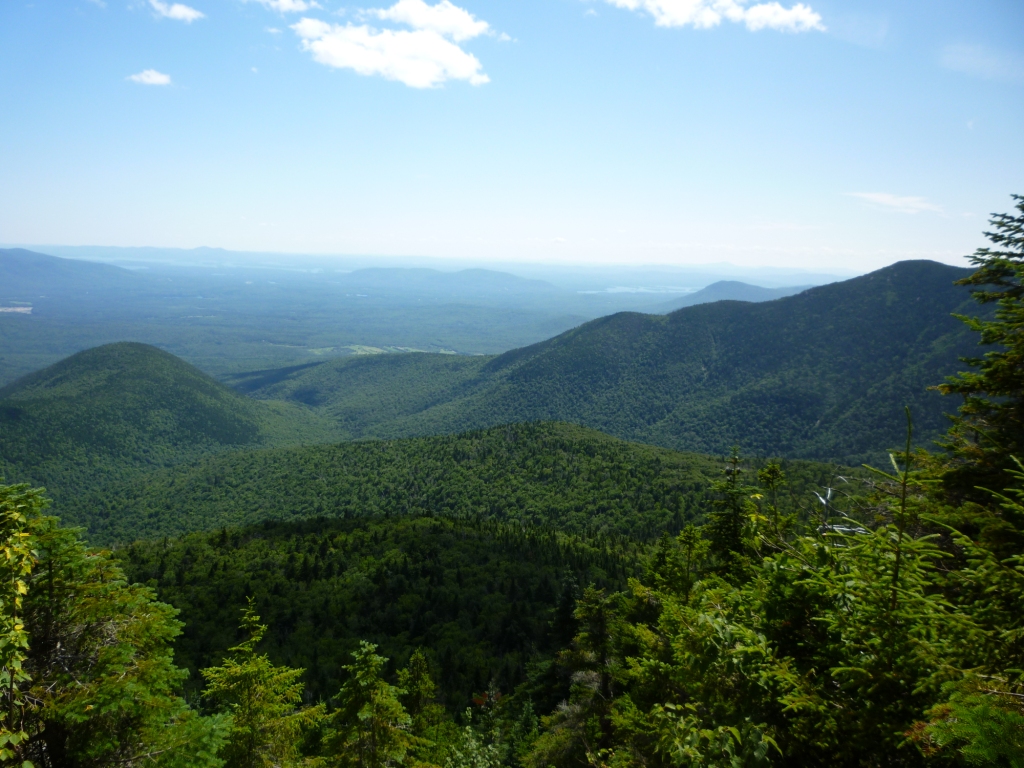 After we had enough of the views we headed back to the top of Passaconaway - our final climb of a long day - and proceeded down on the Walden Trail. At 3,850' we found another opening in the trees with a final great view to the south of Sandwich Bowl. From there it was back the way we came, with the heat and tired legs taking their toll. We got back to Olivarian Brook Trail and found a nice swimming hole in the brook to cool off. When planning a hike on a hot day it's always a good idea to have a swimming hole identified for the return!