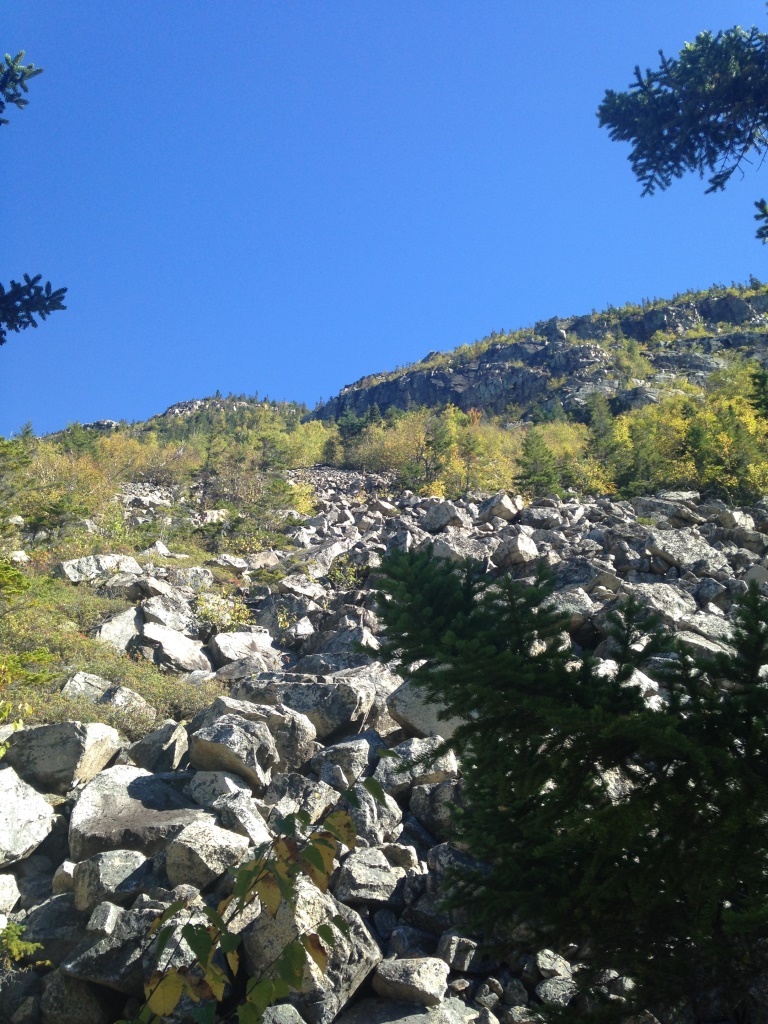 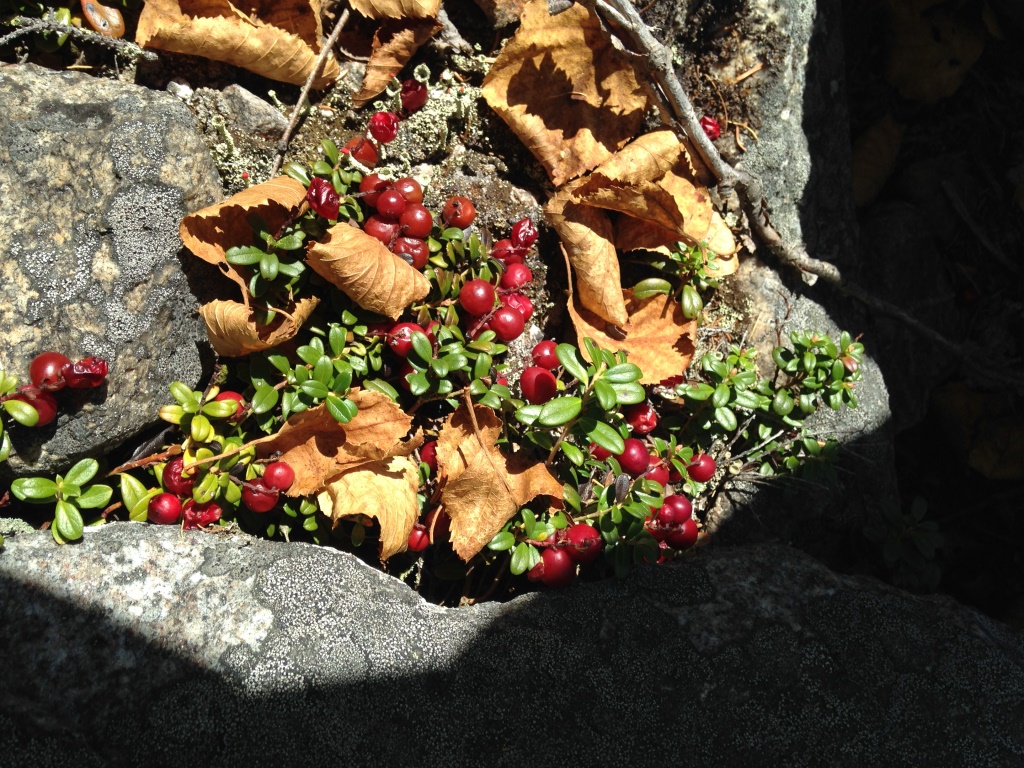 My plan was to climb both sides of the Zealand Valley - Whitewall and then Zeacliff. I was counting on foliage in the valley to be at its peak but it was all still green - likely because of the record-breaking heat of these past two weeks. From Zealand Road I headed up the Zealand and Ethan Pond Trails. After about 30 minutes on the Ethan Pond Trail and at 2,450 feet I reached the bottom of the Whitewall slide that would take me to the top of trailless Whitewall mountain at 3,450 feet. I had done it before 3 years ago but hadn't written it up (tsk!) I somehow remembered to start the climb at the location of the Zeacliff Trail sign (that turned out to be wrong). The climb up the talus was steep (left) and I had to be careful about loose rock but it wasn't too bad, there were small birches growing out of the talus on which I could hang on. There were lots of ripe cranberries (right). 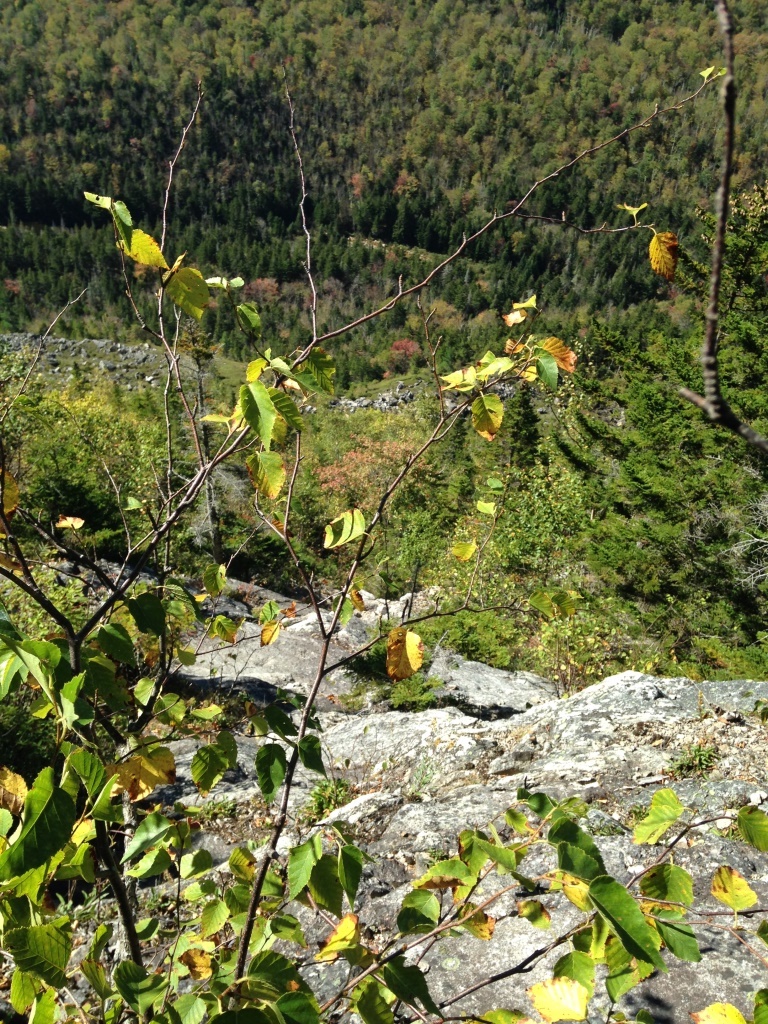 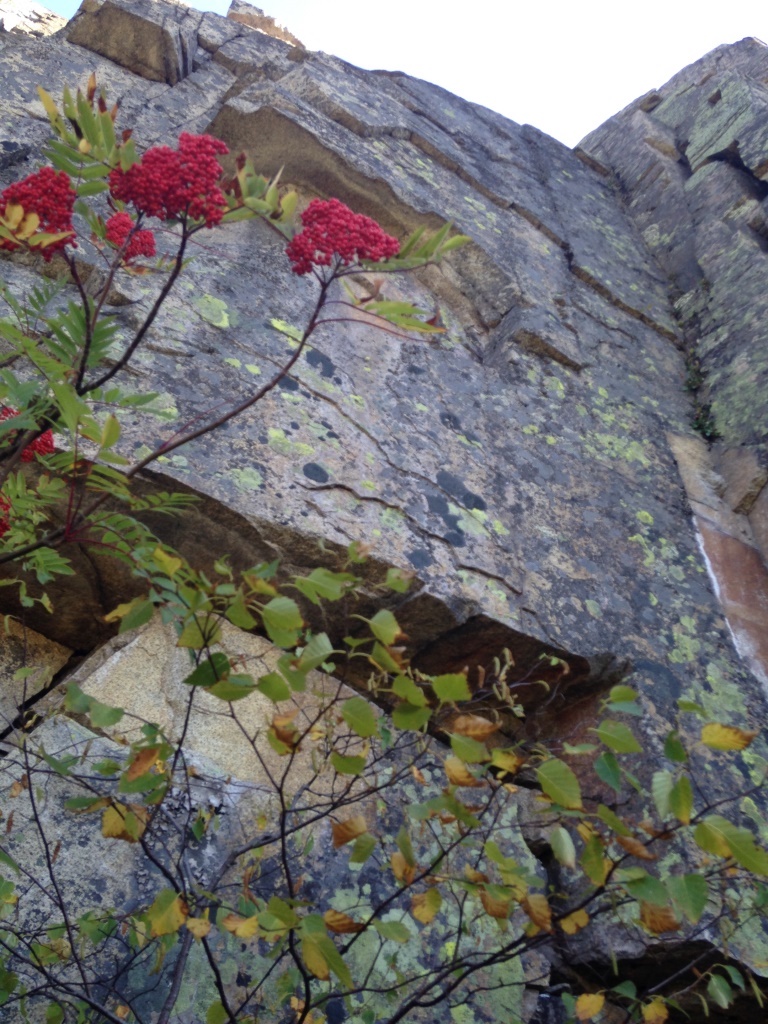 I got up in this manner to 2,950 feet (left) but then there was a cliff ahead of me (right) and I couldn't figure out how to go around it - neither left nor right was manageable. I was very annoyed, having successfully done this bushwhack three years ago, but there was nowhere to go but down. 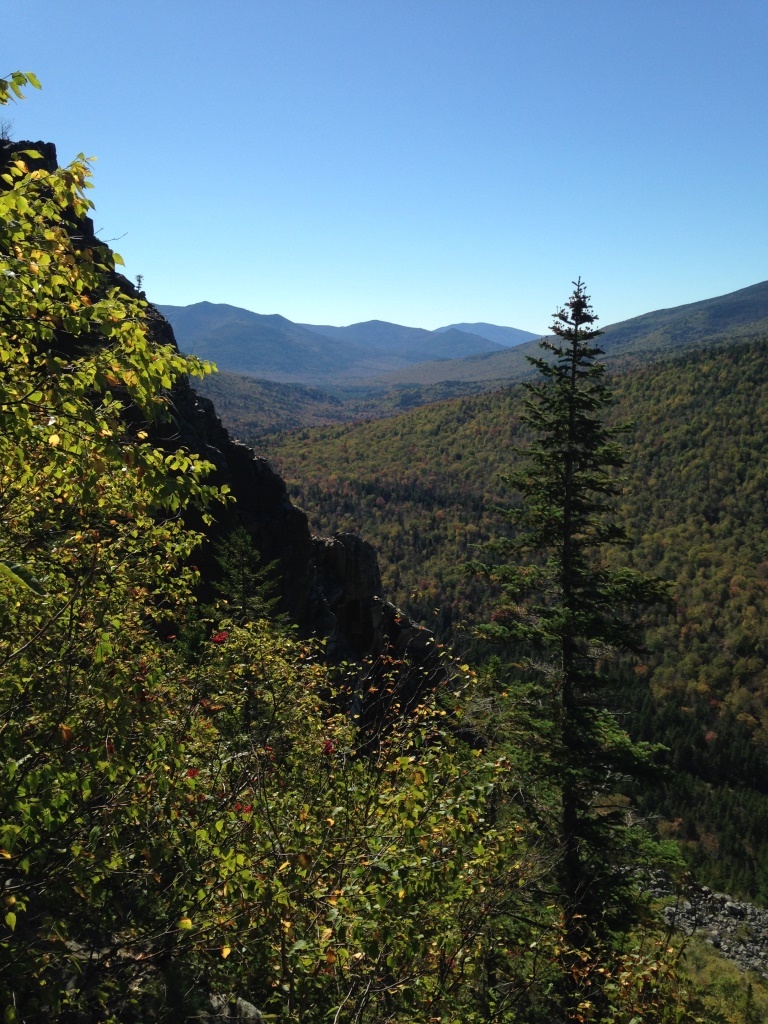 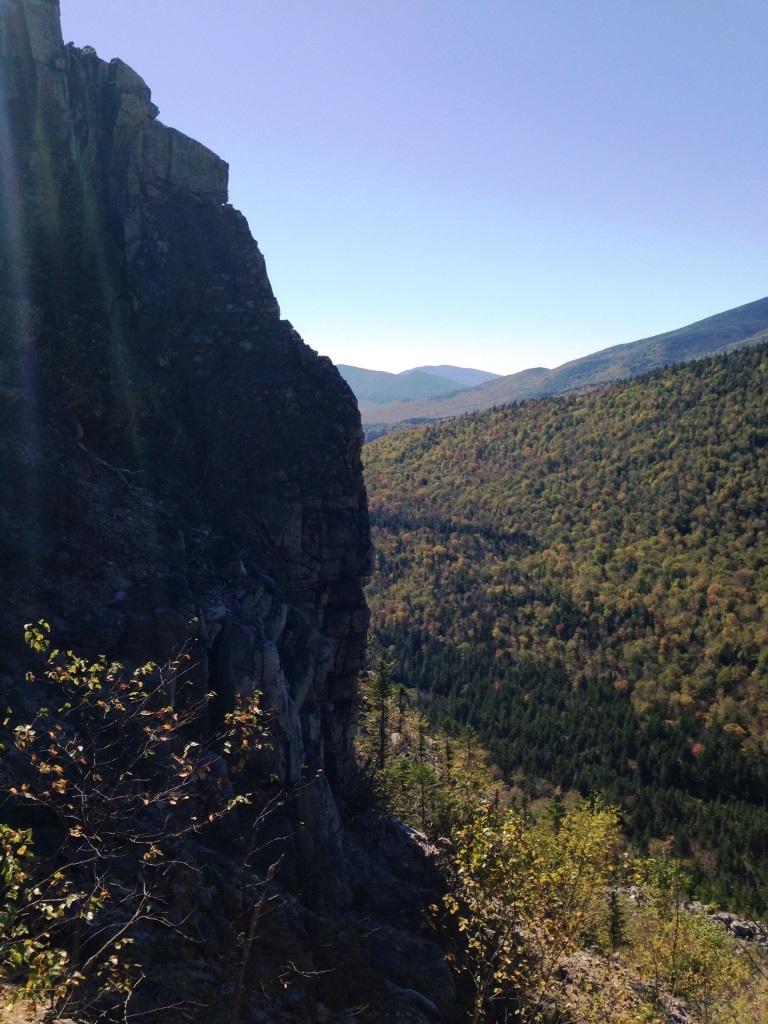 Before going down I took pictures of the Pemi valley with the cliffs in the foreground (left and right). 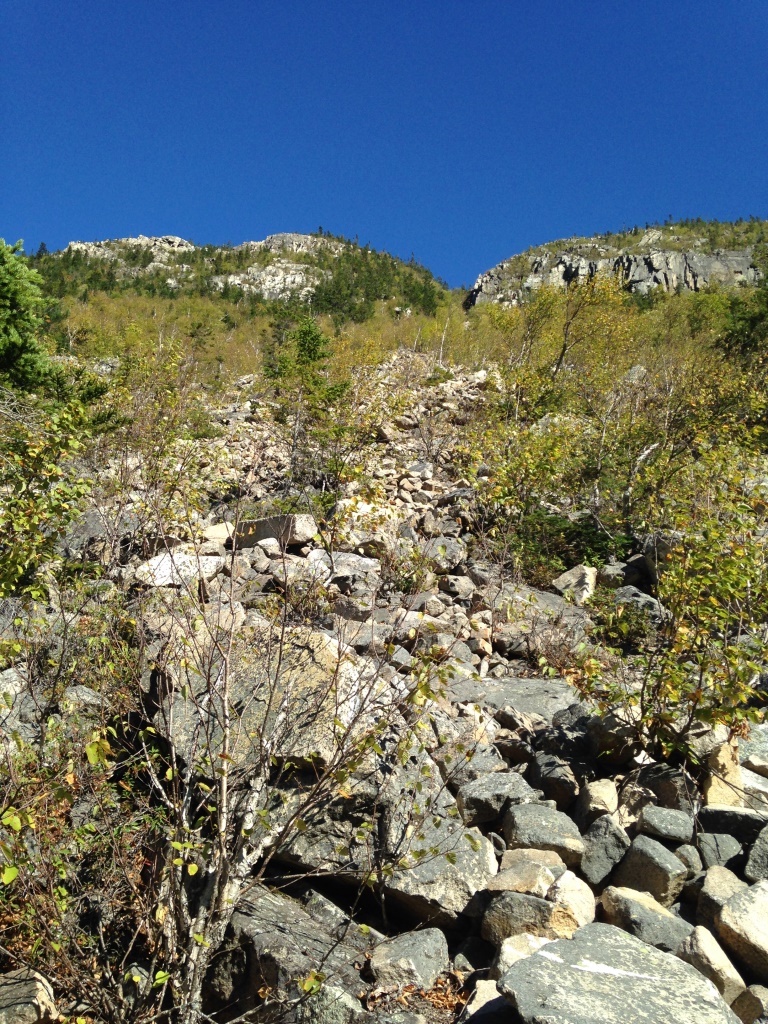 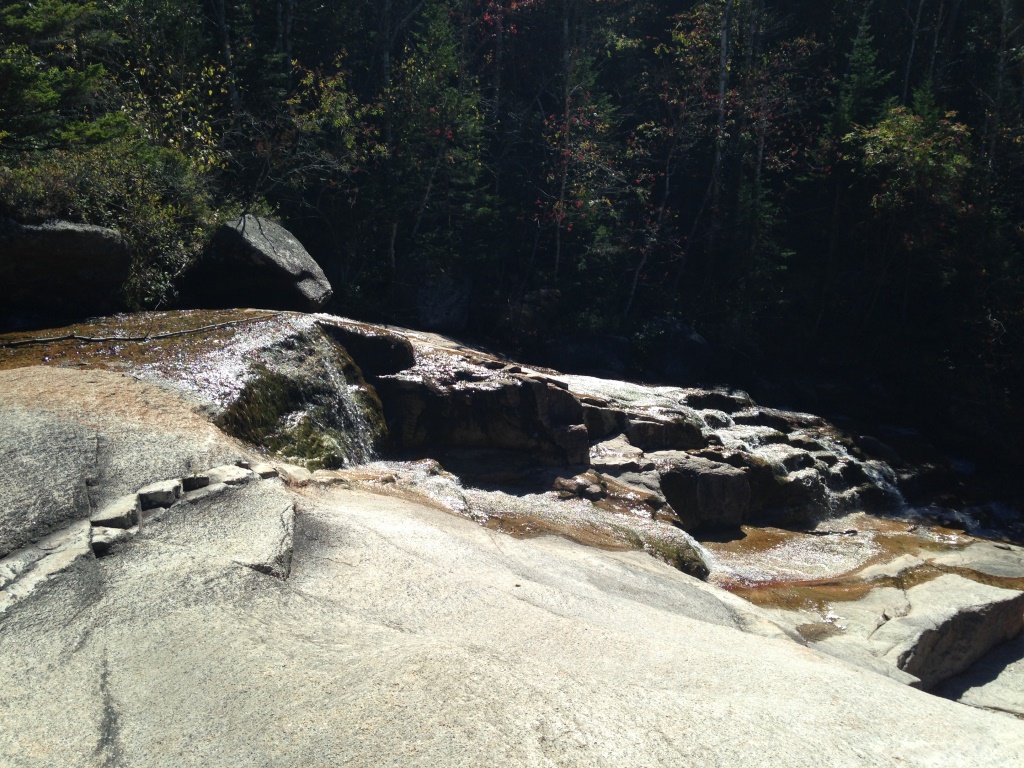 Back down on Ethan Pond Trail I figured what I did wrong - I should have started climbing 100 yards to the north, almost as soon as the slide opened into view and with a straight shot up the gap in the Whitewall cliff (left). Oh well, next time. I pushed on to Thoreau Falls since I was close - the Falls were as small as I've ever seen them (right), it has been very dry this past month, but it was a nice spot to hang out for a while. 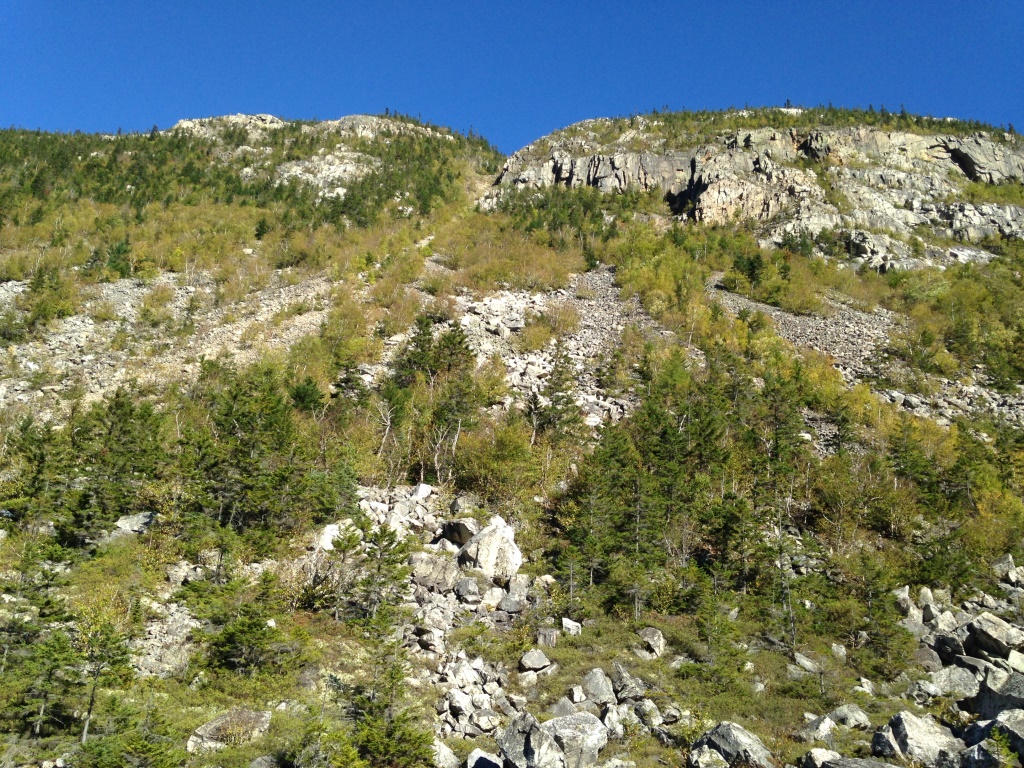 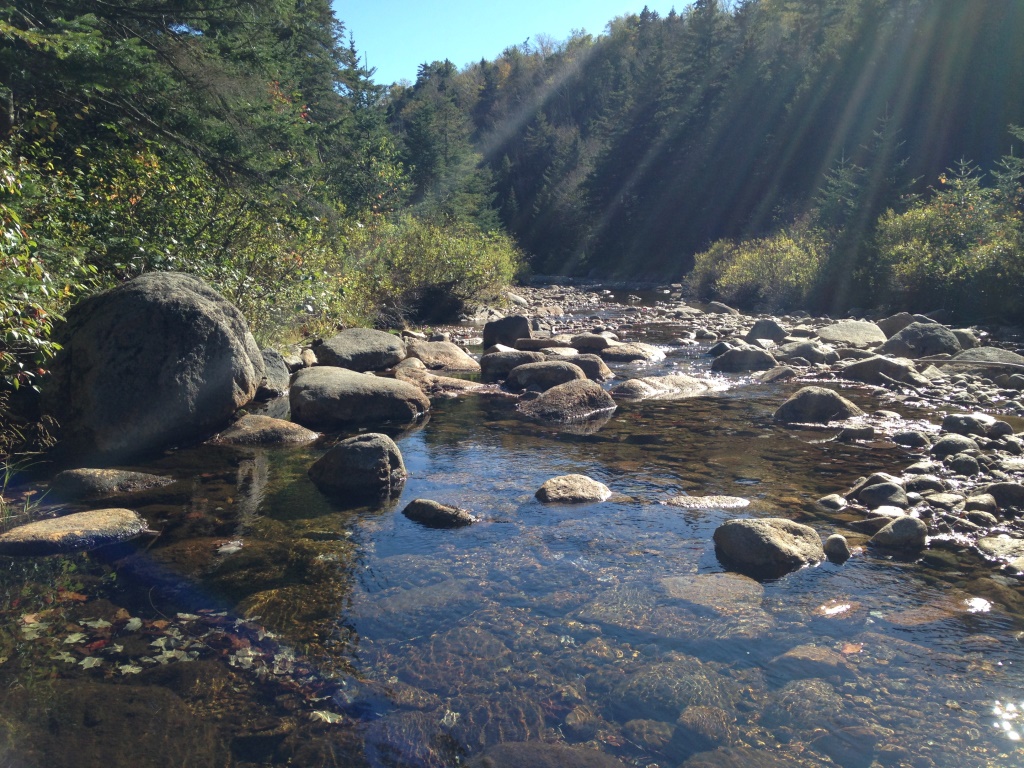 Coming back from Thoreau Falls I took the Zeacliff Trail, and before dropping down I had a broader view of Whitewall (left ) that clearly shows how I went wrong - to the left is a straight climb up the talus passing through the gap in the cliiff, but to the right is the cliff.. But now it was on to Zeacliff. The Zeacliff Trail drops to 2,200 feet to cross Whitewall Brook (right). Just before crossing the brook I noticed a campsite on the left with some trail continuing along the brook, I followed it for a while but it eventually petered out. 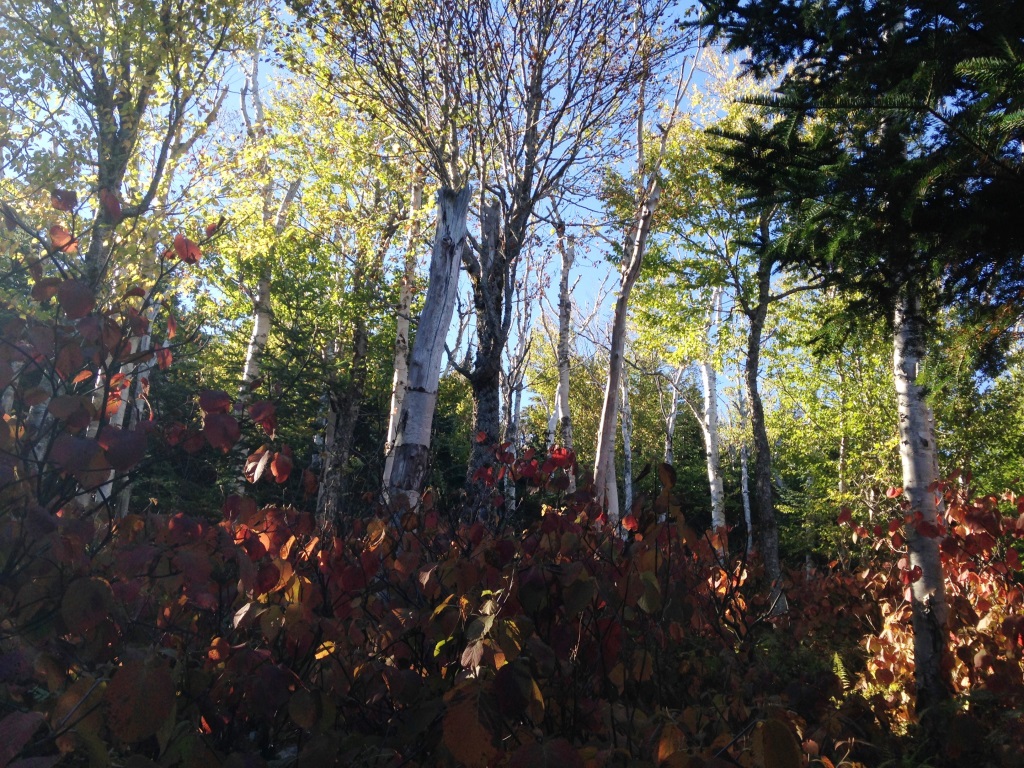 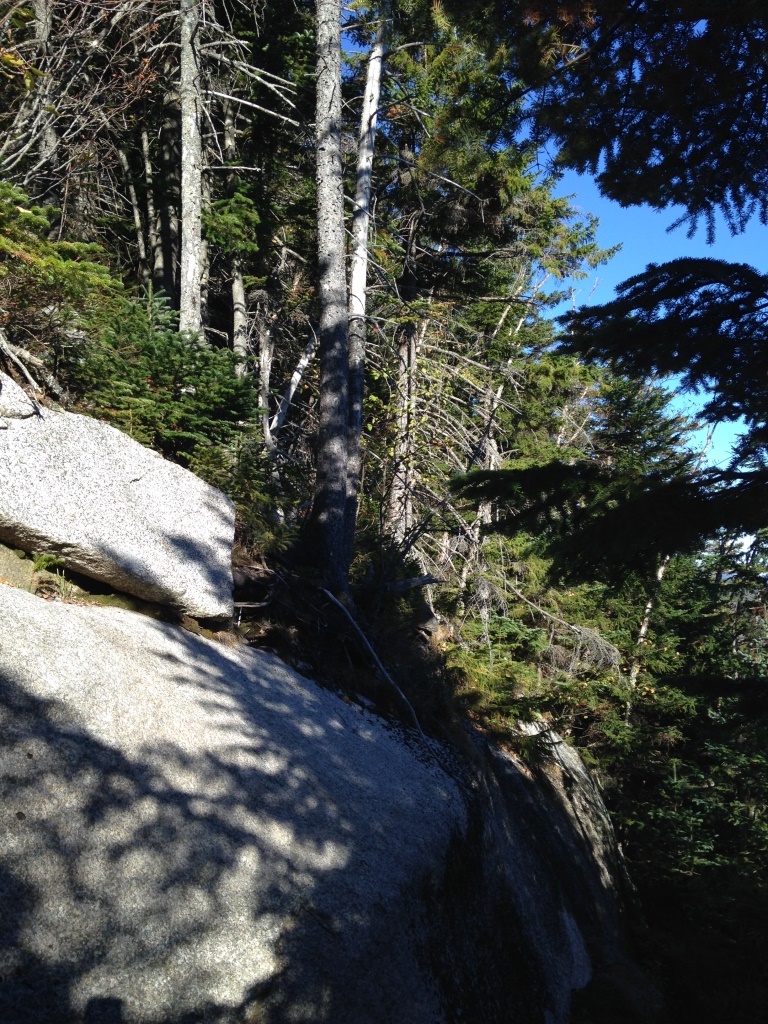 Back on Zeacliff Trail I started the steeep climb to Zeacliff (3,800 feet). The first part is very steep and not particularly interesting, but at 3,000 feet the grade moderates as the trail passes through a forest of dead white birches (left). That's a really pleasant section. After that the trail becomes a scramble over ledges as it climbs the cliff below Zeacliff (right). That part is fun, not particularly difficult but a lot of hands and feet, and an admiration for the trailmakers who found a path up the cliff. 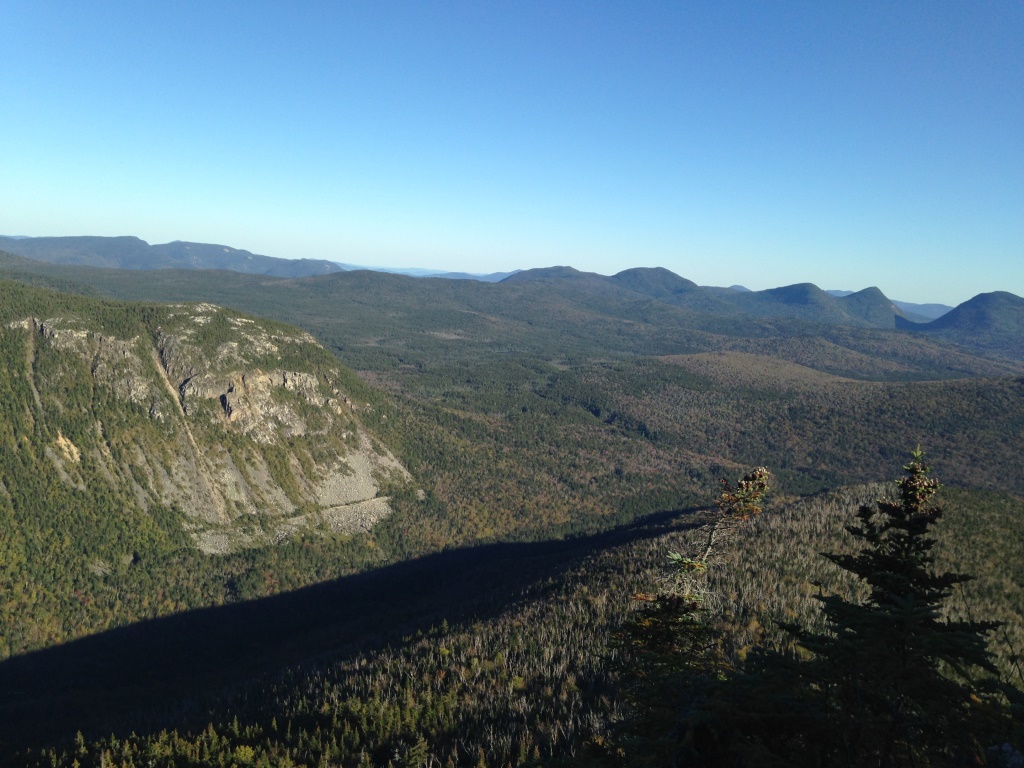 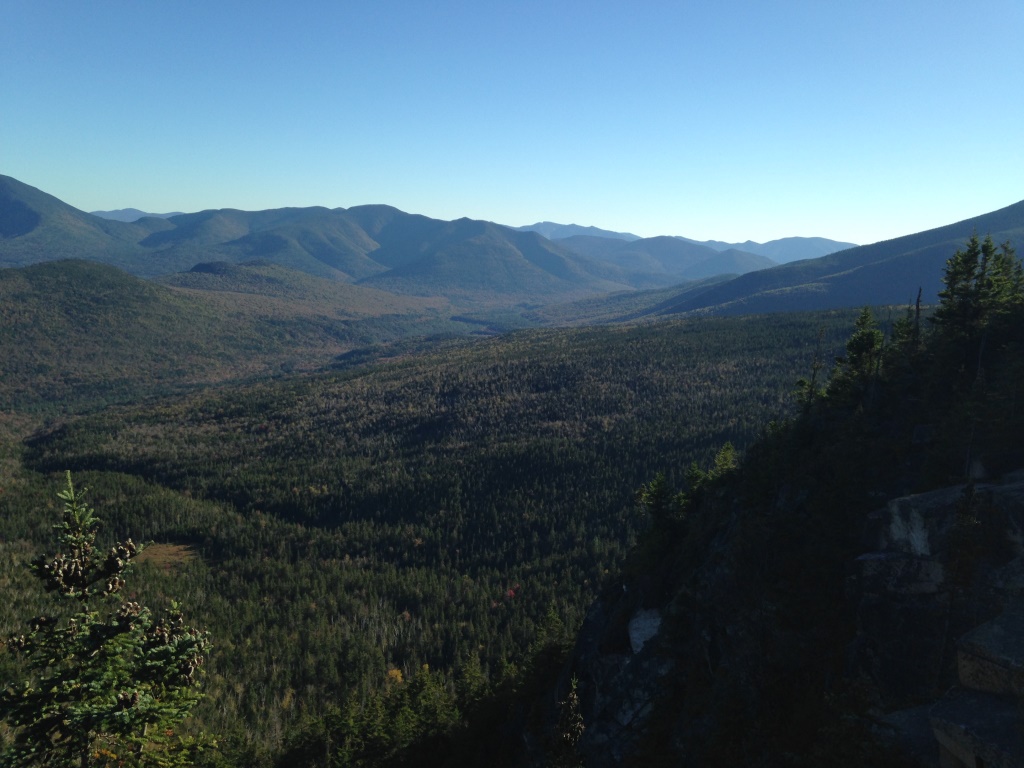 Finally I got to the top of the ridge on the Twinway and headed to Zeacliff for great views in the late afternoon sun (left and right). The long-distance view of Whitewall again pointed to the way to goâ€¦next time! After that it was down the Twinway past Zealand Hut and back to the Zealand Trail with an exit just before dark. Days are getting shorter!