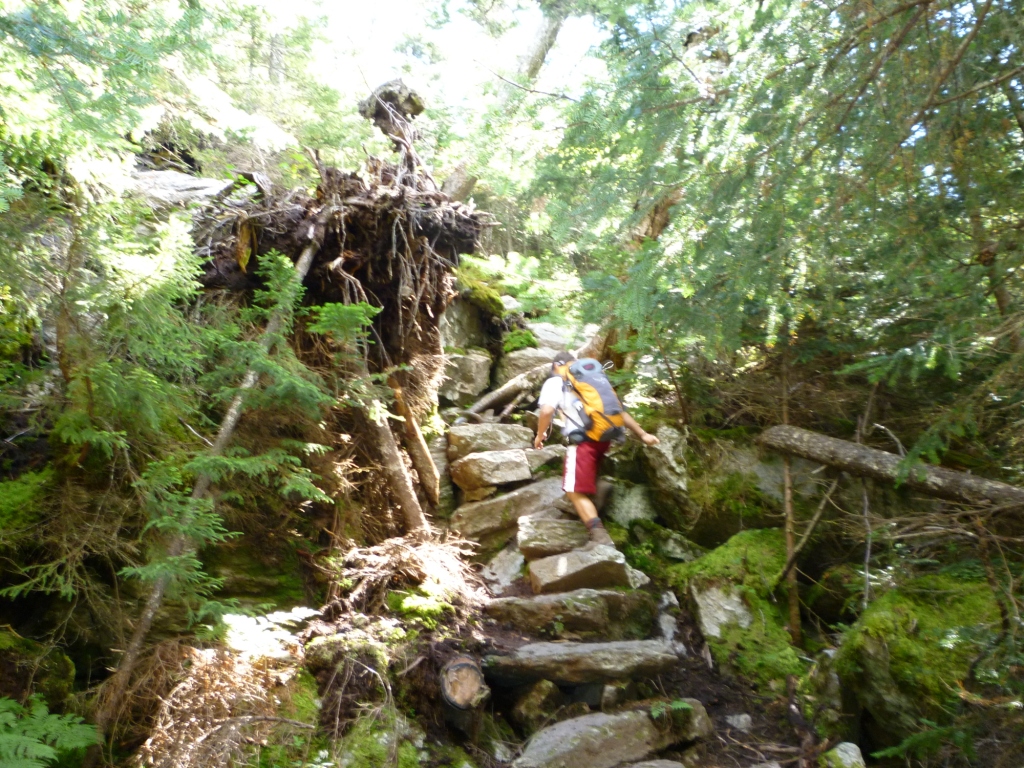 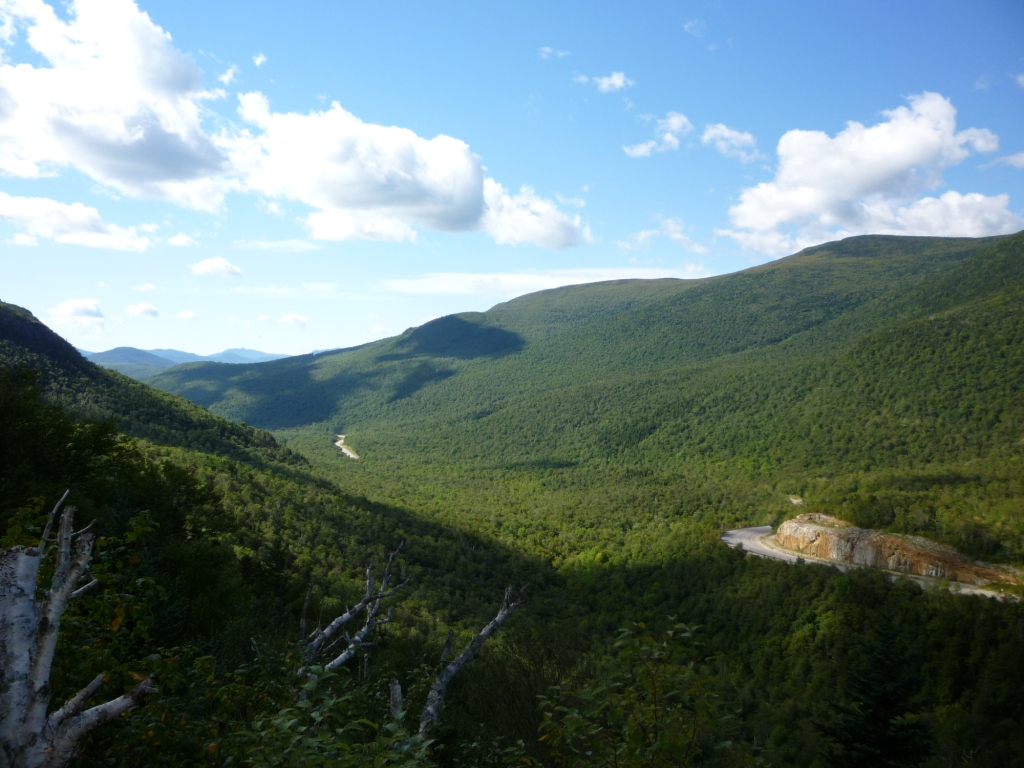 The Wildcats are a string of five peaks (creatively christened Wildcat A-E) stretched along a range on the east side of Mt. Washington Valley. The Wildcat ski resort culminates at the col between Wildcat D and E. The main motivation for this hike was to add to the string of Alex's 4'000 footers, but it turned out to be much nicer than I had envisioned. We started from the Glen Ellis Falls trailhead on the Wildcat Ridge Trail, which gets really steep right away (left) but offers nice valley views from a number of ledges on the climb up. At right is a nice view of Mt. Washignton Valley from not much above the valley floor. 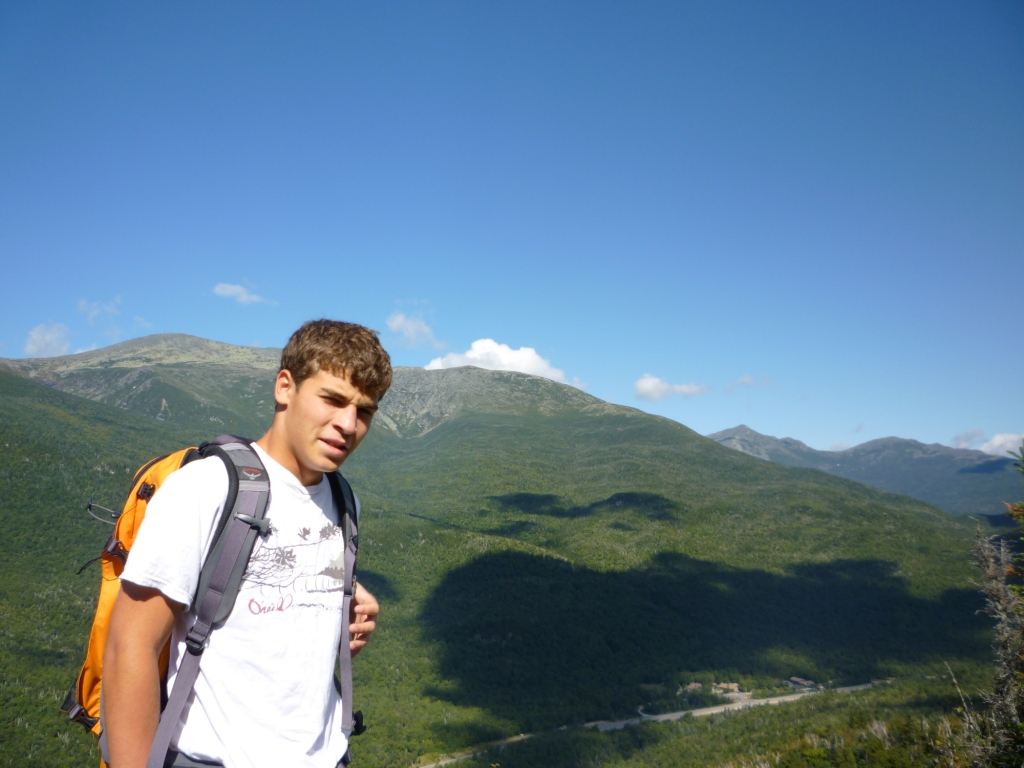 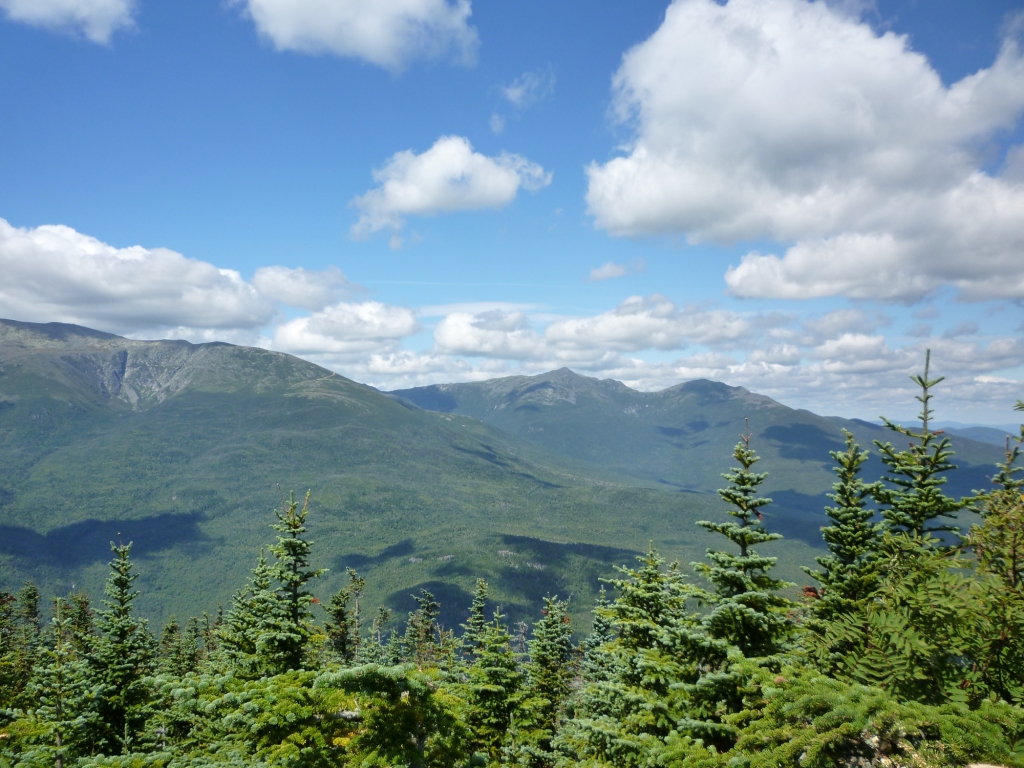 The Wildcat Ridge trail is really relentlessly steep, but it's not overly difficult (just a few scrambling spots) and you're rewarded with a lot of ledgy views of Mt. Washington (left) and Mt. Adams to the north (right). It's part of the AT and we met a few thru-hikers on their way up from Georgia. We also met a trio of fun guys who said they were headed for Route 2 that day - six 4,000 footers from the Wildcats to Mt. Moriah along the Carter range. I said, "No way" but they were in good spirits and had headlamps as well as an impressive array of electronic gizmos including GPS's and heart rate monitors. 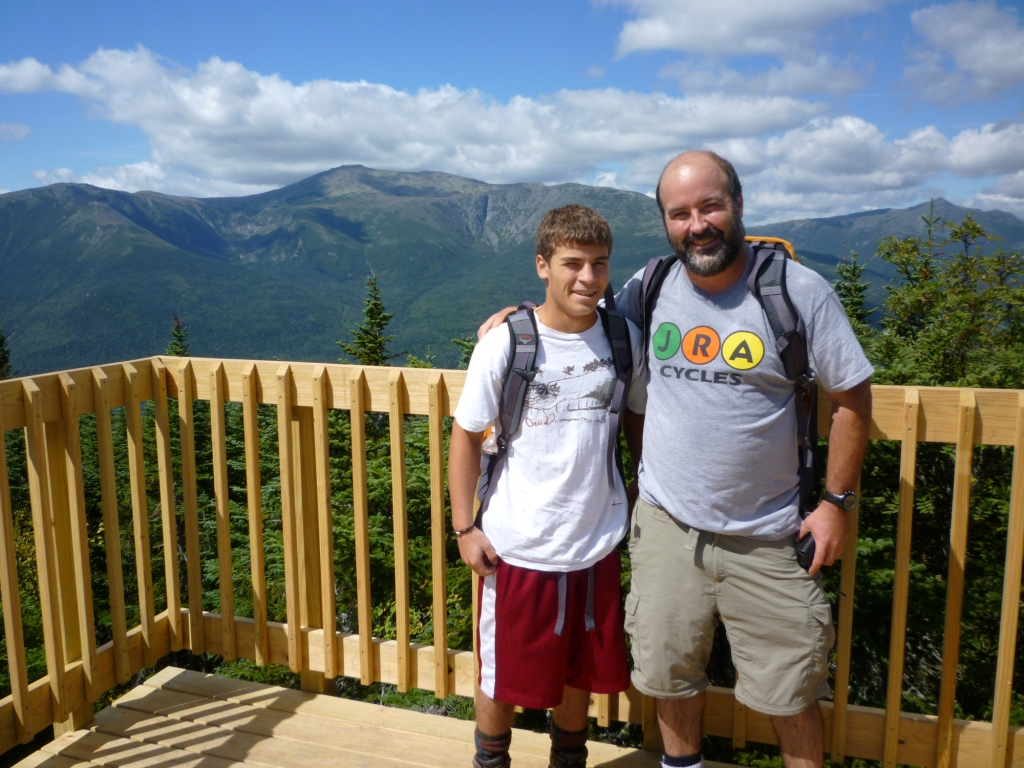 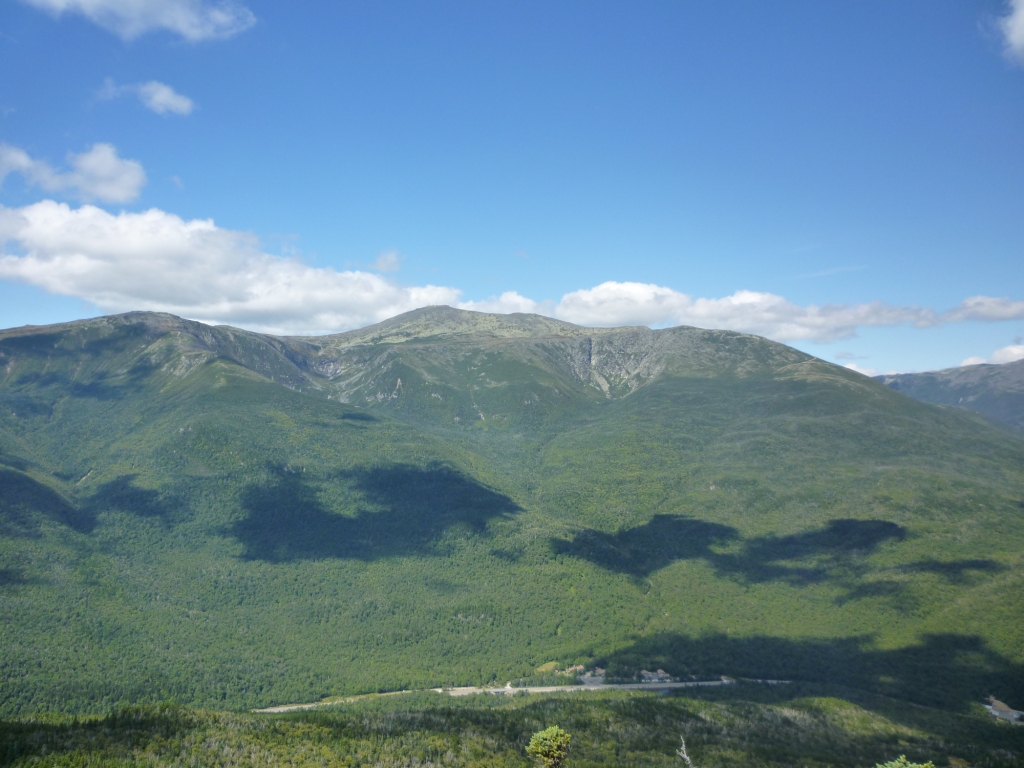 The main drawback of the Wildcat Ridge climb imho is that you can still hear the sound of Route 16 below all the way up to 3,000'. After that you go over a bump and the noise goes away. As we got above 3,700' the grade finally eased off and we were in a beautiful ledgy boreal forest, which was to be the prevailing terrain for most of the rest of the Wildcat Ridge trail. We got to Wildcat E without noticing it - remarkably, there are no cairns on any of the Wildcats. Wildcat E used to be an official 4,000 footer until Bradford Washburn established that Wildcat D was higher (4,060 vs. 4,040). Approaching the col between E and D the top of the ski area came into view, discharging gondola after gondola of fat happy non-hiking folks with flip-flops and cameras and picnics. It was a bit of a downer. So on we went to the platform above the col, to get our pictures taken (left) and get the classic picture of Mt. Washington with its two ravines (right). 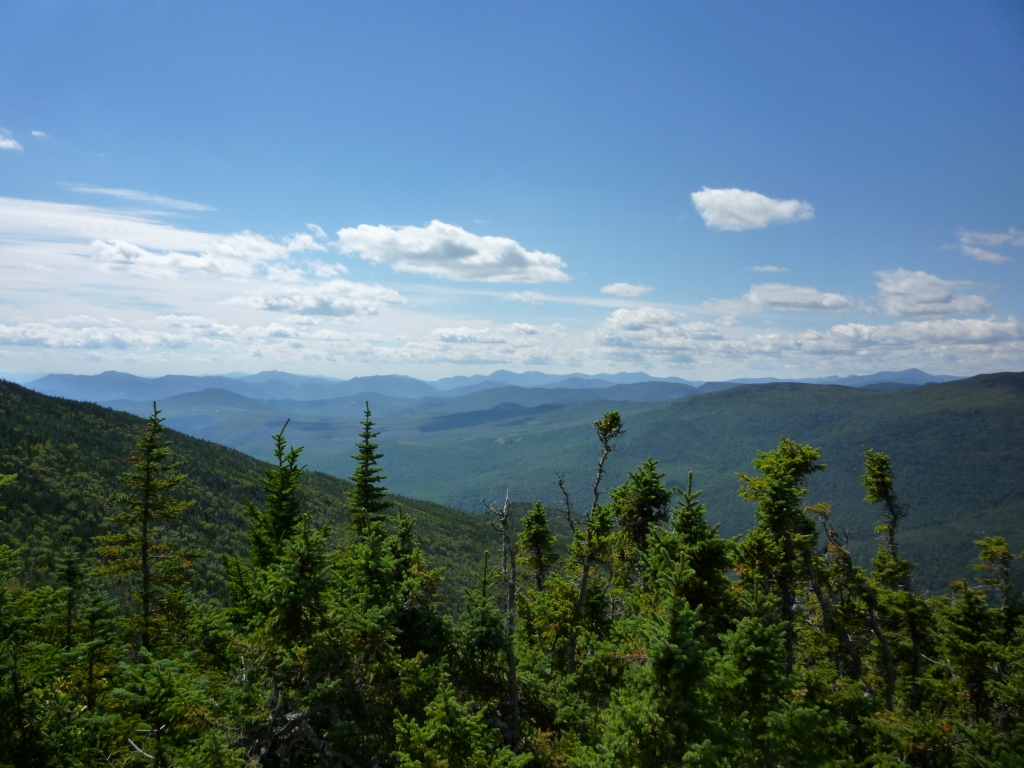 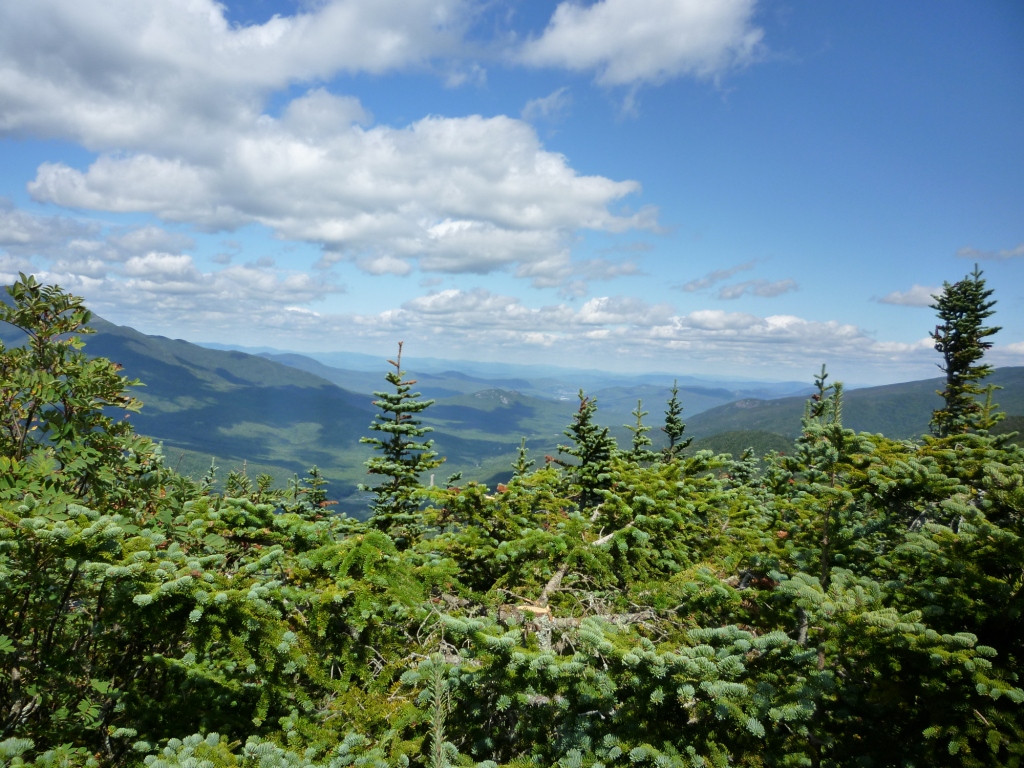 The problem with this classic Mt. Washington view is that, though admittedly beautiful, it does get kind of old. I was more taken by the beautiful views from Wildcat D looking south and north of the Mt. Washington Valley (left and right). Remarkably, even though the Wildcat D platform was just a 5 minutes stroll from the top of the gondola, that was enough to discourage most gondola riders (wheeze) and we mainly had our sprited trio at the top. I took their picture, saying "Cheese! You only have five more peaks to do today" and they reciprocated (above left). 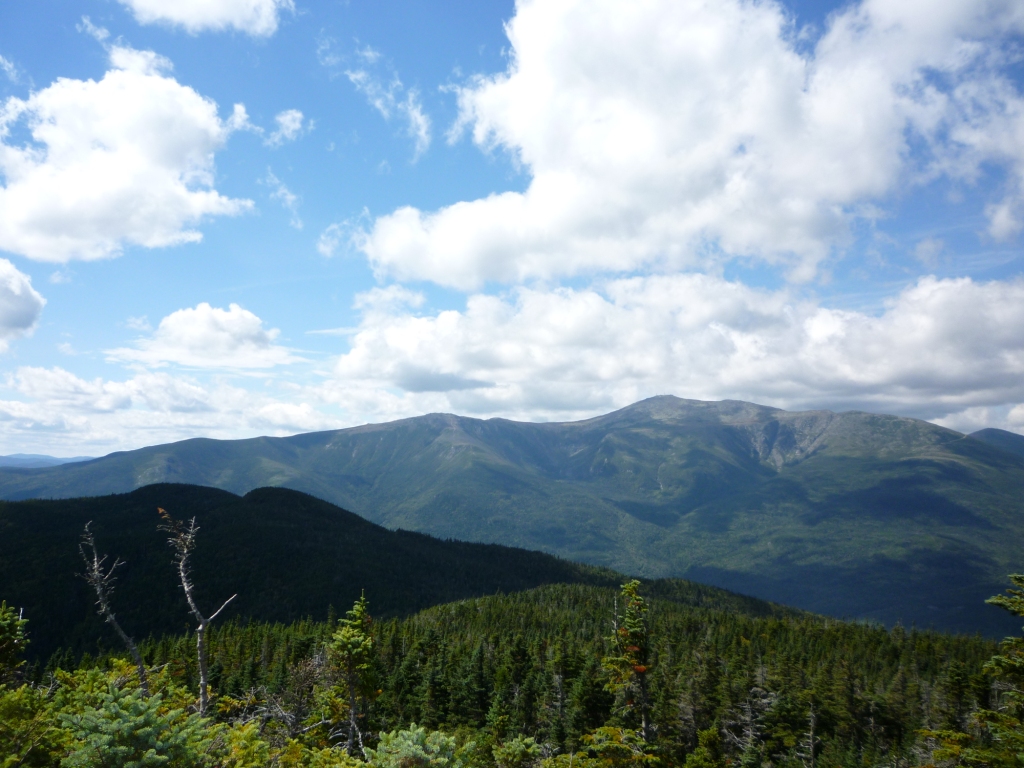 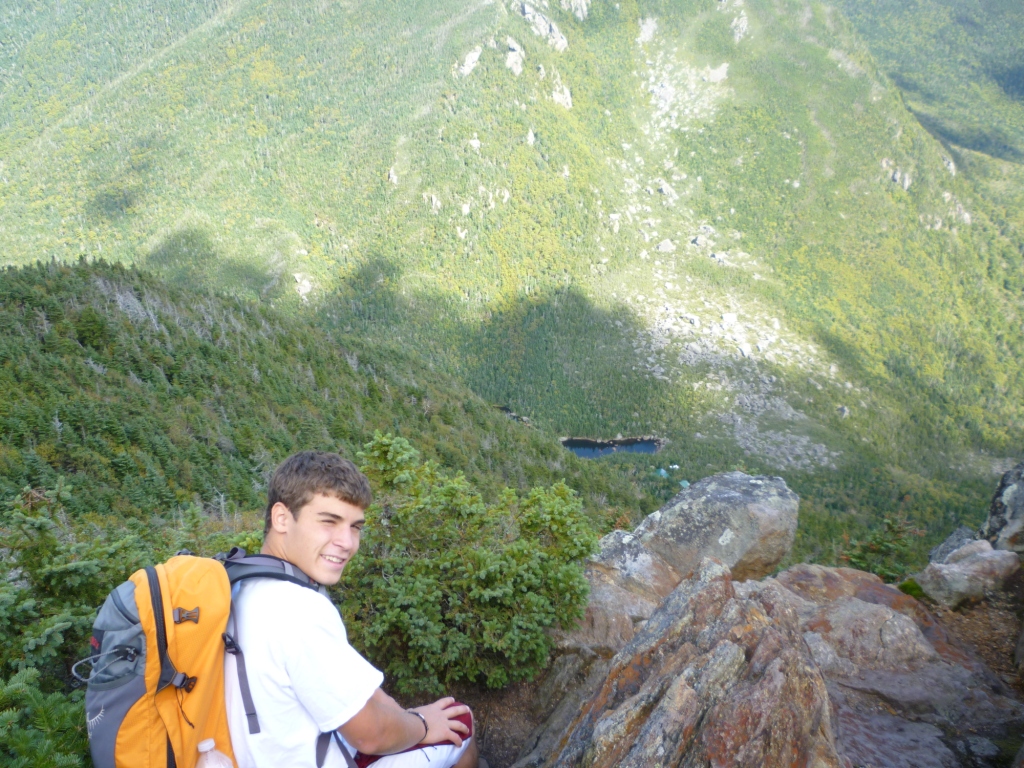 After that it was on to Wildcats C, B, and A - a succession of cols and peaks, none of them marked, but really pleasant ridge walking and occasional nice views such as this one of Wildcat D and E as I climbed to the top of C (left). We finally got to Wildcat A with a superb view down to the Crater Lakes (right). This was Alex's 36th 4,000 footer (Wildcat D was his 35th) - just 12 more to go! 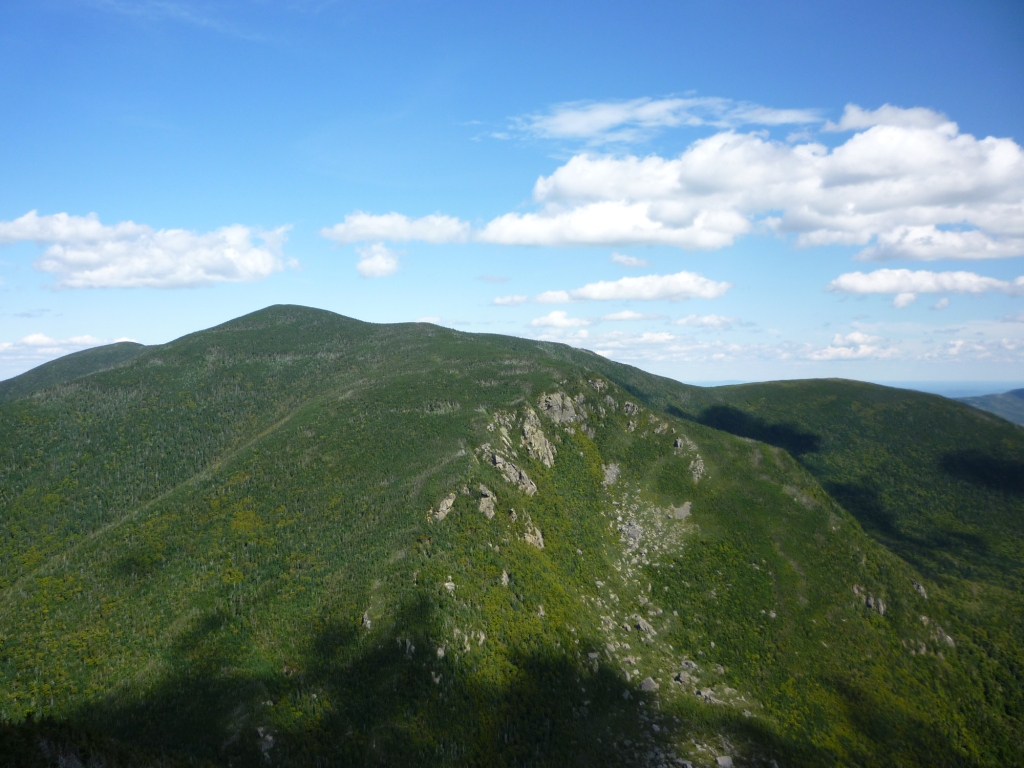 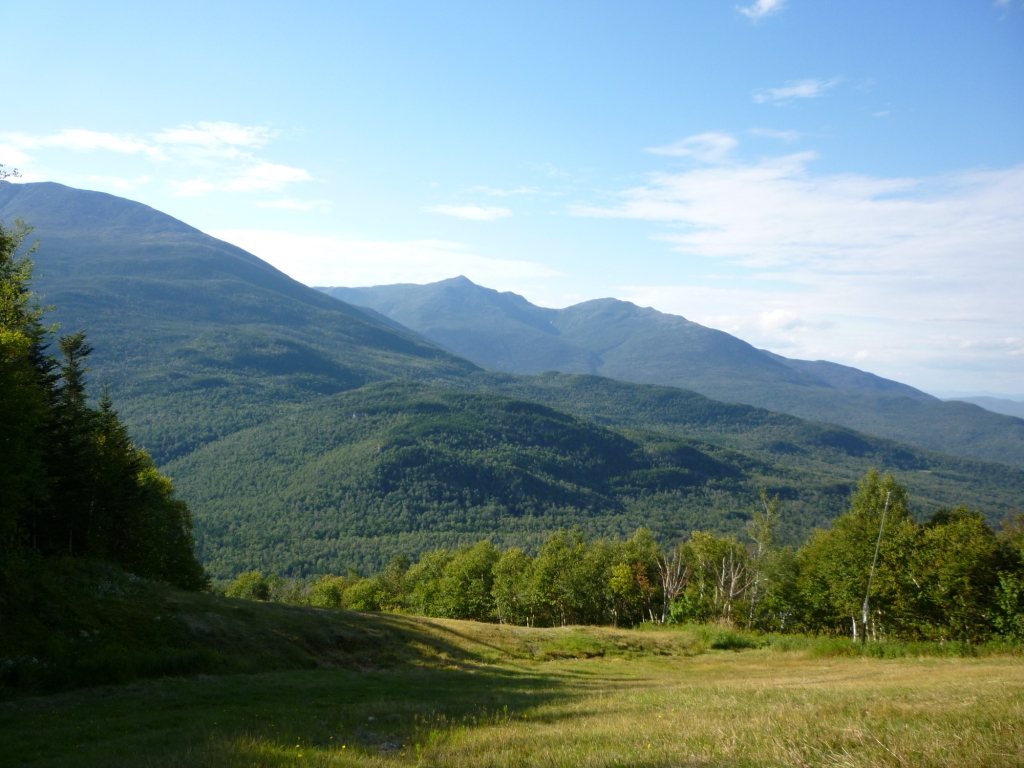 The top of Wildcat A has a beautiful view looking north, toward Carter Dome and the Carters (left). Here we met our death-march trio again, who by now had given up on their epic quest and were just going to go down to Carter Notch and out by 19-Mile Brook. I thought about doing the same because Carter Notch is so nice, but we had done it three weeks before (see our Carter Dome hike) so I decided to go back and down through the ski area. That turned out to work very well, first because the ridge walk coming back was really nice and second because the hike down the ski trails was deserted (I was afraid it wouldn't be) and featuring beautiful meadows and flowers (right) - the kind one associates with the Alps or the West but not New England. So in the end we bagged two 4,000 footers, but most importantly this was a surprisingly nice hike - I will be happy to do it again.