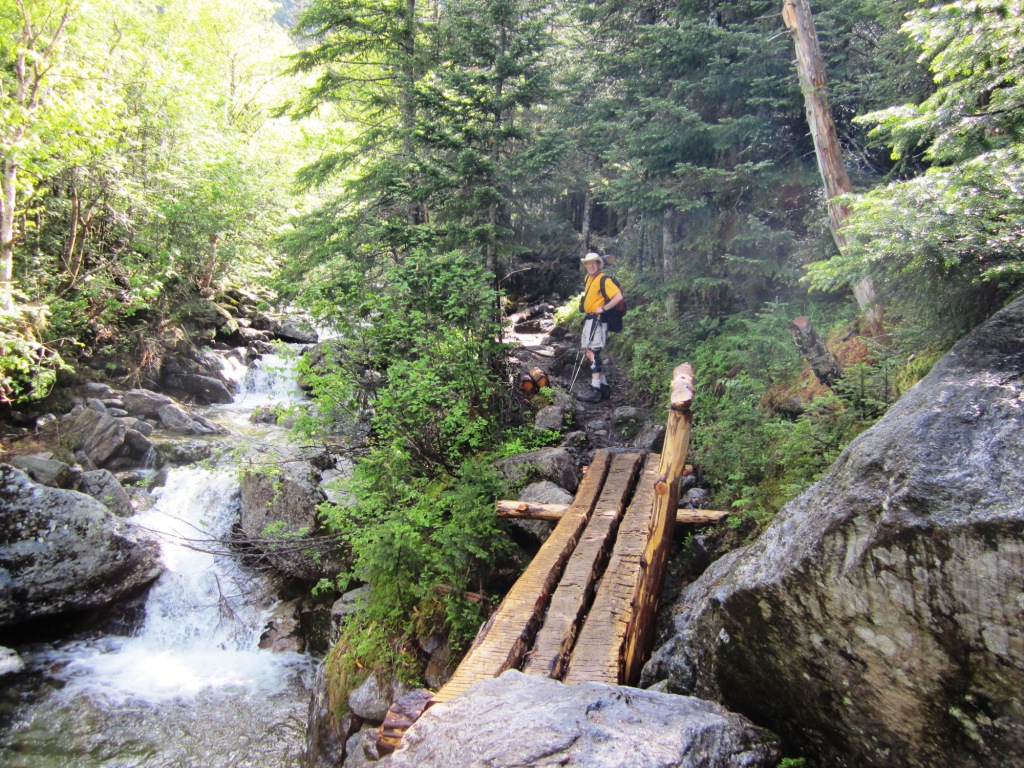 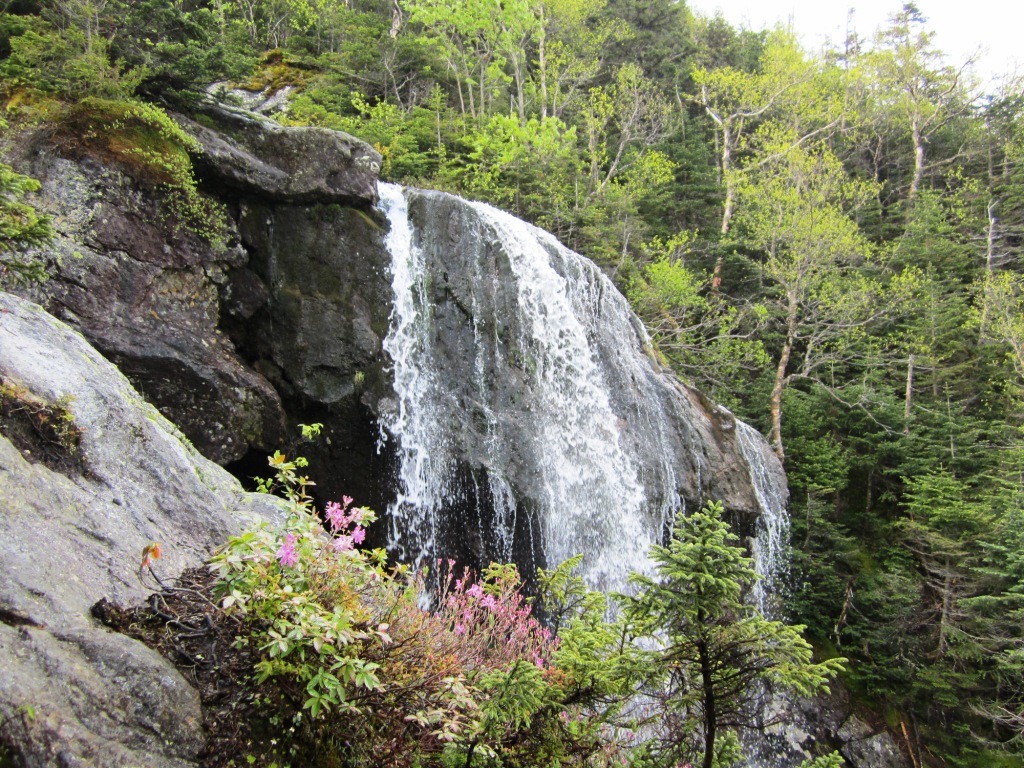 I serve as the AMC volunteer in charge of maintaining the Mt. Clay Loop, so it is a frequently recurring theme of my White Mountains hikes (see my previous visit and references therein). The work mainly involves rebuilding cairns and scree walls since the whole trail is above treeline. Try saying "Clay's cairns" five times rapidly. I'm very fortunate that Roger Gagne and Peter Wyatt have been regularly willing to help me. Over the years we've used different ways of getting there. This time we started on the Ammonoosuc Ravine Trail up to Mt. Washington. We admired a new log bridge to ford a previously tricky spot (left). The trail climbs gently to Gem Pool and then steeply along the Ammonoosuc Falls. It had rained a lot in the past few days and the falls were full of water with a foreground of flowers in bloom (right). 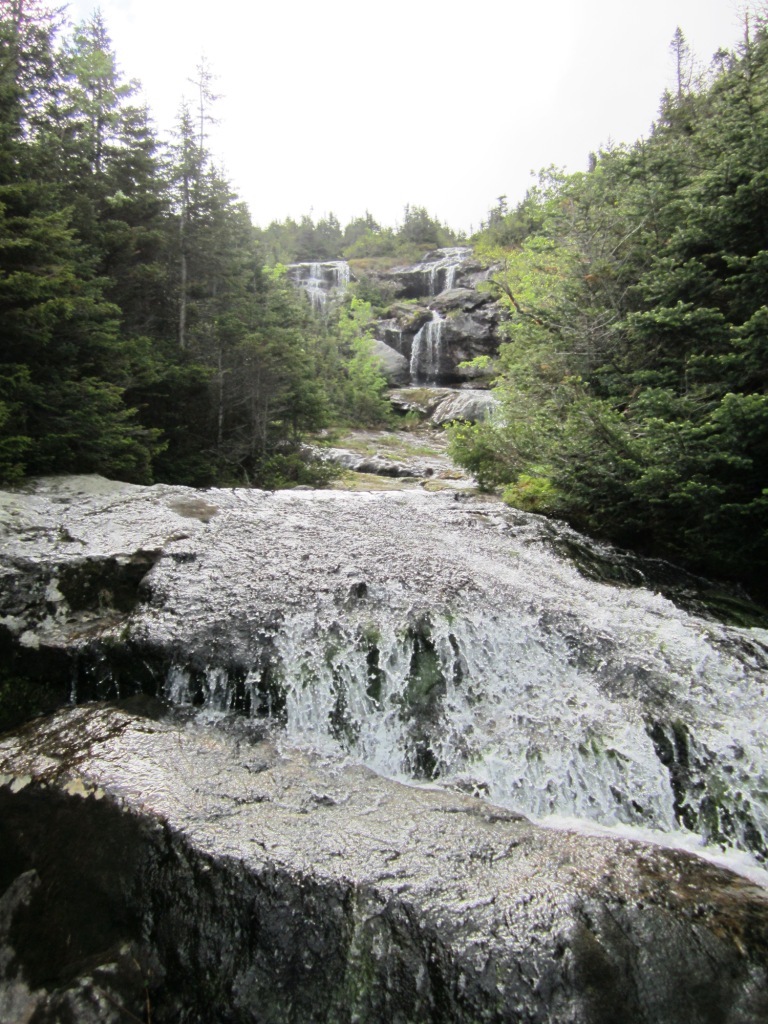 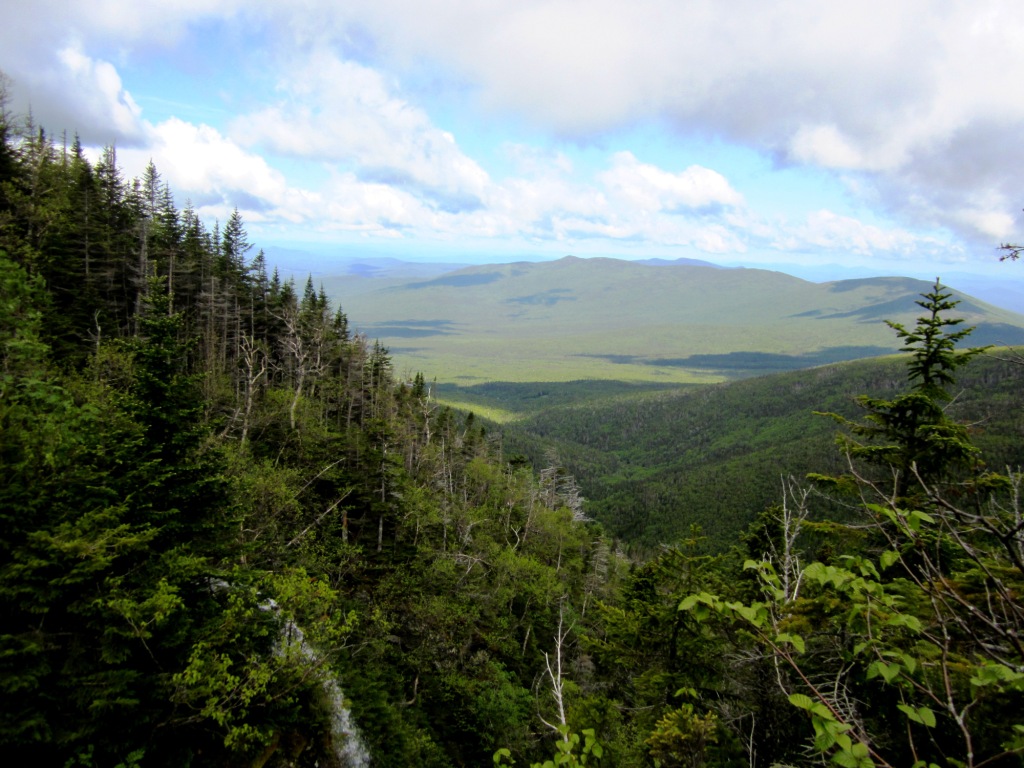 Eventually we got to the top of the falls (left), which is such a nice spot that there's a no camping sign. Looking back gave us a view of Mt. Deception (right), which Peter and I had bushwhacked up some weeks before. 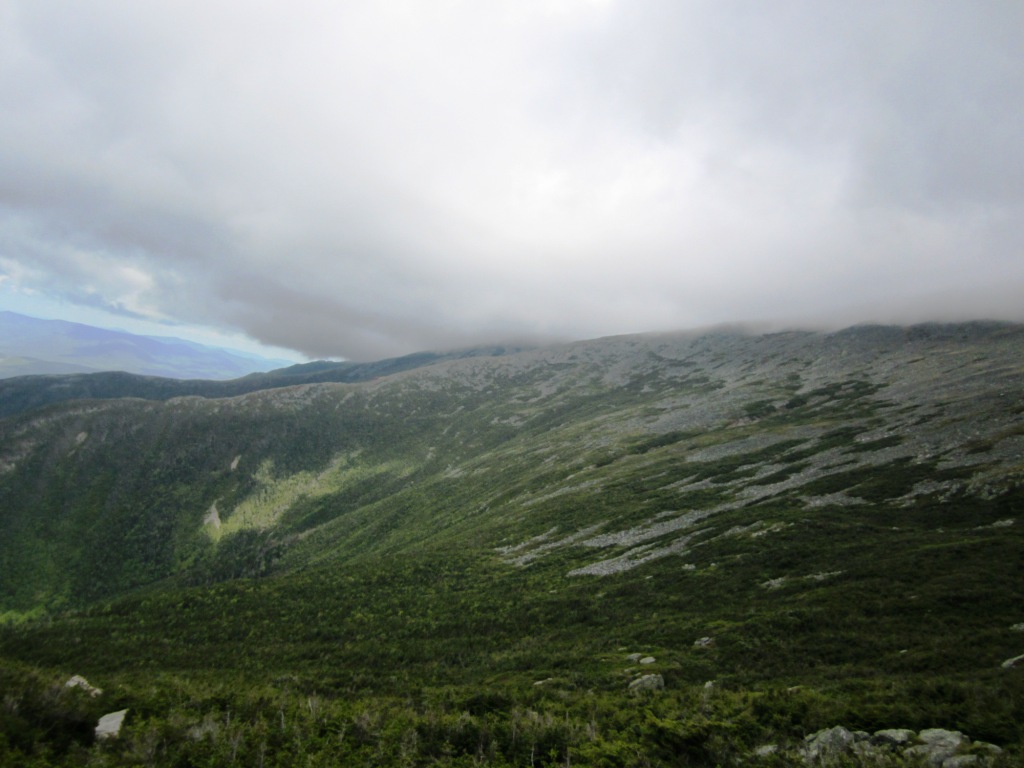 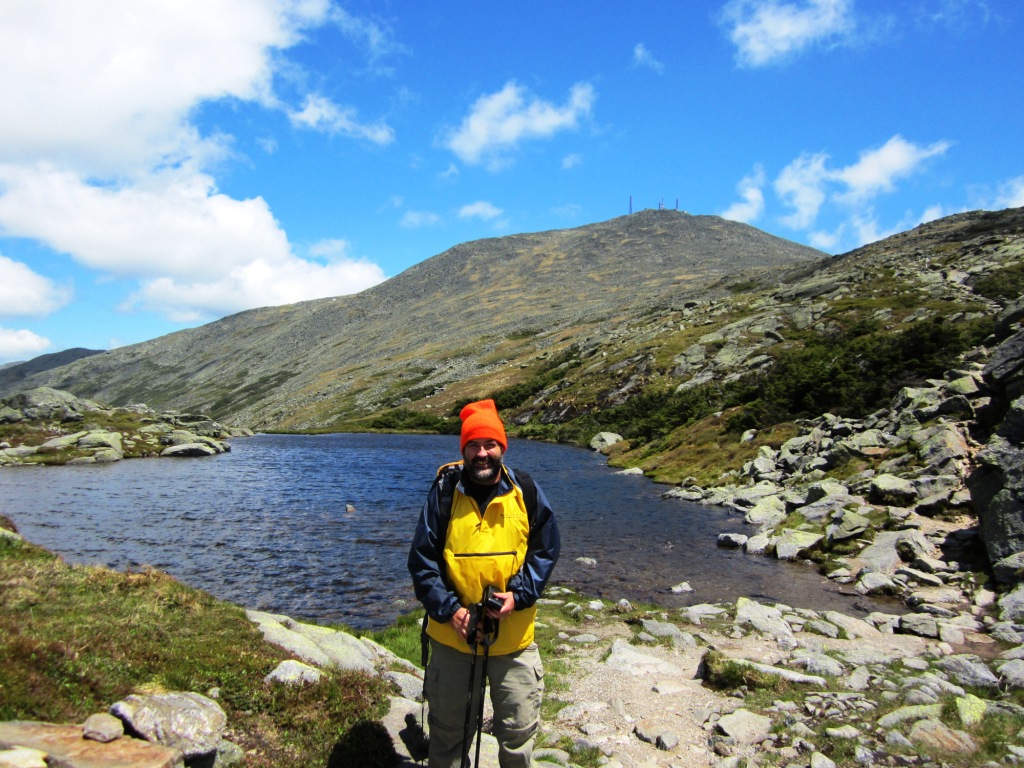 From there a succession of ledges took us quickly above treeline, where fog and cold and wind reigned (left). But we were confident that things were going to clear thanks to the Mt. Washington Observatory forecast, which is an essential reference for hikers going above treeline in the Presidentials. For now we put on all the layers that we had. We stopped at the Lakes of the Clouds hut to warm up and then went onwards up the Crawford Path to Mt. Washington, passing by the beautiful small lakes (right) that were first reported by Darby Field in his historical ascent in 1642. 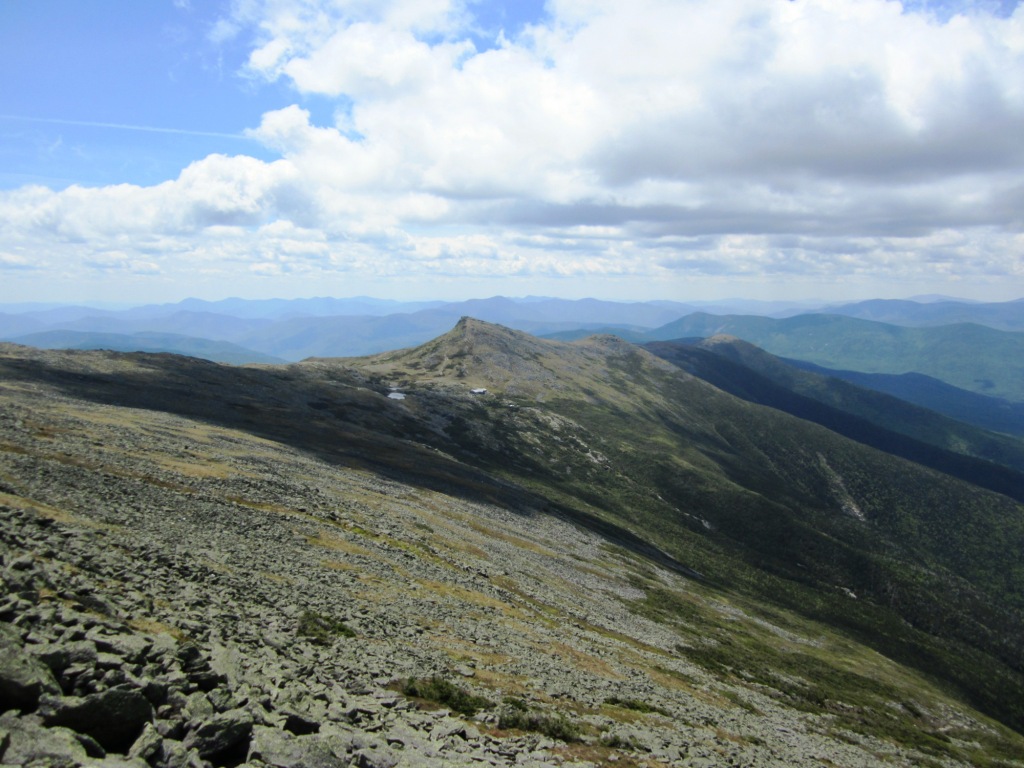 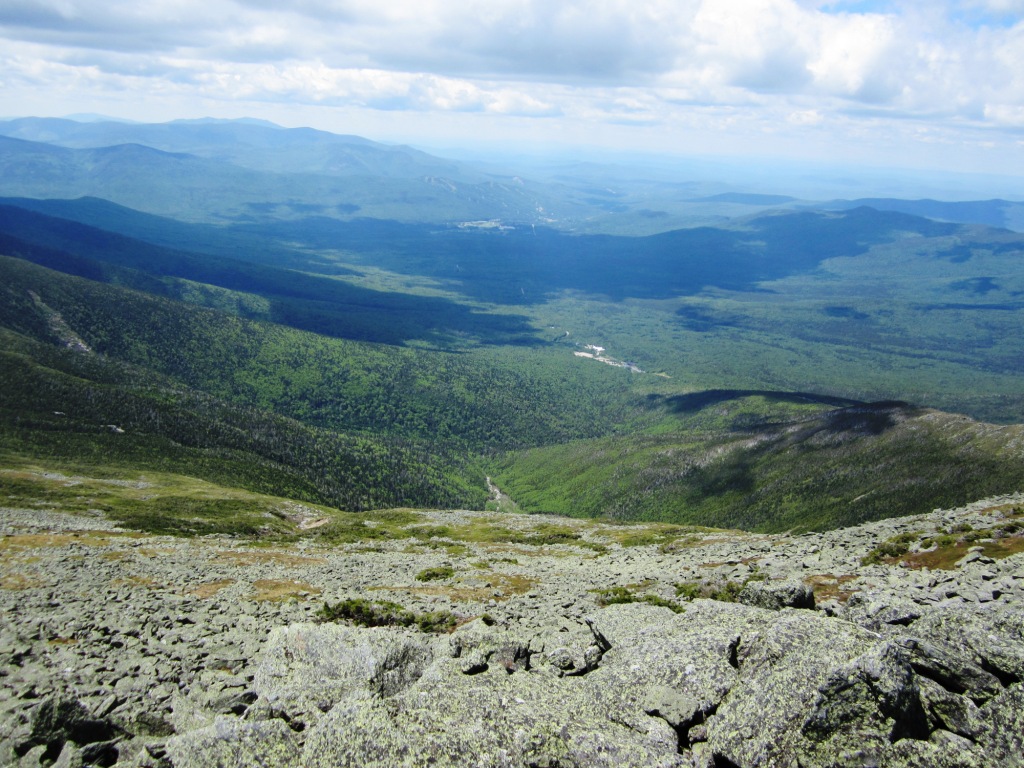 I have climbed Mt. Washington by the Ammonoosuc Ravine Trail a number of times (click here for the previous edition), but this time we forwent the summit and instead branched off at 5,600' on the Westside Trail, which skirts the top of Washington around its west side to join the Gulfside Trail on the north side. I had never done that trail and it is very nice. The weather had cleared as forecast, and we had great views looking back to the southern Presidentials (left) and west towards Bretton Woods and the Franconia Range (right). There were patches of fresh snow here and there. 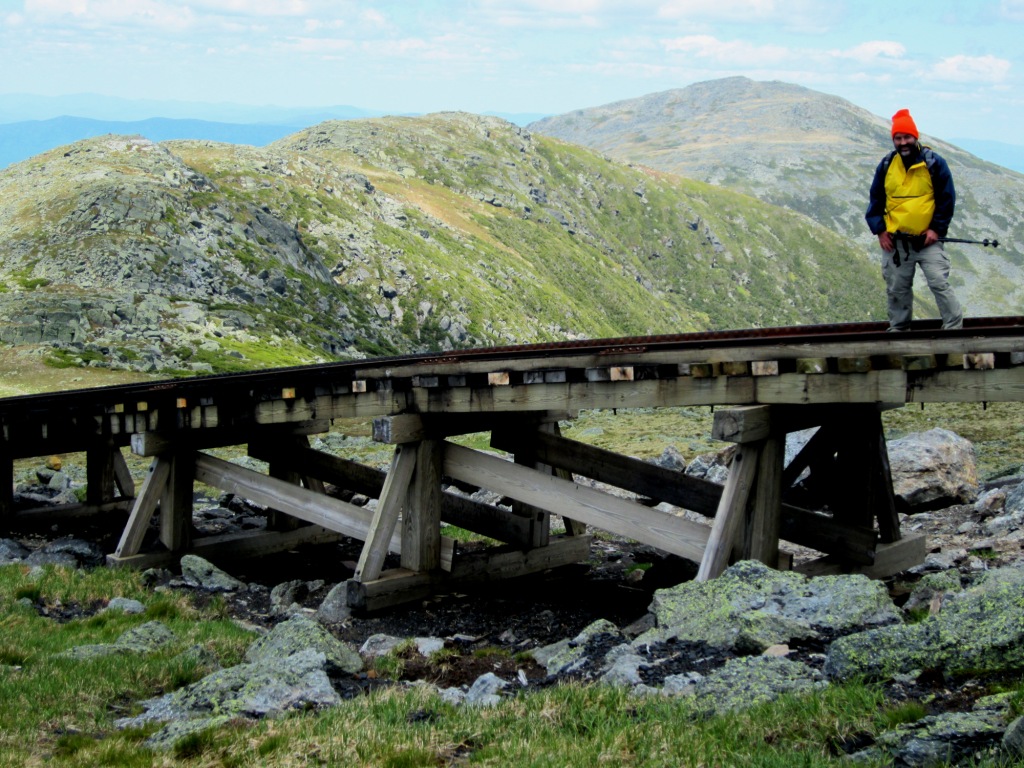 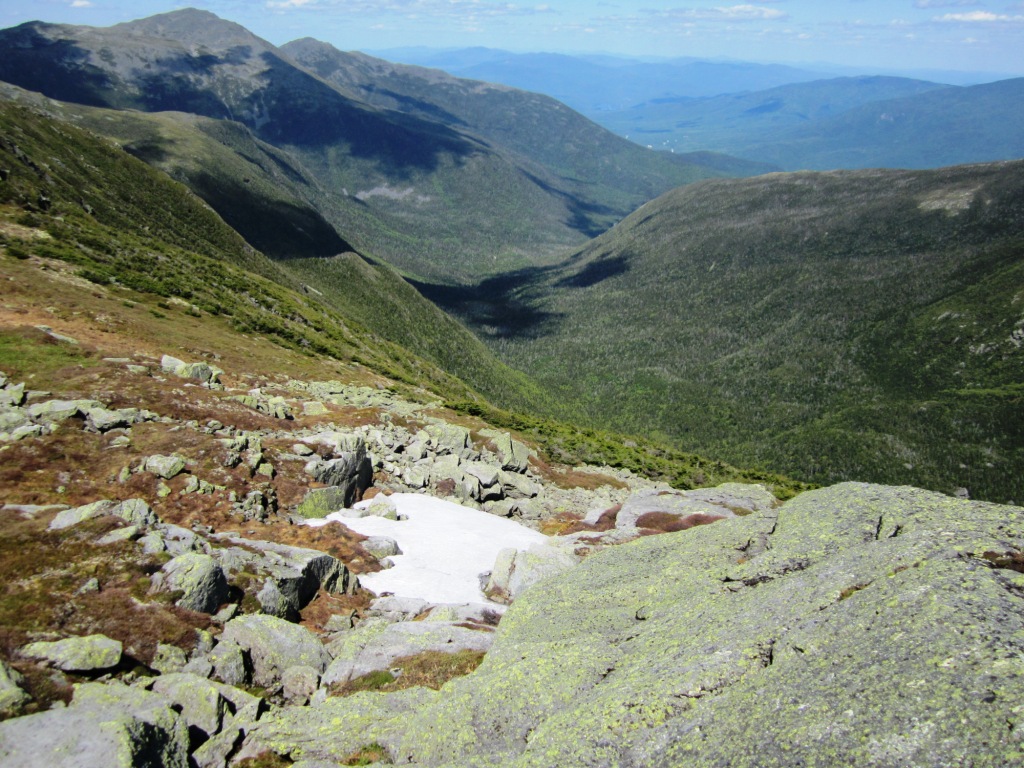 Eventually we crossed the tracks of the Cog Railway that leads up to Mt. Washington (left) and reached the Gulfside Trail which took us to the Mt. Clay Loop. I have reported previously on the Mt. Clay views and cairns and the like (see my latest visit at the link above and references therein). I still can't resist showing a few pictures here. Here's a view of the Great Gulf Wilderness with a patch of snow in the foreground (right) and a view of Spalding Lake nestled in the Wilderness against the wall of the Great Gulf (below left). On my to-do list of hikes is a visit to hard-to-get-to Spalding Lake - stay tuned! 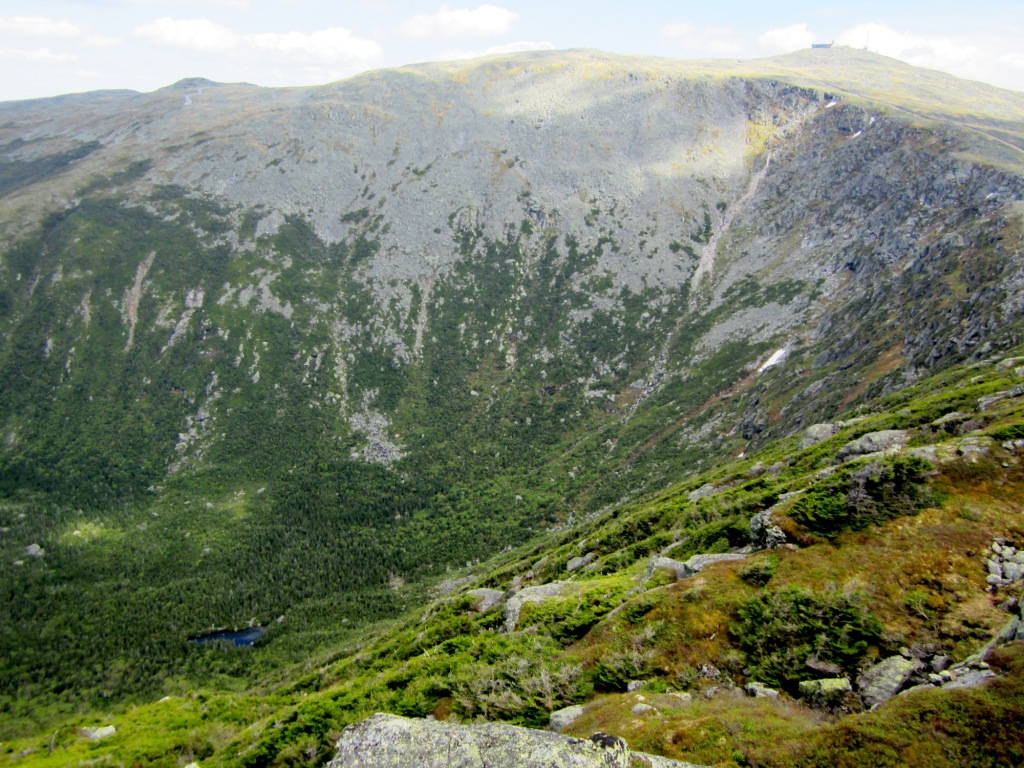 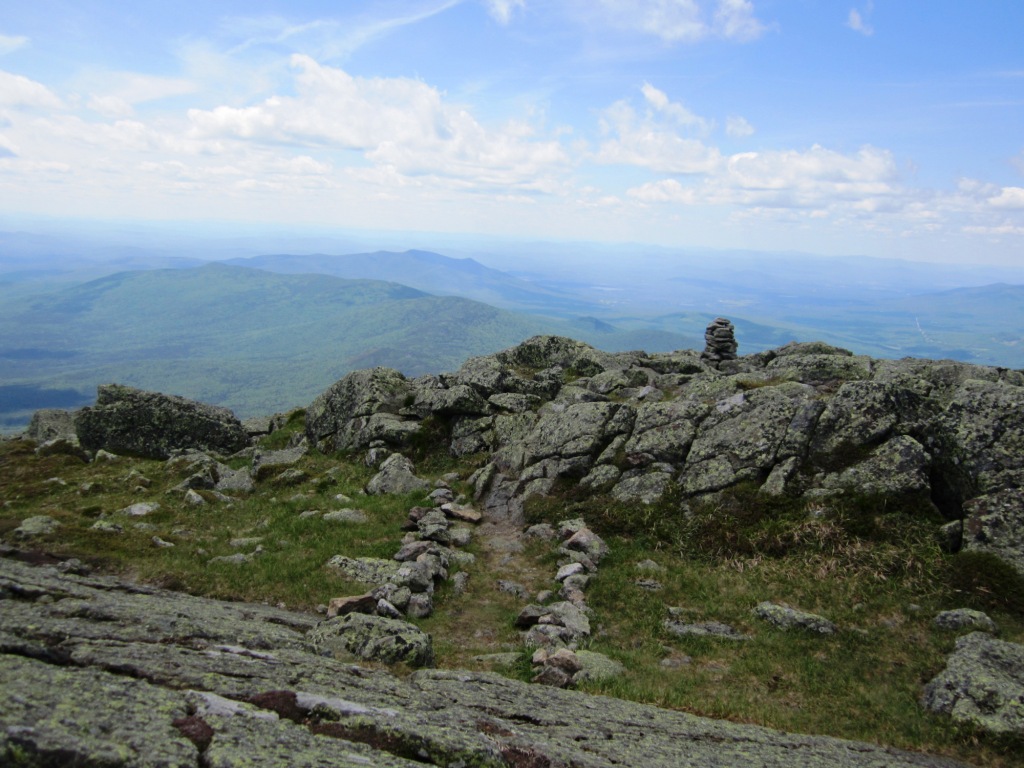 But we weren't here just for views, we had trailwork to do. After two years of my diligent maintenance the Mt. Clay Loop is in really good shape, with cairns and scree walls and rubble all strategically placed and in great condition. Things looked very good - the mild winter probably helped. In particular, we found the scree wall that we built last year on the north peak to be well preserved (right). We built a new cairn in a spot that needed one, fixed a few existing cairns, and put up a new scree wall and rubble at a spot where a false trail was developing. From there it was a down the Jewell Trail back to the trailhead.